US aircraft carrier repositioned in case needed in Iraq 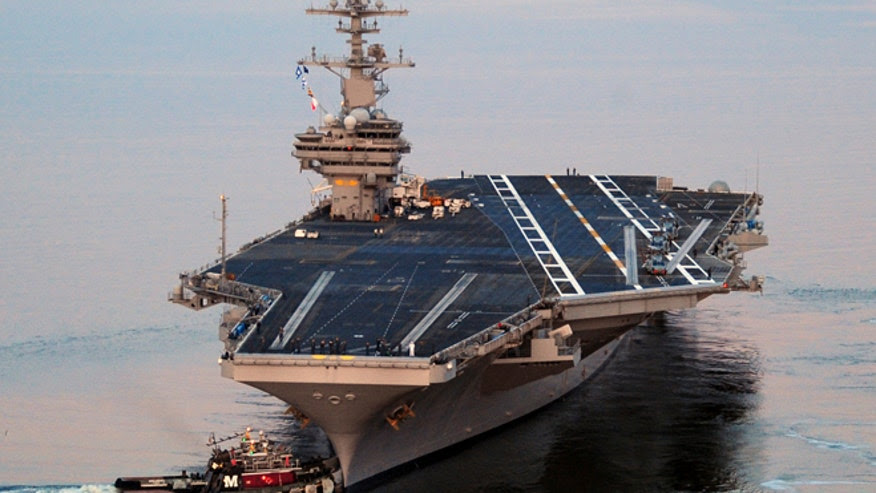 Secretary of Defense Chuck Hagel ordered the carrier to be moved Saturday from the North Arabian Sea to the Arabian Gulf and are expected to arrive sometime this evening.Reuters


The Pentagon said Saturday that the aircraft carrier USS George H.W. Bush will be repositioned to provide President Obama ‘additional flexibility’ in Iraq.
An Al Qaeda splinter group, known as the Islamic State of Iraq and the Levant (ISIS), has been on the move. The group has been conducting an offensive in the western region of the country and threatens stability in Baghdad.
Obama said Friday his administration would not send U.S. troops into combat. He made clear that any U.S. involvement likely would be limited, pressing the embattled Iraqi government to develop a "political plan" and make a "sincere effort" to resolve sectarian divisions.
"We can't do it for them," Obama said.
Secretary of Defense Chuck Hagel ordered the carrier to be moved Saturday from the North Arabian Sea to the Arabian Gulf. The ships are expected to arrive in the area sometime this evening. The air craft carrier will be accompanied by a guided-missile cruiser and a guided-missile destroyer, Rear Adm. John Kirby, a Pentagon press secretary, said. The USS George H.W. Bush, a Nimitz-class carrier, was in the region since February.
The ships carry Tomahawk missiles, which could reach Iraq. The Bush is carrying fighter jets that could also easily get to Iraq, where a fast-moving Islamic insurgency is gaining territory.
Meanwhile, hundreds of young Iraqi men poured into volunteer centers across Baghdad, answering a call by the country's top Shiite cleric to join the fight against Sunni militants advancing in the north.
Dozens climbed into the back of army trucks, chanting Shiite slogans and hoisting assault rifles, pledging to battle the ISIS, which has launched a lightning advance across the country.
The massive response to the call by the Iranian-born Grand Ayatollah Ali al-Sistani, issued via his representative Friday, comes as sectarian tensions are threatening to push the country back toward civil war in the worst crisis since U.S. forces withdrew at the end of 2011.
"Given the current threat facing Iraq, defending the land, honor and holy places is a religious duty," Ayatollah Sistani said, according to The Wall Street Journal.


Posted by firesprinklers at 11:14 AM