(Montgomery County District Attorney's Office/Getty Images)
Posted December 30 2015 — 9:50 PM EST
Bill Cosby was criminally charged with sexual assault for the first time Wednesday after being accused by more than 50 women of wrongdoings over several decades, and new court papers reveal unsettling details about the allegations against him.

Bill Cosby's attorneys respond to sexual assault charge against him

Judge explains why he unsealed Bill Cosby deposition
In a criminal complaint filed in Montgomery County, Pennsylvania and obtained by EW, prosecutors claim that Cosby drugged and assaulted Andrea Constand, a former Temple University employee who considered him a mentor and friend, in 2004.
According to the complaint, Constand met Cosby through her work at his alma mater, and the two developed what she “believed to be a sincere friendship.” The complaint notes that Cosby is 37 years Constand’s senior and “provided her with guidance and career advice.”
Although Constand had “no interest whatsoever in a romantic relationship with Cosby,” prosecutors say, he made sexual advances toward her on two separate occasions before the alleged assault, both at his home. Both times she rebuffed him and departed. “She never thought he would hit on her,” the complaint says, “especially since Cosby is much older than her father.”
Still, the complaint says, Constand “trusted [Cosby] and continued to accept his invitations to social and professional functions.” At some point between mid-January and mid-February 2004, Cosby invited Constand to his Pennsylvania home to discuss her “future career plans,” and once there, he urged her to swallow three blue pills and drink wine to relax.
Constand told investigators that within half an hour, she began experiencing blurred vision, difficulty speaking, and loss of physical strength. Cosby, she said, then sexually assaulted her. Constand woke up in disheveled clothes around 4 a.m. and left.
Within three months of the encounter, Constand returned to her parents’ home in Canada, the complaint says, and her mother took notice of her troubled demeanor. The Constands reported the alleged assault to authorities in Canada, and Constand’s mother reached Cosby on the phone to confront him, at which point he allegedly “apologized and offered to cover any expenses associated with therapy.”
Authorities in Pennsylvania launched an investigation at the time and interviewed Cosby, who maintained that the encounter was consensual. The Montgomery County district attorney’s office reviewed the investigation and announced in February 2005 that no criminal charges were forthcoming, although the DA would “reconsider this decision should the need arise.”
The next month Constand filed a civil suit against Cosby, which was settled in 2006.
Prosecutors recently reopened the decade-old criminal case against Cosby after excerpts from his deposition in the civil suit were released by a federal judge.
Attorneys for Cosby said in a statement Wednesday that the case against him is “unjustified,” adding that they “intend to mount a vigorous defense.”

Posted by firesprinklers at 7:40 PM No comments:

Belgium: Abdeslam still on the loose after recent raids

Obama: We 'will not relent' in fight against ISIS

A father explains Paris tragedy to his son

Deputy Mayor of Paris: 'We have to be ready for anything'

Is assault on Paris a new strategy for ISIS?

Which states will welcome Syrian refugees?

Eagles of Death Metal take stage with U2 in Paris

Jews fearful of another terrorist attack in Paris

Messages of solidarity for a grieving France

Belgium: Abdeslam still on the loose after recent raids

Obama: We 'will not relent' in fight against ISIS

A father explains Paris tragedy to his son

Deputy Mayor of Paris: 'We have to be ready for anything'

Is assault on Paris a new strategy for ISIS?

Which states will welcome Syrian refugees?

Eagles of Death Metal take stage with U2 in Paris

Jews fearful of another terrorist attack in Paris

Messages of solidarity for a grieving France

(CNN)The U.S.-led coalition killed multiple figures withinISIS senior leadership over the last few weeks, including an operative closely linked to the ringleader of the November attacks in Paris, the spokesman for the coalition said Tuesday.
Col. Steve Warren said 10 senior ISIS leaders operating in both Iraq and Syria, "including several external attack planners," with designs on attacking western targets, had been killed in airstrikes.
Charaffe al Mouadan, a Syrian-based member of ISIS with a "direct link" to Abdelhamid Abaaoud, the Belgian-born ringleader of the terror attacks in Paris, was killed in a December 24 airstrike, and was "actively planning additional attacks against the West," Warren said.
Abaaoud was killed in a police raid in the Paris suburb of Saint-Denis last month and had direct contacts, the coalition said, with al Mouadan before the attacks took place, which killed more than 120 people.
In addition to al Mouadan, nine other figures focused on everything from planning attacks on Western targets to overseeing ISIS finances to the organization's hacking efforts were killed in airstrikes dating back to December 7. 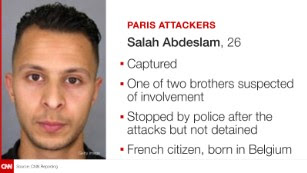 "I think any organization that sees its middle and upper management degraded in this way is going to lose some of their synergy," he said. "It's difficult to command and control an organization without the command and control personnel."
The coalition has also killed other senior ISIS figures in recent months, such Mohammed Emwazi, aka "Jihadi John," and before that Abu Sayyaf, a senior figure in the group's oil and petroleum operations.
Warren's detailing of recent U.S. successes in taking out ISIS figures coincides with a stepped-up effort by the Obama administration to broadcast its wins in taking on ISIS to reassure the American public that it has an effective approach for combatting the terror group.
President Barack Obama held a meeting with his national security team at the Pentagon on December 14 and told them he wanted to see a better job of having the so-called "narrative" of the war on ISIS communicated to the American people, according to a senior defense official.
However, Warren acknowledged Tuesday that, "We have not severed behead of this snake yet, and it has still got has fangs. There's much more fighting to do."
Who was Abdelhamid Abaaoud, suspected ringleader of Paris attack?
And a source close to the investigation into the Paris attacks told CNN that contrary to the coalition depiction of al Mouadan as an ISIS leader, he was not suspected by French investigators of having a senior role in ISIS.
The source did say, however, that he was in touch with the Paris plotters days before the attack. The source said that investigators are still determining the role, if any, he played in the attacks.
The source said that one of the surviving concertgoers at the Bataclan music venue told investigators that one of the gunmen asked another of the attackers whether he was going to call an individual called "Souleymane" as the attack was ongoing.
The second attacker replied, "No," and chided the other attacker, telling him to speak in Arabic rather than in French. Souleymane is one of the known aliases of al Mouadan.
El-Mouadan was a close associate of Samy Amimour, one of the Bataclan gunmen, according to the source, who said both were investigated in 2012 for suspected terrorist activity. According to Le Parisien newspaper, which on December 21 first reported details about the discussion of a call to Souleymane inside the Batclan, al Mouadan traveled from France to Syria in 2013. 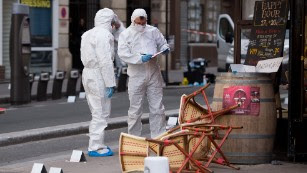 In Syria itself on Saturday, rebel forces supported by the American-led coalition successfully recaptured Tishreen Damin in the northwestern part of the country.
The hydroelectric dam along the banks of the Euphrates River had been under ISIS control since November 2012, and its seizure "denies an important logistics route" between the area which includes the key town of Manjib, and Raqaa, the de facto capital of ISIS's self-declared caliphate, Warren said.
In addition, Iraqi security forces successfully routed ISIS from most of its stronghold in Ramadi in western Iraq over the last few days.
It was after ISIS wrested Ramadi from Iraqi control back in May that Defense Secretary Ashton Carter said Iraqi forces showed "no will to fight" in an interview with CNN at the time, as they retreated in defeat.
His comments stand in stark contrast to the Pentagon assessment of Iraqi military capabilities today.
While pockets of resistance still exist in and around Ramadi, Warren said the Iraqi Army's "willingness to fight is pretty well displayed" through its securing of Ramadi in recent days.
He added that further gains by the Iraqis against ISIS were likely because they are "outfitted with modern American equipment, modern conventional training" and supported by coalition airstrikes.
Warren attributed past defeats of the Iraqi army in places like Ramadi and Mosul, a key Iraqi city where local forces essentially melted away in 2014, to it being an army trained for counterinsurgency and not prepared for the more conventional military challenge posed by ISIS.
Sign up for CNN Politics' Nightcap newsletter, serving up today's best and tomorrow's essentials in politics.
CNN's Paul Cruickshank contributed to this report.


Posted by firesprinklers at 1:06 PM No comments: