Note: Earlier today  while fretting about my bicycle which was stolen last night. I received a telephone call from Karen, wife of my cousin Stan. Apparently one of Karen's daughters family were friends with a family that owned three pizza parlors, and just a  few hours earlier two people in one of those pizza places came in and shot two policemen having lunch.

Karen was understandably quite upset, and we were able to chat for a while.

After we hung up I checked the news.

Sure enough, It was true, today, another pair of misguided souls, insisted and insured, that they get their 15 mins. in this new media age.

Isn't this the same script being practiced by the discontented: get a gun, communicate your grievances against society, girlfriend, wife, government agency, or another perceived hurt, or opponent,  then blow away a few innocents to insure you grab media attention,, then, kill yourself (which was likely the original plan) . 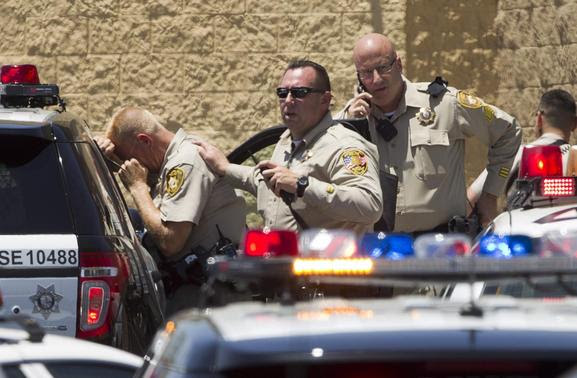 (Reuters) - An armed man and woman shouting about a "revolution" opened fire and killed two Las Vegas policemen who were eating lunch in a pizza parlor on Sunday, then fatally shot a civilian in a nearby Wal-Mart store before killing themselves, police said.
The two uniformed patrol officers, later identified as Alyn Beck, 42, and Igor Soldo, 32 - both described as family men - were ambushed without provocation shortly before 11:30 a.m. local time inside a CiCi's Pizza shop, authorities said.
One of the two officers managed to return gunfire before the suspects fled to an adjacent Wal-Mart, where they killed a bystander inside the front door, then exchanged gunfire with police who pursued them further into the store, Clark County Sheriff Douglas Gillespie said.
Moments later, the female suspect shot her accomplice to death, then took her own life, Gillespie told reporters at a late-afternoon news conference.
A city police spokeswoman, Laura Meltzer, earlier told Reuters that the two suspects died after they "engaged in what is being described as a suicide pact."
She also said the suspects had grabbed the fallen officers' weapons before fleeing to the Wal-Mart, which Gillespie said was true.
Meltzer said that according to preliminary information police received at the scene, one or both of the suspects had yelled a statement to the effect that "This is a revolution" as they carried out the initial attack. Gillespie said in the statement that it was unconfirmed.
He said investigators were also at a loss to explain the attack.
"What precipitated this event we do not know. My officers were simply having lunch when the shooting started," he said.
He added: "It's a tragic day, a ... very difficult day. But we still have a community to police, and we still have a community to protect. We will be out there doing it with our heads held high but an emptiness in our hearts."
He said no information was being released about the identity of the slain bystander, though the Las Vegas Review-Journal reported the victim was a woman.
Gillespie said the two slain officers had been on routine patrol in the East Las Vegas area when they stopped for lunch.
The Review-Journal, citing an unnamed law enforcement official briefed on the incident, reported that the female suspect approached one policeman from behind and shot him in the head as he was refilling his soft drink, then shot the second officer several times as he was trying to draw his pistol.
(Additional reporting by Karen Burns from Austin, Texas and Steve Gorman from Los Angeles; Editing by Eric Walsh)

Posted by firesprinklers at 7:29 PM