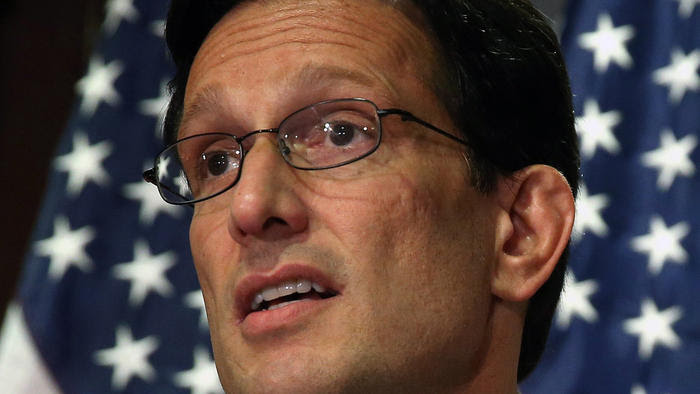 
The stunning primary defeat of Eric Cantor was, by any metaphoric measure, an enormous event: an earthquake, a volcanic explosion, a political tsunami.
But, at bottom, it also underscored some of the essential truths of politics, none more so than that old chestnut — oft-quoted and ascribed to the late ex-House Speaker Tip O’Neill — that all politics is local.
And, it might be added as a corollary, woe to the politician — whatever the office or his or her presumed import — who takes reelection, and, by extension, the people he or she represents, for granted.
CAPTIONEaster at the White House
Carolyn Kaster / AP
President Obama, First Lady Michelle Obama and the Easter Bunny stand with their hands on their hearts as Cam Anthony sings the national anthem at the annual White House Easter Egg Roll on Saturday.
CAPTIONSebelius is out
Mark Wilson / Getty Images
President Obama and Vice President Joe Biden applaud outgoing Health and Human Services Secretary Kathleen Sebelius during a news conference in the White House Rose Garden on April 11. Sebelius, who oversaw the rocky rollout of the Affordable Care Act, resigned after five years in the post.
CAPTIONCivil Rights Act at 50
Pool / Getty Images
President Obama and First Lady Michelle Obama take the stage at the LBJ Presidential Library April 10 during a summit marking the 50th anniversary of the passage of the 1964 Civil Rights Act.
CAPTIONObamacare for 7 million
Win McNamee / Getty Images
More than 7 million Americans signed up for health coverage during the Affordable Care Act's open enrollment period, President Obama tells supporters and lawmakers at the White House on April 1.
CAPTIONLast call for Obamacare
Drew Angerer / Getty Images
In the final hours of Obamacare's first open enrollment period, Vice President Joe Biden talks to attendees at an Affordable Care Act signup site in Washington, D.C.
Rep. Cantor of Virginia was the No. 2 Republican in the House leadership and, both logically and politically, the heir to House Speaker John Boehner of Ohio. There was even talk of Cantor someday running for president and, if his dreams were realized, becoming the first Jewish president in U.S. history.
However, that  leadership position and Cantor’s unrequited ambition meant a great deal of time and travel away from his district, which left him ripe for attack by his underfunded, little-regarded challenger, college professor Dave Brat.
lRelated 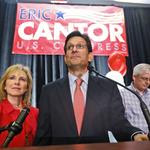 SEE ALL RELATED
8
That argument — that a lawmaker has lost touch with the folks back home — is another old political standby; it produced a similarly historic upset in 1994 by Republican George Nethercutt, who ousted then-House Speaker Tom Foley in the national GOP wave.
“We need a listener,” Nethercutt repeatedly told voters, “not a speaker.”
Cantor had the burden, as do all congressional leaders, of serving dual masters, his constituents and the national needs of his party. Those are increasingly diverging in a GOP split between what might be called, for simplicity's sake, the pragmatists and the purists.
Republican congressional candidate David Brat of Virginia displays an immigration mailer by Congressman Eric Cantor during a news conference in Richmond in May. (Steve Helber / Associated Press)
The pragmatists believe that compromise is a necessary part of the political process. The purists, the animating force of the tea party movement, would rather lose elections than surrender what they believe to be fundamental conservative principles.
Perhaps the most important flashpoint has been over the issue of immigration. Many Republicans believe the party must join Democrats, for survival's sake, to pass some form of legalization for the millions in the country without legal documentation. Others call that amnesty, the battle cry that Brat used in the race against Cantor, who supported some easing of immigration law.
cComments ADD A COMMENTSEE ALL COMMENTS
1
Too late did Cantor realize the strength of Brat and, more broadly, voters' disdain for the type of give-and-take required of someone in Cantor’s position. A last-minute blast of ads that underscored his concern went nowhere.
“This is the grass roots flexing its muscle and reminding members of the Republican leadership — and reminding all Republicans — that this is a very conservative party at the grass roots and they’re angry,” said Stuart Rothenberg, who analyzes campaigns nationwide for his nonpartisan Rothenberg Political Report.
“And they care more about their anger and expressing their anger and electing someone who will express their anger than they care about electing someone who gets the best deal in negotiations with the White House or the Senate.”
The ouster of Cantor was widely seen as a victory for the tea party, and it most assuredly was.
But also on Tuesday night, two-term  Sen. Lindsey Graham easily romped past six primary opponents in South Carolina, a pugnaciously conservative state that had been a hotbed of tea party support. Indeed, Graham was once seen as one of the most vulnerable Republican incumbents facing a primary challenge this year.
He bent some, but not much, in the direction of his party’s purists. Mostly, though, Graham sneered at his tea party challengers and said he wanted not just to win, but to pound his opponents into South Carolina’s dirt, to show there was still a place for compromise inside the GOP.
The key difference was that Graham knew he had a challenge and responded forcefully, raising a small fortune by South Carolina standards, starting his campaign early and stumping tirelessly.
Two states, two vastly disparate outcomes and one fundamental truth, which illustrates why Tip O’Neill, dead for 20 years, is gone but not politically forgotten.
@markzbarabak

Posted by firesprinklers at 9:53 PM