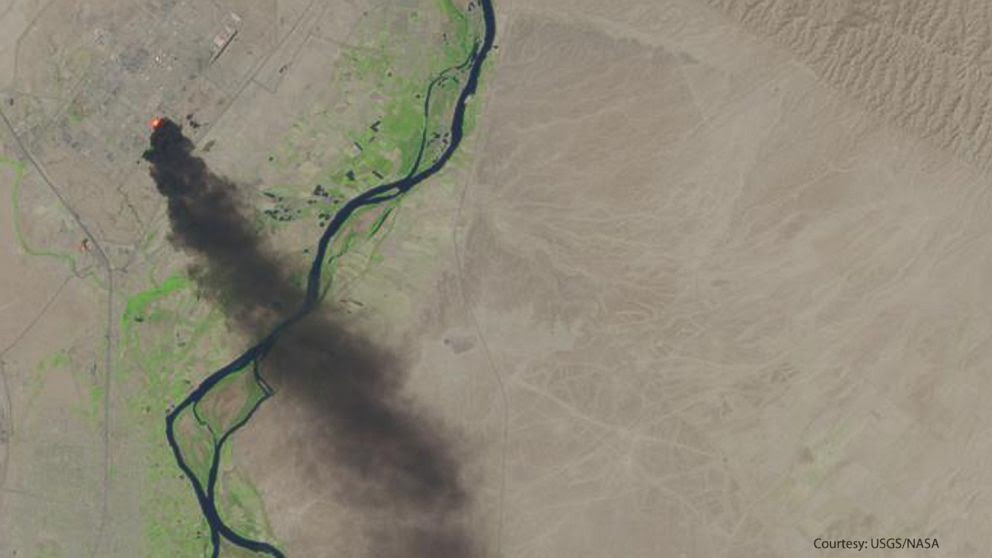 This photo from the U.S. Geological Survey and NASA shows a satellite view of smoke billowing from the Baiji North refinery complex on June 18, 2014 in Baiji, about 130 miles north of Baghdad, Iraq.
USGS/NAS

Iraqi troops battling for control of the vital Baiji oil refinery are outnumbered, surrounded and trapped inside the facility, U.S. source told ABC News.
The battle for the refinery was in its fourth day today, although fighters for the radical Islamic militia ISIS have apparently taken control of much of the facility and are willing to keep the government forces isolated until they run out of food and ammunition, sources said.
"There is very little the Iraqi government can do to save or liberate those guys," a U.S. official told ABC News.
The loss of the Baiji refinery, located 130 miles north of the capital Baghdad, would be a serious blow to the government of President Nouri al-Maliki. After rapidly sweeping through the northern city Mosul and driving south past Tikrit last week, ISIS - which stands for Islamic State of Iraq and Syria - moved to expand their reach by attacking Baiji.
Obama To Send Up To 300 U.S. Military Advisers To Iraq
Boehner Says Obama Should 'Absolutely Not' Coordinate With Iran On Iraq Crisis
Both sides have claimed to be in control of the facility, but witnesses have reported that ISIS has hung its black banners from the refinery. And thick black smoke can be seen on satellite photos coming from the refinery as a result of the battle.
There are approximately 270 Iraqi Security Forces inside, including counterterrorism forces, trying to hold off 300 to 500 ISIS fighters, sources said. The defenders have been helped by Iraqi attack helicopters, but have been unable to dislodge the ISIS fighters who have completely surrounded the sprawling Baiji grounds.
Sources told ABC News that the government troops do not have enough supplies inside to survive for a long time, and they can't get out. In addition, Iraq has been unable to send reinforcements because the road to Baiji is controlled by the militants, the source said.
The Maliki government has yet to mount a counteroffensive to roll back the ISIS blitzkrieg, although thousands of Shiite Iraqis have rallied to the government's side to defend against ISIS, which is composed of Sunni Muslims.
Maliki's regime suffered another blow today when Grand Ayatollah Ali al-Sistani, the spiritual leader of Iraq's Shiites, called for a new, "effective" government.
"It is necessary for the winning political blocs to start a dialogue that yields an effective government that enjoys broad national support, avoids past mistakes and opens new horizons toward a better future for all Iraqis," al-Sisanti said.
President Obama has also criticized the Maliki government for alienating the country's Sunni population.
Obama has declined to launch U.S. bombers against ISIS, but said Thursday he will deploy as many as 300 U.S. special forces soldiers to help train and advise Iraqis in their battle with ISIS and the Sunni tribes that have joined them.

Posted by firesprinklers at 9:49 AM