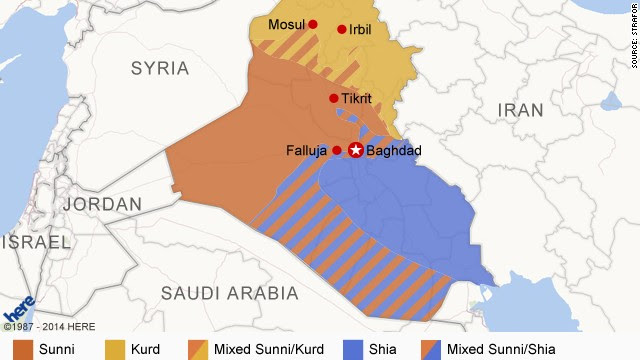 STORY HIGHLIGHTS
Baghdad, Iraq (CNN) -- At least 57 Iraqi civilians were killed and more than 120 others were wounded by what local officials say were Syrian warplanes that struck several border areas of Anbar province Tuesday.
Sabah Karkhout, the head of Iraq's Anbar provincial council, told CNN that the attacks struck markets and fuel stations in areas such as Rutba, al-Walid and Al-Qaim.
"Unfortunately, (the) Syrian regime carried out barbarian attacks against civilians in Anbar province," he said Wednesday. "Today, we will hold an emergency meeting in Ramadi to address this issue."
Karkhout said he was certain the warplanes were Syrian because they bore the image of the Syrian flag.
"Also, the planes flew directly from Syrian airspace and went back to Syria," he said.

Kerry to Iraq: 'Words are cheap'

Iraqi Kurdish leader on region's future
Local officials said residents used scopes and other equipment to see details on the warplanes.
CNN is seeking a response from the Syrian government in Damascus.
Iraq's border region has been targeted by Syria in the past -- as the Syrian conflict escalated in 2012, there was at least one instance where rockets fired from Syria landed in Al-Qaim.
Iraq's Foreign Ministry said at the time that it was ready to respond in the event of additional attacks from Syria, but the Iraqi government was noticeably quiet after Tuesday's incursion.
The claims come as Iraqi forces continue fighting radical Sunni militants from the Islamic State in Iraq and Syria.
In recent weeks, ISIS has taken over swaths of Iraq in its attempt to create an Islamic state stretching from Syria to Iraq.
Inside Syria, the government, for the most part, appears to have avoided directly targeting ISIS, even though the group's positions are well known. Only in the last week did the Syrian regime intensify strikes on Raqqa, a border town on the Syrian side that ISIS controls.
Whether the strikes signify a concerted effort by Syria to intensify its fight against ISIS is yet to be seen. It is also unclear whether the Syrian strikes in Iraq were a unilateral action or were coordinated with the Iraqi government.
Al-Maliki slams Sunnis
The sectarian rift in Iraq may have widened Wednesday when Iraqi Prime Minister Nuri al-Maliki blamed his political rivals for "coordinating" the crisis.
Al-Maliki, a Shiite, accused Sunnis of collaborating with militants and slammed the call to have a national salvation government that would remove him from power.
"Iraq is facing a cross-border terrorist attack that is supported by some neighboring countries," al-Maliki added in a televised speech Wednesday.
He appealed to his Shia constituency by saying he is adhering to the wishes of Shiite religious leader Ali Sistani, who called for volunteers to support the Iraqi army and government.
Is Baghdad ready for an ISIS attack?
Meanwhile, on the outskirts of Baghdad, the eerie sparseness of a major highway raises questions about whether the capital would be prepared for a militant invasion.

Why should Americans worry about ISIS?
The Iraqi military insists it's ready to beat back ISIS if the fighters reach Baghdad.
A post-battle video purportedly shows army forces celebrating a victory over ISIS just west of Baghdad. The bodies of two militants are draped over the hood of a Humvee.
"Look at those ISIS! We killed them!" one man says in the video.
But the opponents are formidable. ISIS fighters have captured cities and towns across Iraq in its effort to create an Islamic state.
And the highway from Baghdad to Abu Ghraib in Anbar province showed few signs of readiness for ISIS.
No tanks or big guns could be seen, CNN's Nic Robertson said. What used to be a thriving roadside marketplace now looks like a deserted wasteland.
It's unclear what lies farther down the highway, but images on the Internet suggest a dire situation. Photos posted by ISIS show two soldiers sitting cross-legged on the ground, guns pointed at their heads.
Who has what?
Iraq's military spokesman, Maj. Gen. Qassim Atta, said security forces had regained control of two key border crossings after briefly losing them to the militants.
Atta said Iraqi forces, aided by Sunni tribes, retook al-Walid, which connects Iraq with Syria. He also said Iraqi forces regained the Trebil border crossing between Iraq and Jordan.
He also said that all towns between Samarra and Baghdad, 80 miles (129 kilometers) to the south, are in the hands of Iraqi security forces.
But large swaths of Iraq, particularly in the north and west, have fallen from government control to the hands of ISIS.
U.S. officials say they think ISIS now has as many as 10,000 fighters in Iraq and Syria. But is unknown, officials say, exactly how many are in Iraq because it's not clear how many go back and forth across the Syrian border and how many loyalists have joined ISIS as it has taken over various towns.
The United States is expected to have about 300 military advisers in Iraq. On Tuesday, 90 arrived from outside the country, said Pentagon spokesman Rear Adm. John Kirby.
The advisers are expected to assess the situation on the ground and then "advise and assist" Iraqi military forces as they counter the threat from ISIS militants, Kirby said.
The spread of ISIS
Jordanian Foreign Minister Nasser Judeh said he fears the strength of radical militants could spill further across borders.
"We've been saying for a while that the rise and spread of extremism and the politics of exclusivity will threaten the security of the entire region," Judeh told CNN's Becky Anderson.
"The root cause of ethnic and sectarian division, the root cause of instability and the rise and spread of terrorism and extremism has to be addressed."
Facebook looks to block ISIS clothing sales
Kerry: 'Words are cheap' but promising in Iraq
Opinion: Afghanistan, the next Iraq?


Posted by firesprinklers at 8:12 AM