Federal experts to help search for firefighter missing in forest

Experts in finding people in rugged, uncharted terrain from the U.S. Immigration and Customs Enforcement agency were scheduled to arrive in Los Padres National Forest on Thursday to assist in the ongoing search for a missing Arcadia firefighter, officials said.
Mike Herdman, 36, disappeared Friday night when he chased his dog after it ran away from the campsite he and his friend had set up. Herdman, an avid outdoorsman and paramedic, was barefoot and wearing only shorts and a T-shirt when he ran off, authorities said.

Related story: Rescuers may have spotted dog of firefighter missing in forest

Robert J. Lopez
It took his friend two days to make the hike out of the forest and alert Ventura County sheriff’s deputies, who launched their search at sunrise Monday.
Since then, each day has brought a new development for searchers.
On Monday crews found the campsite from which Herdman disappeared, as well as his backpack and footprints, but no evidence that he had returned to the site since vanishing. 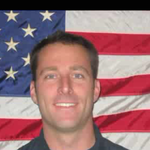 On Tuesday searchers found more footprints south of the site near a creekbed, and on Wednesday a dog believed to be Herdman's was briefly spotted in a remote area northwest of Sulphur Peak not far from Sespe Creek. Deputies said the sighting is a positive sign because the dog likely would stay near its master.
“We’re still holding out hope that we’ll find him safe,” said sheriff's Sgt. Eric Buschow.
Crews on Thursday will focus on where the dog was seen the day before, Buschow said. More than 50 people have been searching on foot, horseback and from the air.
Orange County Sheriff’s Department search-and-rescue workers who had been assisting the effort had to leave Wednesday to conduct their own search back home.

That’s when the ICE searchers volunteered to help, Buschow said. They’ll work alongside crews from San Luis Obispo, Ventura and Los Angeles counties.
“It’s hard to describe just how daunting a task this is,” Buschow said. “You see how vast the mountains out here are -- crews are not just hiking through, they’re literally going rock to rock, tree to tree because they’re actually searching for a person. It’s a painstaking, tedious task.”

cComments
ADD A COMMENTSEE ALL COMMENTS
7

One search team member had to be airlifted out Wednesday because of a leg injury, Buschow said. All the crews searching on foot have to be flown into the area because hiking in would take more than a day, he said.
For breaking California news, follow @JosephSerna.
Copyright © 2014, Los Angeles Times


Posted by firesprinklers at 9:45 PM