Baghdad, Iraq (CNN) -- A strategic border crossing and three other towns in western Iraq fell Saturday to the control of ISIS militants, a senior Iraqi security official said.
In addition to their offensives in northern Iraq, the militants have now strengthened their hand in the western province of Anbar, the country's largest geographically, and were controlling Al-Qaim, Rawa, Ana and Husaybah, said the senior official, who's based in Anbar.

Secret video of ISIS smuggled out of Iraq 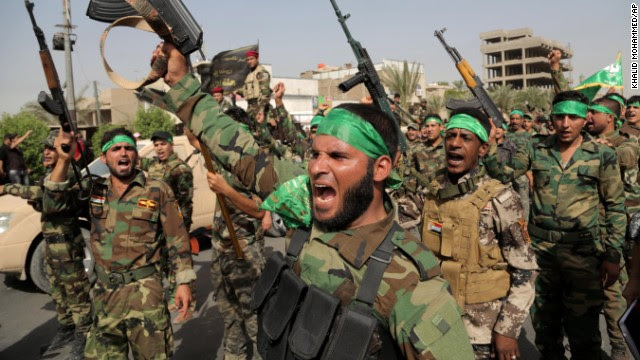 What will U.S. 'advisers' do in Iraq?
Refugee crisis
More than 1 million Iraqis have fled their homes this year because of conflict, the United Nations refugee agency said Friday. The number is likely to rise as Islamist militants and Iraqi security forces battle for control.
An estimated 800,000 people left Iraq's second-largest city of Mosul after it fell to fighters from ISIS, the International Committee of the Red Cross said. The city has a population of 1.6 million.
ISIS, born from an al Qaeda splinter group and supported by Sunni factions, continues its fierce advance in Iraq.
Al-Maliki's Shiite-dominated government is accused of fostering sectarian tensions by marginalizing Iraq's Sunni Arab and Kurd minorities.
U.S. President Barack Obama told CNN on Friday that U.S. military efforts are hopeless without a change in government.
"If we don't see Sunni, Shia and Kurd representation in the military command structure, if we don't see Sunni, Shia and Kurd political support for what we're doing, we won't do it," he said.
The complete interview will be aired Monday on CNN's "New Day."
The United States withdrew its final troops from Iraq in 2011, nearly nine years after leading the invasion that ousted longtime leader Saddam Hussein.
As ISIS advances toward Baghdad, a call for fighting volunteers is answered
More than 1 million Iraqis have fled their homes as ISIS continues armed siege
Obama: 'Won't be a military solution' if Iraqi political structure not fixed
CNN's Nic Robertson and Nima Elbagir contributed from Baghdad, and Arwa Damon from Irbil, Iraq. Mohammed Tawfeeq contributed from Atlanta. Michael Martinez wrote from Los Angeles.
From Around the Web

Posted by firesprinklers at 7:08 PM