U.S. warplanes and drone carry out 2nd round of attacks in Iraq


e U.S. military carried out a second round of air attacks on militants in northern Iraq on Friday, using an armed drone and four warplanes to bomb artillery positions and a vehicle convoy near the beleaguered city of Irbil, the Pentagon said.
A missile launched by a U.S. drone struck a mortar position outside the city in late afternoon local time, Rear Adm. John Kirby, the Pentagon spokesman, said in a statement.
When fighters with the militant Islamic State group returned to the site moments later, “the terrorists were attacked again and successfully eliminated,” Kirby said.
A little over an hour later, four F/A-18 fighter jets bombed a convoy of seven vehicles and a mortar position, he said.
U.S. aircraft conducted a strike against Sunni militants near Irbil on Friday, hours after President Obama authorized the use of force in northern Iraq.
“The aircraft executed two planned passes. On both runs, each aircraft dropped one laser-guided bomb, making a total of eight bombs dropped on target, neutralizing the mortar and convoy,” Kirby said.
The attacks followed a U.S. airstrike earlier in the day in which two F/A-18 fighters dropped 500-pound laser-guided bombs on a "mobile artillery piece" being used by the militants.
The Pentagon provided no details on how many militants were killed or wounded in the attacks.
It was the first major U.S. military action in the country since combat troops left three years ago.
Militants of the Islamic State have been advancing toward Irbil, the Kurdish regional capital where thousands of Iraqis have sought sanctuary from the breakaway Al Qaeda group.
lRelated 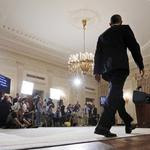 MIDDLE EAST
U.S. will use airstrikes to avert genocide in Iraq, Obama says

SEE ALL RELATED
8
The attacks occurred only hours after President Obama announced he had authorized airstrikes to protect about 100 U.S. military advisors in Irbil and to halt the advance of the Islamist militants.
At the White House, spokesman Josh Earnest would not provide a time frame for the bombing campaign, but he offered a “specific presidential commitment” that it would not be an extended period.
“The president is determined to make sure that the United States is not dragged back into a long military conflict in Iraq,” Earnest told reporters.
In addition to protecting U.S. personnel and assisting Iraqi religious refugees stranded on a mountaintop in northern Iraq, Earnest added a third justification for Obama’s decision to authorize limited airstrikes. The White House has been encouraged by Baghdad’s steps toward a more inclusive government, Earnest said, and believes that the U.S. attack on the Sunni insurgents supports that progress.
CAPTIONU.S. strikes militants
Lorelei Vander Griend/ US NAVY
Sailors guide an F/A-18C Hornet on the carrier George H.W. Bush in the Arabian Gulf. The Pentagon has confirmed that two F-18s dropped bombs on ISIS artillery positions near Erbil, Iraq.
CAPTIONPresident Obama
Charles Dharapak / Associated Press
President Obama leaves the podium after speaking about the situation in Iraq in the State Dining Room at the White House. Obama says he's authorized the U.S. military to carry out airstrikes in Iraq against Islamic militants if they advance toward the city of Erbil.
CAPTIONKirkuk
Uncredited / Associated Press
Iraqis inspect the site of a double car bomb attack that took place in Kirkuk, 180 miles north of Baghdad. A back-to-back car bomb attack took place near a Shiite Hussainia religious building that has been turned into a shelter for displaced Shiites, killing and wounding scores of people,...
CAPTIONChristians in Iraq
Khalid Mohammed / Associated Press
Displaced Christians settle at St. Joseph Church in Irbil, northern Iraq.
CAPTIONIraq
STR / EPA
Kurdish soldiers and Shiite volunteers take position on Thursday during fighting with Islamic State fighters in Amerly, north of Baghdad. The Islamic State is making fresh territorial gains.
“It is, after all, in the clear national security interests of the United States for there to be a stable Iraqi government that can preside over a stable Iraq and a security force that has the necessary capability to address the security situation in that country,” Earnest said.
Kirby said the Islamic State "was using this artillery to shell Kurdish forces defending Irbil, where U.S. personnel are located."
"As the president made clear, the United States military will continue to take direct action against ISIL when they threaten our personnel and facilities," Kirby said, referring to the militant group by an acronym for another of its names, the Islamic State in Iraq and the Levant.
He did not say if the artillery had been destroyed and said it wasn’t clear if militants had been killed in the strike.
cComments ADD A COMMENTSEE ALL COMMENTS
151
The Islamic State is a radical Sunni armed force that has seized control of large swaths of Syria and northern and western Iraq. Its forces took control of Mosul, Iraq's second-largest city, earlier this summer and have advanced in recent days toward the autonomous region controlled by the Kurds in the mountainous area northwest of Mosul.
Obama announced late Thursday that he had authorized airstrikes to defend U.S. personnel in Irbil. He also authorized strikes and humanitarian aid drops to assist thousands of displaced Iraqis in the area of Mt. Sinjar, in northern Iraq.
The refugees, mostly members of the Yazidi religious minority, have fled the advancing Islamic State fighters. Many face the risk of imminent starvation on the barren mountain slopes, Obama said.
Interactive
Islamic State in Iraq and Syria
Raoul Rañoa
Speaking in New Delhi, before the bombing had begun, Defense Secretary Chuck Hagel said intelligence and ground reports indicated that 60 of the 72 crates of food and water that U.S. military planes airdropped onto Mt. Sinjar early Friday morning had reached Iraqi refugees trapped there.
Hagel said so far, the Iraqis have not requested additional humanitarian aid.
“If they feel we can do more, and they want us to do more, then we’ll consider all those requests,” he said.
Hagel added that the Islamic State fighters “are well organized, and they’re armed, and they are a significant threat to the stability of Iraq.” But he expressed confidence that U.S. air power would deter them from attacking Americans at the U.S. Consulate in Irbil or at the U.S. Embassy in the Green Zone in Baghdad.
“It’s pretty clear who they are,” he said. “And they would be pretty identifiable where our airstrikes could be effective.”
In Irbil, Christian and Yazidi refugees were crowded into churches and camped out at construction sites on Friday.
"We need help," said Acaan Mansour, a 33-year-old mother from the town of Qaraqosh, a major Christian center outside Mosul. "We no longer have homes. ... People are sleeping in the open. We have lost everything."
Mansour was sheltering at St. Joseph's Church in Irbil, which has been turned into a refugee camp. In the church yard, people were sleeping on mats and blankets spread out under the trees.
Times staff writers Hennessey and Cloud reported from Washington and McDonnell reported from Irbil.
For more news on the conflict in Iraq, follow @mcdneville, @khennesseyand @DavidCloudLAT on Twitter


Posted by firesprinklers at 4:11 PM