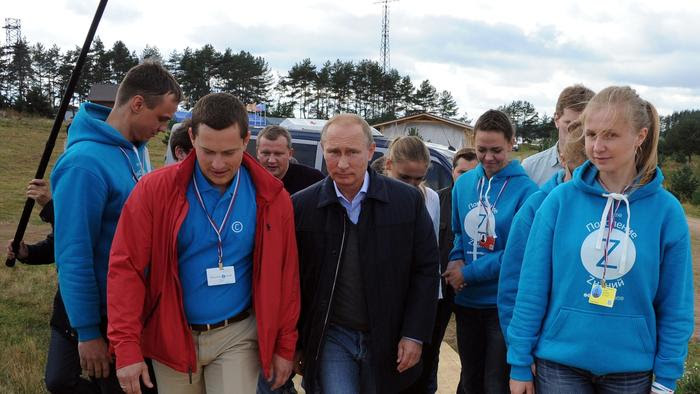 
Evoking startling images of siege and empire, Russian President Vladimir Putin on Friday struck a defiant pose over the deployment of troops and tanks in eastern Ukraine, declaring that Russia has no plans for “large-scale conflicts” but reminding the world that he presides over a nuclear-armed state.
“It's best not to mess with us,” Putin said, referring to Russian separatist fighters in Ukraine with a term that dates back to the era of the Russian empire — “New Russia militia” — and likening their battle with Ukrainian army forces to Soviet citizens' heroic resistance during the German Nazi siege of Leningrad.
His comments, designed to cast the Ukraine conflict as a World War II-like aggression inspired by the West, came a day after President Obama warned of the mounting costs to Russians as their government deepens its involvement in eastern Ukraine.

A local resident on Friday passes by a camouflaged tank in the eastern Ukraine town of Novoazovsk, which was captured by pro-Russia separatists this week after an infusion of Russian troops and armor into the region. (Sergei Grits / Associated Press)
The Obama administration's new appeal to Russian public opinion probably reflects growing doubt that the U.S. can bring Putin to the negotiating table over Ukraine, as the Kremlin leader wages his own campaign designed to stoke Russians' nationalist pride and nostalgia for its the lost superpower status.
“Thank God, I think no one is thinking of unleashing a large-scale conflict with Russia. I want to remind you that Russia is one of the leading nuclear powers,” Putin said during a visit to a Kremlin-sponsored youth camp, clearly aiming to marshal public support for a military campaign that has brought international isolation and increasingly stringent economic sanctions.
Obama on Thursday warned that stricter sanctions would be forthcoming after NATO released satellite surveillance images showing Russian armored columns crossing into southeastern Ukraine. 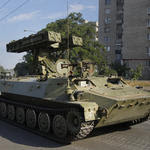 And the U.S. ambassador to the United Nations, Samantha Power, called up images of the human cost likely to be borne by the Russian military south of its borders. “In Russia, family members of Russian soldiers are holding funerals for their loved ones who have been killed in the fighting in Ukraine,” she told the U.N. Security Council on Thursday.
The U.S. is playing on growing Russian fear that the March annexation of Ukraine's Crimea region, which boosted Putin's approval ratings to record heights, could lead to a bloody and lengthy war.
The U.N. on Friday reported that the death toll in Ukraine as of Wednesday had risen to at least 2,593 since fighting between separatists and government troops escalated in mid-April. The report from the Office of the High Commissioner for Human Rights blamed all parties in the conflict for inflicting “intolerable hardships” on civilians, who are being killed at a rate of 36 a day.

Oleksandr Ratushniak / AFP/Getty Images
A Ukrainian soldier walks past a trench on the front line near Luhansk during a round of shelling on Aug. 26.

Sergei Supinksy / AFP/Getty Images
The child of a special Ukrainian volunteer battalion member holds her father during an oath-taking and farewell ceremony in Kiev in Aug. 26. The battalion was dispatched to take part in the conflict in the eastern part of the country.

Dimitar Dilkoff / AFP/Getty Images
Patients sit in a hospital basement after a shelling in the Ukrainian separatist stronghold of Donetsk on Aug. 24.

Yuriy Kirnichny / AFP/Getty Images
Ukrainian President Petro Poroshenko raises his fist in front of the audience during am Aug. 24 military parade in Kiev marking the 23rd anniversary of Ukraine's independence.

Max Vetrov / AFP/Getty Images
A tank with a flag of Novorossia (the union of the self-proclaimed Donetsk People's Republic and Luhansk People's Republic) drives in central Donetsk, Ukraine, on Aug. 23.
State Department officials said this week that the Russian military was sending troops 30 miles into Ukraine, while concealing that fact from them and their families. Also undisclosed, officials said, was the presence in St. Petersburg hospitals of soldiers wounded in Ukraine.
Steven Pifer, a former U.S. ambassador to Ukraine, noted a report in a Russian newspaper that authorities had gone so far as to move the graves of two Russian paratroopers killed in Ukraine to conceal their deaths from the public.
Reporters for several independent news sites in Russia said they ran into trouble while checking relatives' reports that paratroopers who had been killed in fighting near Luhansk had been buried secretly near Pskov. The reporters said they were chased away by beefy men who appeared to be with the security services.
If casualties do begin to accumulate, “that could undermine the entire basis of public support for what Putin's doing,” said Pifer, who is now with the Brookings Institution.


cComments
ADD A COMMENTSEE ALL COMMENTS
192

But the costs to Russian society for backing the separatists aren't yet apparent to most Russians, who have applauded the Kremlin's annexation of Crimea and its defense of Russians' rights in former Soviet republics that are now sovereign states.
U.S. reliance on sanctions as a tool for stirring public opposition to Putin's Ukraine policies has so far helped the Kremlin cast Washington as the perpetrators of any economic damage the country is suffering.
Though some polls show that many Russians — 90% in one survey — oppose a war in Ukraine, there are significant signs of continuing public hostility toward Western influence in the neighboring nation.
Washington's Pew Research Center said an early August survey by the Moscow-based Levada Center found that 77% of respondents in Russia believed the Ukrainian government's military operation to recover territory from the separatists was launched at the encouragement of the United States.


It sadly reminds me of the events of the Second World War, when German fascist ... occupiers surrounded our cities.- Russian President Vladimir Putin

As many as 52% believed that Ukraine had “become a puppet in the hands of the West and the U.S.A., who are pursuing an anti-Russia policy,” the poll found in a question that asked respondents to evaluate why the new leadership in Ukraine preferred to ally with the European Union over a Kremlin-controlled trade group.
“The story that comes through to you if you're the average Russian is that it's the Americans egging on this Ukrainian Nazi junta to attack peaceful civilians in eastern Ukraine,” said Olga Oliker, associate director of Rand Corp.'s International Security and Defense Policy Center.
In the Kremlin view, Russia is a brave force willing to stand up to the West to protect Russian speakers in eastern Ukraine from repression and to withstand the unjust sanctions imposed on it for its noble actions, Oliker said.
Putin clearly sought to reinforce that narrative Friday as state television cameras captured his choreographed exchange with the young campers.
“Small villages and large cities are surrounded by the Ukrainian army, which is directly hitting residential areas with the aim of destroying the infrastructure,” he said. “It sadly reminds me of the events of the Second World War, when German fascist ... occupiers surrounded our cities.”
EU foreign ministers meeting Friday in Milan debated calls for stepping up economic sanctions on Moscow, which to date have targeted a few dozen Kremlin officials and tightened Russia's access to international financial institutions.
“We have to be aware of what we are facing: We are now in the midst of a second Russian invasion of Ukraine within a year,” said Swedish Foreign Minister Carl Bildt, referring to Russia's seizure of Crimea. Citing the Russian forces' opening of a new front along Ukraine's Sea of Azov this week, Bildt said Russia's hand in the Ukraine violence was indisputable and that it was time “to call a spade a spade.”
European Commission President Jose Manuel Barroso called Putin on Friday to condemn the “significant incursions into and operations on Ukrainian soil by Russian military units” and warned that further intrusions would “carry high costs,” his office reported.
But there is division among the 28 EU member states on the extent to which sanctions can succeed in changing Russia's behavior, and resistance on the part of those heavily dependent on energy supplies from Russia. The EU diplomats were to discuss tightening sanctions at a meeting Saturday in Brussels, but they disclosed no specifics of which additional economic sectors might be targetedcarol.williams@latimes.com
Special correspondent Gorst reported from Moscow and Times staff writers Williams from Los Angeles and Richter from Washington.

Posted by firesprinklers at 1:13 AM