STORY HIGHLIGHTS
Mariupol, Ukraine (CNN) -- The Ukrainian military worked to fortify the port city of Mariupol after Russian intelligence groups were observed there, Col. Andriy Lysenko, spokesman for the Ukrainian National Defense and Security Council, said Saturday.
A CNN team saw Ukrainian forces strengthening defensive positions on the eastern outskirts of the city, reinforcing checkpoints and digging trenches along roads leading toward the Russian border.
Beyond these checkpoints, the team found a small advance detachment of Ukrainian troops on the main road about halfway between Mariupol and Novoazovsk. The soldiers said it had been quiet Saturday.
Nevertheless, tension between Ukraine and Russia dominated discussions by world leaders following Russian President Vladimir Putin's pointed statement on Friday: "I want to remind you that Russia is one of the most powerful nuclear nations. This is a reality, not just words."
Russia's actions in eastern Ukraine -- including what Western officials say is the incursion of hundreds of Russian troops as the Ukrainian military battles pro-Russian rebels -- could lead to a "point of no return" if a political solution isn't found, the European Commission's president said Saturday.

Why did Ukrainian forces leave border? 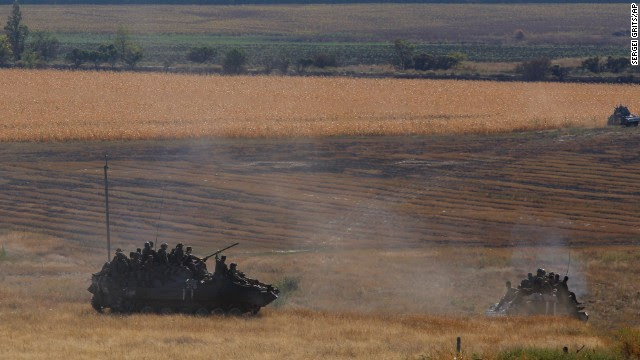 Russia denies invasion of Ukraine
"Come back tomorrow"
Back on the ground in eastern Ukraine, the CNN team encountered the first pro-Russian rebel roadblock a short distance outside Novoazovsk, about 12 miles (20 kilometers) from the Russian border, with concrete blocks across the road and a heavy machine gun among the weaponry.
A 12.7 mm heavy machine gun was among the weapons at the roadblock. The fighters would not allow the CNN team to pass through but said they should "come back tomorrow."
There is a large stretch of territory east of Mariupol, some 15-30 kilometers wide depending on location, that is occupied by neither Ukrainian forces nor pro-Russian fighters.
In the villages between the two "front lines" there are no signs of damage. Some stores are open and there is some civilian traffic on the roads. Long queues have formed at one checkpoint out of Mariupol as people from rural areas try to get in and out of the city.
"Escalation of conflict"
The situation "has worsened considerably," European Commission President Jose Manuel Barroso said in a joint press conference with Ukrainian President Petro Poroshenko in Brussels, where European leaders were meeting to discuss possible new sanctions against Moscow.
"We may see a situation where we reach the point of no return," Barroso said. "If the escalation of the conflict continues, this point of no return can come."
However, Putin appeared defiant Friday in the face of a chorus of Western condemnation over what NATO says is clear evidence of Russian military aggression in Ukraine.
Moscow doesn't want or intend to wade into any "large-scale conflicts," Putin said at a youth forum, state-run Itar-Tass reported. A few breaths later, he made the point that Russia is "strengthening our nuclear deterrence forces and our armed forces," making them more efficient and modernized.
"I want to remind you that Russia is one of the most powerful nuclear nations," the President said. "This is a reality, not just words."
'New Russian aggression'
The EU leaders meeting in Brussels may decide what action to take as soon as Saturday evening, EU foreign policy chief Catherine Ashton said, speaking after an informal meeting of foreign ministers in Milan, Italy.

Judah: 'Putin created a monster'
German Chancellor Angela Merkel and U.S. President Barack Obama agreed in a phone call Thursday that they would have to consider tougher action against Russia.
The European Union and the United States have already slapped economic sanctions on targeted Russian individuals and businesses. The union also has sanctioned certain sectors of the Russian economy, prompting Russia to retaliate with its own measures.
Russia has repeatedly denied either supporting the rebels, or sending its own troops over the border. But its assertions have been roundly rejected by the West.
Denials 'without credibility'
Russia annexed Ukraine's Crimean peninsula in March, following the ouster of pro-Moscow President Viktor Yanukovych the previous month.
Violence broke out in the eastern Donetsk and Luhansk regions in April, as separatist leaders declared independence from the government in Kiev. Since mid-April, the conflict between the pro-Russia rebels and the Ukrainian military has cost more than 2,500 lives, according to the United Nations.
White House spokesman Josh Earnest said Friday that -- whatever the Kremlin says -- the reality is Russian troops are inside Ukraine and have fired on Ukrainian military positions.
See the NATO satellite images
In response, Foreign Minister Sergey Lavrov said NATO had previously used "images from computer games" to -- in his view -- falsely make the case that Russian troops are in Ukraine, and said the "latest accusations are pretty similar."