31 arrested in Ferguson unrest, some from CA and NY, officer says


As another night of peaceful protests over the police killing of an unarmed black man devolved into confrontation and confusion, the Missouri State Highway Patrol officer in charge of law enforcement in this St. Louis suburb said 31 people had been arrested as of 2 a.m. Tuesday, some from as far away as California and New York.
The arrests underscore that outsiders are making trouble during the demonstrations that have followed the Aug. 9 shooting of Michael Brown, 18, by a Ferguson police officer, Capt. Ron Johnson said at a news briefing.
At one point, he said, "Our officers came under heavy gunfire” but did not fire a single bullet.
“This was not an act of protesters. This was an act of violent criminals,” he said.

Jeff Roberson / Assoicated Press
Tear gas billows during protests in Ferguson, Mo.
Monday night's vandalism included two fires, he said  -- one at a business, the other at an unoccupied residence. At least two people were shot, he said; he did not know their conditions. Officers used an armored vehicle to rescue one of the gunshot victims.
The trouble began about 9:40 p.m., he said, when 200 "loud but not aggressive protesters" converged at the corner of Ferguson and West Florissant avenues and faced a line of police in riot gear.
"Police did not react," Johnson said. "That's when bottles were thrown from the middle and the edge" of the crowd.
"These criminal acts came from a tiny minority of troublemakers," he said.
Johnson displayed two guns and a Molotov cocktail that he said officers had seized from instigators of the night's violence.
“Protesters are peaceful and respectful. They don’t clash with police. They don’t throw Molotov cocktails,” he said. 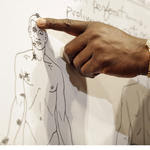 Johnson urged protesters to come out only in the daylight so that provocateurs could not hide behind peaceful crowds.
At times, Johnson grew emotional as he defended the actions of law enforcement officers, raising his voice as he described the chaos around them. "We just had officers in the midst of gunfire," he said.
He vowed to restore calm.
"This nation is watching each and every one of us," he said. "We're going to solve this ... We're going to make this neighborhood whole. We're going to make this community whole."
As if to get a little help from a higher power, Johnson had a chaplain open the news briefing with a prayer for peace.
Hours earlier, Johnson told CNN that attacks on police had prompted the decision to fire tear gas and begin arresting those who defied orders to disperse.


Related story: Turmoil in Ferguson, Mo., intensifies: What you need to know

Lauren Raab
“There becomes a balance on how long do we wait and if we wait too long …we do not have an opportunity to address that issue. So it becomes a balance.”
“That was not part of our plan,” he said of the decision to use force to try to scatter the protesters.
Johnson was brought in after a massive, militarized police response in the early days after Brown's killing backfired and enraged the protesters.
He said he still favors a more peaceful approach but would not shrink from other tactics as needed.
“I know that we still have that approach, we truly do, and for the most part it still works,” he told CNN. But some in the crowd “have decided they are not going to be a part of peaceful protest.”
Johnson noted that as the ranking officer he was buffeted between protesters angry about a police presence on the streets, and business owners upset that when he first became the commander he had ordered police not to respond to looters lest the violence escalate.


cComments
ADD A COMMENTSEE ALL COMMENTS
97

“Can we have it both ways?” he asked. “No.”
As he and other law enforcement and community leaders have throughout the crisis, he implored Ferguson’s residents -- whom he termed “people who come in peace” -- to leave the protest areas by 4 p.m., well before most of the nightly protests have escalated.
“This has to stop. It has to stop,” he said on CNN. “ I don’t want anyone to get hurt…We have to find a way to stop it.”
But how exactly that would happen was left unspoken.
Anthony Bell, a ward committeeman in St. Louis, was among those trying to keep the peace on the streets. These protests just have to play out, he told the Los Angeles Times. "It's releasing frustrations. We've got to let them vent."

CAPTIONNational Guard Called to Ferguson
But as the first sounds and flashes of tear gas rocked the far end of West Florissant Avenue, Bell conceded the nightly standoffs could go on for a long time.
"To get them to go home is going to be difficult," he said of the young men comprising most of the protesters. "The young people who come into the world nowadays, they have minds of their own."
For some time during the tense evening, police lined up hip-to-hip across one of the main roads in the protest area. Some officers leveled weapons in the direction of the demonstrators who had defied bullhorn orders to leave.
Alexis Tucker, 19, of Ferguson, a sophomore at Howard University, watched from the parking lot of a Family Dollar store on West Florissant as protesters lobbed a couple bottles and as police barked commands and, at times, pointed their guns and nightsticks.
"It's horrible," she said, "It's not representative of Ferguson, of fighting for justice."
The dynamic that has marked the protests since Brown's death at the hands of a Ferguson police officer persisted: A massive police presence, community leaders trying to convince protesters to leave, a small band of persistent agitators and a substantial media presence recording it all.
Pastor Charles Ewing was among several clergymen who came to the protest site Monday to urge a peaceful night. "These young people are hurting. They're frustrated," he told The Times.
Speaking of the violence that has erupted, Bishop Edwin C. Bass told The Times that it was "symptomatic of a greater disease. "
Bass cited poor job prospects, lack of access to quality education, and what he said was St Louis' segregated neighborhoods that made it easy for races not to mix.
"If you don't have access to other races, it's easy to dehumanize them," he said, "and that's how these kinds of things happen."
Follow @tinasusman, @mollyhf and @cathleendecker for more national news
Copyright © 2014, Los Angeles Times

Posted by firesprinklers at 7:41 AM