NOUR MALAS and
ALI A. NABHAN in Baghdad and 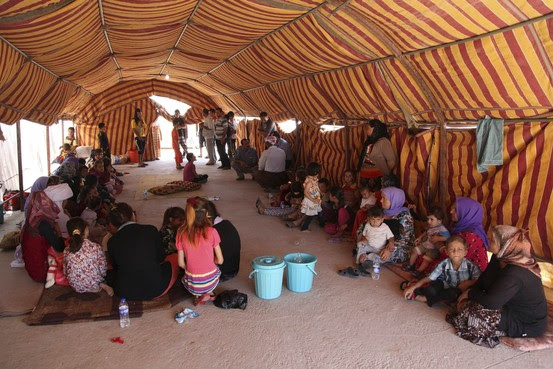 Displaced people from the minority Yazidi sect take refuge after fleeing the violence in the Iraqi town of Sinjar. Reuters

The U.S. military will drop emergency aid into Iraq on Thursday night to aid members of the Yazidi religious minority besieged on a northern mountainside by Sunni extremists, according to U.S. officials who said Washington is also considering airstrikes.
The Sunni militant group Islamic State is also imperiling other parts of northern Iraq in a rapid new advance that is also threatening the long-stable city of Erbil, the seat of the Kurdish regional government.
Tens of thousands of Iraqi Christians fled an advance by the insurgents into the country's Christian heartland in the north. It appears to be a strategic push by Islamic State toward the semiautonomous Kurdish region, so far insulated from the militant takeover of parts of Iraq and a haven for displaced from all over the country.
The march on the Christian area and the crisis involving the Yazidis are both in the same northern province, Nineveh. Islamic State has also taken over the Mosul Dam, the country's largest, according to a local resident.
On Sunday, the militants took over Sinjar, a Kurdish-controlled town with a large population of Yazidis, a Kurdish-speaking group that follow a pre-Islamic religion.
U.N. groups have estimated as many as 40,000 Yazidis have fled to the mountains without food or water and are trapped there, with all access roads out controlled by Islamic State. The United Nations Children's Fund cited reports that say as many as 40 refugee children have died.
The advancing militants killed some of the Yazidis who remained in the area know as the Sinjar plains, according to locals who fled and U.S. officials.
"They are unable to access food and water," said White House press secretary Josh Earnest. "They don't have any access to shelter. They have fled persecution, and efforts to leave the mountain are blocked by ISIL (Islamic State) forces who are threatening to kill them. This is a terrible humanitarian situation." 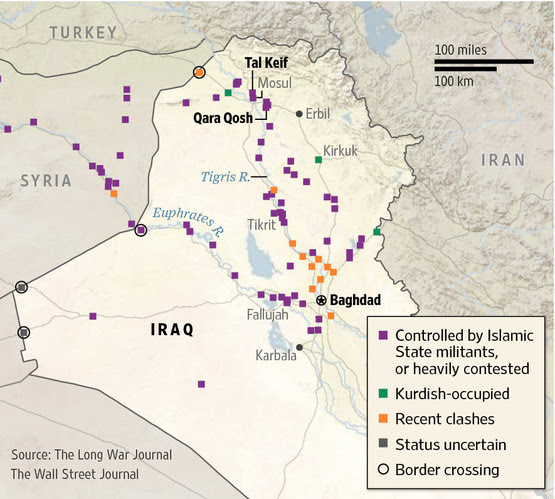 The U.N. Security Council scheduled an urgent meeting on Thursday about the crisis in Iraq.
The stranded Yazidis are the last surviving community in their ancestral homeland of the Yazidis, long misunderstood by the outside world as "devil-worshippers." The assault on the community is part of a pattern by extremists of stamping out non-Islamic religious observation. 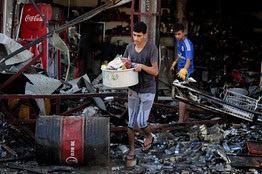 Posted by firesprinklers at 12:43 PM