STORY HIGHLIGHTS
(CNN) -- U.S. warplanes targeted ISIS fighters shelling Kurdish security checkpoints on Saturday, local officials told CNN, in what appears to be the second day of American airstrikes against the extremist Sunni militants in northern Iraq.
The ISIS fighters were near Makhmur, a town southwest of Irbil, and had been shelling Kurdish security checkpoints with artillery, the officials said.
The Pentagon declined to comment on the claims by Iraqi health and civil defense officials in Mosul, who told CNN the airstrikes killed at least 16 of the fighters.
News of the airstrikes came as President Barack Obama said the airstrikes in northern Iraq have successfully destroyed ISIS arms and equipment.
In televised remarks from the White House South Lawn, Obama said ultimately it will be up to Iraq to unite and stop the Islamic militant group -- and that will be a long-term struggle.
Obama declined to give a timetable for U.S. airstrikes and humanitarian air drops in Iraq, adding that Iraqi security forces need time to revamp, and Iraqi politicians need space to form a more inclusive government that could whittle support for the Sunni Islamic militants who have seized portions of the country. The group has also seized parts of Syria.
"I don't think we're going to solve this problem in weeks," President Barack Obama told reporters, while reiterating that no U.S. combat troops will join the fight. He spoke outside the White House before departing for a vacation on Massachusetts' Martha's Vineyard.
Obama's comments came a day after U.S. fighter jets and drones began bombing what officials described as ISIS artillery units and convoys advancing on the Kurdish regional capital of Irbil.

The importance of Kurdistan

U.S.: No plan for boots on ground in Iraq

U.N.: Kids dying from poor living situation
The airstrikes ramped up America's involvement in Iraq where ISIS, which calls itself the Islamic State, is seizing control of towns and key infrastructure in an advance that has forced hundreds of thousands to run for their lives. The group has celebrated its own slaughter along the way.
The governor of Irbil told CNN that ISIS may be as close as 30 kilometers (just over 18 miles) from the city of more than a million people.
American planes also have twice dropped food and other supplies to thousands of Yazidis, members of a minority group that fled to a northern Iraqi mountain after ISIS militants overran their town, Obama said Saturday.
U.S. aircraft are poised to strike ISIS militants who have surrounded the mountain, Obama said, adding that any such strikes would support Kurdish forces' efforts to free the Yazidis.
Obama had authorized "targeted airstrikes," saying in a televised address late Thursday that the United States had an obligation to protect its personnel in Iraq and prevent a potential genocide of minority groups by ISIS.
"Wherever and whenever (U.S.) personnel are facilities are threatened, it is my obligation ... to make sure they're protected," he said Saturday.
Obama: Iraq's ethnic groups need to unite
To secure their country, Iraqis will need to build an inclusive government, Obama said, in an apparent dig at the Shiite-dominated government led by Prime Minister Nuri al-Maliki. Western and Arab officials have said al-Maliki cut members of Iraq's Sunni minority out of the political process.
That marginalization coincided with months of deadly sectarian fighting throughout the country, and preceded ISIS' rout of the Shiite-dominated Iraqi security forces in Mosul, Iraq's second-largest city, earlier this year.
"In order to ensure that Sunni populations reject outright these kinds of incursions, they've got to feel like they're invested in a boarder national governments. And right now they don't feel that," Obama said.
After a reporter asked Obama if he felt ISIS had been underestimated, Obama said the advance of the Sunni Islamic extremists has been "more rapid" than intelligence officials and policymakers, both inside and outside Iraq, had predicted.
But he said ISIS' advance was made possible in part by the lack of an inclusive and functioning Iraqi government. This was illustrated, he said, by Iraqi security forces' capitulation to ISIS in Mosul.
The government forces, "when they (were) far away from Baghdad, did not have the incentive or the capacity to hold ground against an aggressive adversary," Obama said. "And so that's one more reason why" the formation of a functioning Iraqi government is so important, he said.
The United States has hundreds of military personnel in Iraq, including advisers sent in recent weeks to coordinate with Iraqi and Kurdish military officials in response to the ISIS rampage. The USS George H.W. Bush and other Navy ships also are in the region.
Obama hinted Saturday the United States' interests in targeting ISIS went beyond protecting U.S. personnel and minorities.
"My team has been vigilant ... about foreign fighters and jihadists gathering in Syria and now Iraq, who might potentially launch attacks outside of the region against Western targets and U.S. targets," he said. "So there's going to be a counterterrorism element that we are already preparing for and have been working diligently on for a long time now.
"There's going to be a military element in protecting our people."
Michael Rubin, a Middle East analyst with the conservative American Enterprise Institute, cautioned Saturday that even if al-Maliki's government would have been more inclusive, ISIS still would have been a problem.
"No matter how magnanimous Maliki could have been in an ideal world, it would have meant nothing to ISIS, many of whose members aren't even Iraqi. Sometimes there's no magic diplomatic formula," Rubin, a Pentagon official under former President George W. Bush, told CNN.
James Jeffrey, the U.S. ambassador to Iraq from 2010 to 2012, said one unanswered question is what the United States would do if the Iraqi government and moderate elements can't muster the political and military capability to take on ISIS in Iraq and Syria.
"Do we just learn to live with an al Qaeda state sworn to defeat us?" asked Jeffrey, a fellow at the Washington Institute for Near East Policy.
Hitting ISIS 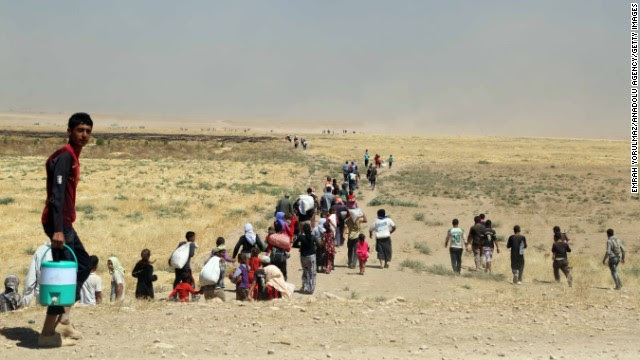 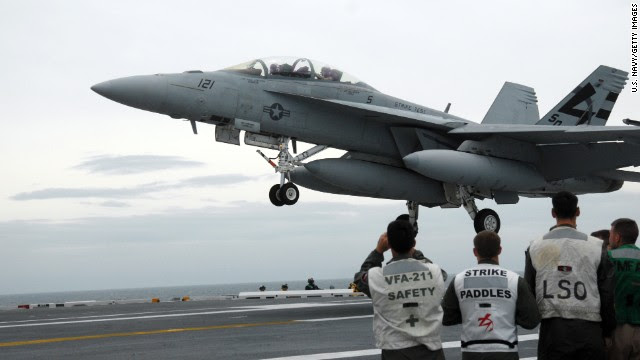 U.S. military's fighter fleet
Two U.S. F/A 18 fighters first struck an ISIS artillery unit outside of Irbil, dropping two 500-pound laser-guided bombs Friday, Pentagon spokesman Navy Rear Adm. John Kirby said.
Later, a drone targeted an ISIS mortar position, Kirby said. When ISIS fighters returned to the site a short time later, the drone struck the target again, he said.
That was followed a short time later by a second round of airstrikes, carried out by four U.S. fighter jets, which targeted an ISIS convoy of seven vehicles and another mortar position, Kirby said.
The F/A 18s made two passes, dropping a total of eight laser-guided bombs, he said.
Airstrikes are crucial because ISIS fighters are well-armed and are outgunning the Kurdish forces, thanks to the weapons the militants seized from the Iraqi military in Mosul, Irbil Gov. Nawzad Hadi said.
Map: Where is ISIS?
Helping the Yazidis
I don't think we're going to solve this problem in weeks.U.S. President Barack Obama
Before Obama announced the airstrikes, two U.S. military cargo planes dropped thousands of gallons of water and meals onto Mount Sinjar, where some Yazidi children had died from dehydration.
ISIS overran Sinjar last weekend, forcing tens of thousands of Yazidis to flee into surrounding mountains without food, water or shelter, and prompting concerns of a potential genocide. The Yazidis are of Kurdish descent, and their religion is considered a pre-Islamic sect that draws from Christianity, Judaism and Zoroastrianism.
"The thousands—perhaps tens of thousands—of Iraqi men, women and children who fled to that mountain were starving and dying of thirst," Obama said during his weekly radio address. "The food and water we airdropped will help them survive. I've also approved targeted American airstrikes to help Iraqi forces break the siege and rescue these families. Earlier this week, one anguished Iraqi in this area cried to the world, 'There is no one coming to help.' Today, America is helping."
Obama told reporters Saturday that he spoke with French President Francois Hollande and British Prime Minister David Cameron about the situation in Iraq, and that both have agreed to join the United States in providing humanitarian assistance to Iraqis endangered by ISIS.
Britain will contribute aid worth 8 million pounds ($13.4 million), and its air force will start air-dropping supplies in northern Iraq soon, particularly for the Yazidis trapped on the mountain, UK Foreign Secretary Philip Hammond said Saturday.
Militants using U.S.-made weapons
Even as the airstrikes were under way, there was news that ISIS militants captured Iraq's largest hydroelectric dam, just north of Mosul, Iraq's second-largest city. According to a senior Kurdish official, the militant fighters have been using U.S.-made weapons seized during fighting from the Iraqi army, including M1 Abrams tanks.
There had been conflicting reports about who controlled the dam on the Tigris River, with heavy fighting under way between ISIS fighters and Kurdish forces, known as Peshmerga. U.S. officials have warned that a failure of the dam would be catastrophic, resulting in flooding all the way to Baghdad.
In other fighting, an Iraqi airstrike killed 45 ISIS fighters and injured 60 Friday in the northern town of Sinjar, the country's state-run National Media Center said.
Beheadings

Report: ISIS captures Iraq's largest dam
ISIS militants have executed people who don't share their fanatical interpretation of Sunni Islam. The group posts videos of its savagery to the Internet.
One shows a Christian man forced to his knees, surrounded by masked militants, identified in the video as members of ISIS. They force the man at gunpoint to "convert" to Islam. Then, the group beheads him.

Another shows ISIS militants placing severed heads on spikes to strike terror in the population.
Posted by firesprinklers at 1:14 PM