'Beyond Outraged' Family Of Michael Brown & Their Attorneys Release Statement 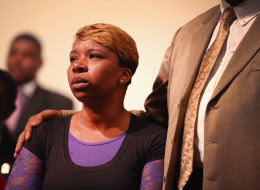 The family of Michael Brown, the unarmed black teen who was shot and killed by a police officer in Ferguson, Missouri last week, released a statement Friday.
The statement, from both the family and their lawyers, was tweeted out by attorney Ben Crump after police announced Darren Wilson as the officer who shot Brown, and named the teen as a suspect in a robbery that occurred before the shooting.
Read the full statement below:

Michael Brown’s family is beyond outraged at the devious way the police chief has chosen to disseminate piece mil information in a manner intended to assassinate the character of their son, following such a brutal assassination of his person in broad daylight.
There is nothing based on the facts that have been placed before us that can justify the execution style murder of their child by this police officer as he held his hands up, which is the universal sign of surrender.
The prolonged release of the officer’s name and then the subsequent alleged information regarding a robbery is the reason why the family and the local community have such distrust for the local law enforcement agencies.
It is no way transparent to release the still photographs alleged to be Michael Brown and refuse to release the photographs of the officer that executed him.
The police strategy of attempting to blame the victim will not divert our attention, from being focused on the autopsy, ballistics report and the trajectory of the bullets that caused Michael’s death and will demonstrate to the world this brutal execution of an unarmed teenager.
Benjamin L Crump, Esq.
Anthony D. Gray, Esq.
Daryl D. Parks, Esq.

Posted by firesprinklers at 11:51 AM