STORY HIGHLIGHTS
Have you documented the protests in Ferguson? Share your photos, videos and opinions with CNN iReport. For local coverage of the fatal police shooting of Michael Brown and its aftermath, go to CNN affiliates KMOV, KSDK, KTVI and KPLR.
Ferguson, Missouri (CNN) -- An evening of peaceful protests devolved into another tense confrontation in Ferguson on Monday night as a few protesters hurled bottles and rocks, and in some cases Molotov cocktails, at a heavy police presence -- and officers responded by firing stun grenades and tear gas canisters.
For almost two hours, police in riot gear and gas masks formed a barricade and stood watch. They used LRAD (Long Range Acoustic Device) crowd control systems to send out piercing and painful sounds to disperse the crowd.
As officers sat with guns pointed atop armored vehicles, others darted into the crowd to make an occasional arrest before retreating. 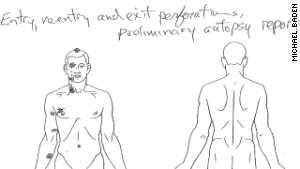 A diagram from the autopsy shows entry and exit wounds.

Atty.: He surrendered before 'kill shot'

Stunning images of unrest in Ferguson 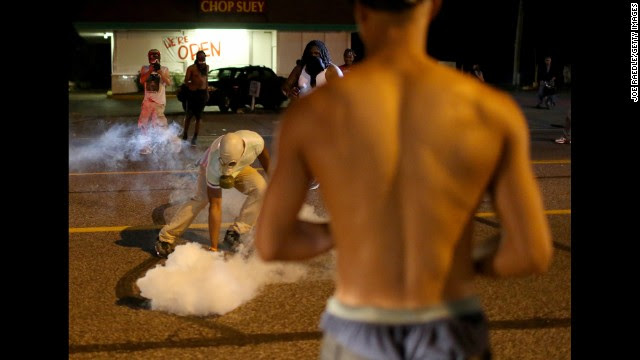 Witness: 'I knew this was not right'

Captain: 'This is my neighborhood'

Captain: 'We made seven arrests'

Who is pathologist Michael Baden?
Police told protesters they have to keep walking. If they stood still, they were warned, they risked arrest for unlawful assembly.
Most obliged, but not all.
One protester ripped out a "Do Not Enter" street sign and pointed it toward officers.
Then, things deteriorated rapidly.
Some reported shots being fired. A few Molotov cocktails were also thrown.
Police responded with tear gas and stun grenades.
Then, with guns drawn, they moved in toward the protesters to clear the area.
Officers told reporters it was for "public safety," and that there had been a gunshot victim. They didn't elaborate.
"At the end of this, we're gonna be classed as insurgents," an upset protester told CNN.
Trying to keep the peace
To be sure, the rowdy demonstrators were greatly outnumbered by fellow protesters trying to keep the gathering peaceful.
"Get out of the street! Don't fight!" some protesters bellowed on bullhorns.
Protester Jerrell Bourrage grabbed one of the bottle-hurling demonstrators and told him to stop.
"We don't need these antagonizers out here. We need people who can stand out here to the side and still let your word be known," Bourrage said.
"I came to keep my brothers safe. We have fathers, brothers, mothers and aunties out here."
Some believe those causing trouble are from outside Ferguson.
"We are not going to let outside provocateurs to come here. We can't allow this movement to be destroyed," said Malik Shabazz, national president of Black Lawyers for Justice. He wouldn't say who the men were.
CNN's Jake Tapper echoed the frustrations of many in the crowd.
"Absolutely there have been looters, absolutely over the last nine days there has been violence, but there is nothing going on in this street right now that merits this scene out of Bagram. Nothing.
"So if people wonder why the people of Ferguson, Missouri, are so upset, this is part of the reason. What is this? This doesn't make any sense."
Grand jury proceedings likely
Ferguson has seen nightly protests since Michael Brown, an unarmed black teenager, was shot to death by a white police officer 10 days ago.
The situation remains so unstable that the Ferguson-Florissant School District has canceled classes for the rest of the week, and the The Missouri National Guard has been called out by Gov. Jay Nixon.
As early as Wednesday, a grand jury may begin to hear testimony from witnesses and decide on whether to return an indictment in the case.
In addition to that proceeding, the Justice Department has opened a civil rights investigation into Brown's death.
"I realize there is tremendous interest in the facts of the incident that led to Michael Brown's death, but I ask for the public's patience as we conduct this investigation," Attorney General Eric Holder said.
"The selective release of sensitive information that we have seen in this case so far is troubling to me.
5 things to know about Michael Brown's shooting
Complete coverage of the Ferguson shooting


Posted by firesprinklers at 10:12 PM