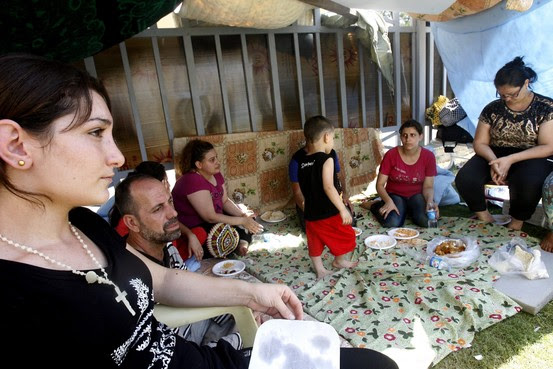 ERBIL, Iraq—President Barack Obama signaled the likelihood of an enduring U.S. military involvement in Iraq, but said airstrikes and other aid would only help contain the threat from Sunni extremists until the country's leaders form a new government to confront the crisis.
The latest offensive by the militant group Islamic State over the past week brought the fighters to within 25 miles of the capital of the semiautonomous Kurdish region, Erbil. The U.S. conducted three rounds of airstrikes on Friday aimed at halting further moves toward the city, where American military advisers and diplomats are stationed.
The group, also known as ISIS or ISIL, has captured large swaths of Iraqi territory since June. The insurgents tried to advance farther northward on Saturday, but then retreated.
President Obama gave an update on the airstrikes targeting Islamic State militants in northern Iraq, saying that the U.S. will provide military assistance while continuing to call on Iraq to form an inclusive government. Photo: AP
View Graphics 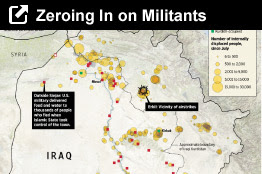 The Islamic State is accused of attempting to perpetrate a genocide against the Yazidi religious minority. On Saturday, the U.S. launched four airstrikes designed to defend Yazidis who were coming under attack from the Islamic extremists. Since President Obama authorized U.S. intervention on Thursday night, U.S. forces have airdropped three deliveries of food and water to tens of thousands of Yazidistrapped on a northern mountainside by the rapid advance of the militants.
The American president has pledged a strictly limited military involvement and insisted U.S. combat troops won't return to fight in Iraq. But he refused Saturday to set an end-date for the new military operations—the first since American troops withdrew from Iraq in 2011.
"I don't think we're going to solve this problem in weeks," Mr. Obama said in his first remarks to reporters since airstrikes were launched. "I think this is going to take some time" for Iraqi forces to mount an effective offensive against Islamic State.
Instead, the White House is pressing Iraqi leaders to form a more inclusive new government that can unite the country's disparate groups and more effectively counter the militants. Iraqi politicians are meeting this weekend against a constitutional deadline for forming a new government.
U.S. efforts would help "preserve a space for them to do the hard work that's necessary," Mr. Obama said, but added: "Ultimately, only Iraqis can ensure the security and stability of Iraq."
Asked whether the U.S. had underestimated Islamic State's strength, Mr. Obama said the group's advance had clearly been more rapid than expected by intelligence agencies and policy makers. But he blamed that on Iraqi forces' inability to hold firm when operating outside Baghdad.
"And so that's one more reason why Iraqi government formation is so important, because there has to be a rebuilding and an understanding of who it is that the Iraqi security forces are reporting to, what they are fighting for," he said.
The White House has blamed Iraq's current plight on Baghdad's leadership under Prime Minister Nouri al-Maliki, which has pursued exclusionary policies that have alienated the country's Sunni population and angered Sunni leaders of other countries in the region.
He called the formation of a new government "the most important timetable" in the crisis.
"In the absence of an Iraqi government, it is very hard to get a unified effort by Iraqis against ISIL. We can conduct airstrikes, but ultimately there is not going to be an American military solution to this problem."
The U.S. and its Iraqi allies are looking at a "long-term project" before Iraqi forces are properly trained, outfitted and ultimately welcome in all parts of the country, the president said.
"What we've seen over the last several months indicates the weaknesses in Iraqi government," he said. "But what we've also seen I think is a wake-up call for a lot of Iraqis inside Baghdad recognizing that we're going to have to rethink how we do business if we're going to hold our country together."
The U.S. airstrikes so far have targeted militant artillery, a group of fighters, and armed personnel carriers and vehicles.
In the early morning hours of Saturday, Islamic State fighters tried to advance northward and briefly seized the town of Sheikhan, moving closer to the Kurdish-controlled province of Dohuk. However, by the afternoon, the fighters pulled back from Sheikhan, said a local resident, who added that they remained on the outskirts of the town.
A Kurdistan Regional Government official said the town remains under the control of its military forces known as the Peshmerga.It wasn't immediately clear why the Islamic State insurgents retreated.
The militants appear to be trying to connect up the towns they have seized along the 650-mile border of Kurdish-controlled territory, an advance that has alarmed the Kurdistan Regional Government and panicked residents.
South of Erbil, in the city of Kirkuk, Kurdish forces significantly tightened security measures on Saturday, fearing a militant advance, according to a security official there. The move came after security forces repelled an insurgent attack on Touz Khurmato, a Shiite Turkmen town in Salaheddine province, southeast of Kirkuk. The town is about a 45 minute drive from Kirkuk city.
Town mayor Shalal Abdoul said dozens of militants attacked from two sides after striking the town with mortars. After clashes that lasted until dawn Saturday, Peshmerga fighters with Iraqi air support pushed the militants back, killing 37, the mayor said.
The fate of the Yazidis has stirred international outrage, and it is unclear how the more than 40,000 people can be reached when access points to the mountainside are controlled by Islamic State. The United Nations has said it is urgently studying options for a humanitarian corridor.
Since Thursday, in coordination with the Iraqi government, U.S. military aircraft have delivered more than 52,000 meals and more than 10,600 gallons of drinking water to the Yazidis, Central Command officials said in a statement.
On Friday, hundreds of those trapped in the Sinjar mountains were rescued in a complicated operation described by some of their families and one evacuee.
U.S. jet fighters hit Islamic State artillery positions in northern Iraq on Friday, the first of what is expected to be a series of American strikes meant to halt the Sunni extremist advance on the Kurdish capital of Erbil. (Photo: AP)
One part of the Sinjar mountain range borders Syrian Kurdish territory, where fighters from the Kurdish Democratic Union Party, or PYD, control the border. Those fighters helped pave a path into Syrian territory for the trapped Yazidis. Some who escaped stayed in Syria and others who managed to cross back into a sliver of safer Iraqi territory, according to family accounts.
The International Rescue Committee, an aid agency, said it was providing medical care for up to 4,000 Yazidi Iraqi refugees in al-Hasakeh province in Syria, many of them dehydrated after up to six days without access to food or water.
—Matt Bradley and Safa Majeed in Baghdad contributed to this article.


Write to Jeffrey Sparshott at jeffrey.sparshott@wsj.com and Nour Malas atnour.malas@wsj.com

Posted by firesprinklers at 9:50 PM