Upstate NY Prison Break and How It Compares to 'Shawshank Redemption'

By EMILY SHAPIRO and MEGHAN KENEALLY


It's been over 48 hours since two convicted murderers escaped from a maximum-security prison in upstate New York in a "Shawshank Redemption"-like fashion.
As the search for the convicted felons continues and more details about their elaborate escape plan emerge, how does the real-life prison break compare to the fictional 1994 film?
Call it real life versus reel life.
Female Prison Worker Questioned in Murderers' Escape
2 Convicted Murderers Escape From Maximum Security Prison in Upstate New York
Teen Runaways Caught After Alleged Crime Spree
THE SETTING
Film: "The Shawshank Redemption" is set at the fictional Shawshank State Penitentiary in rural Maine. The film begins in 1947 and spans several decades.
Real life: The morning of June 6, 2015, Richard Matt and David Sweat were reported missing from the Clinton Correctional Facility in Dannemora, New York, about 20 miles south of the Canadian border.
THE DUO
Film: In "The Shawshank Redemption," the protagonist, Andy, goes to prison after he is convicted of murdering his wife and her lover. He befriends another inmate, Red, who is serving a life sentence. 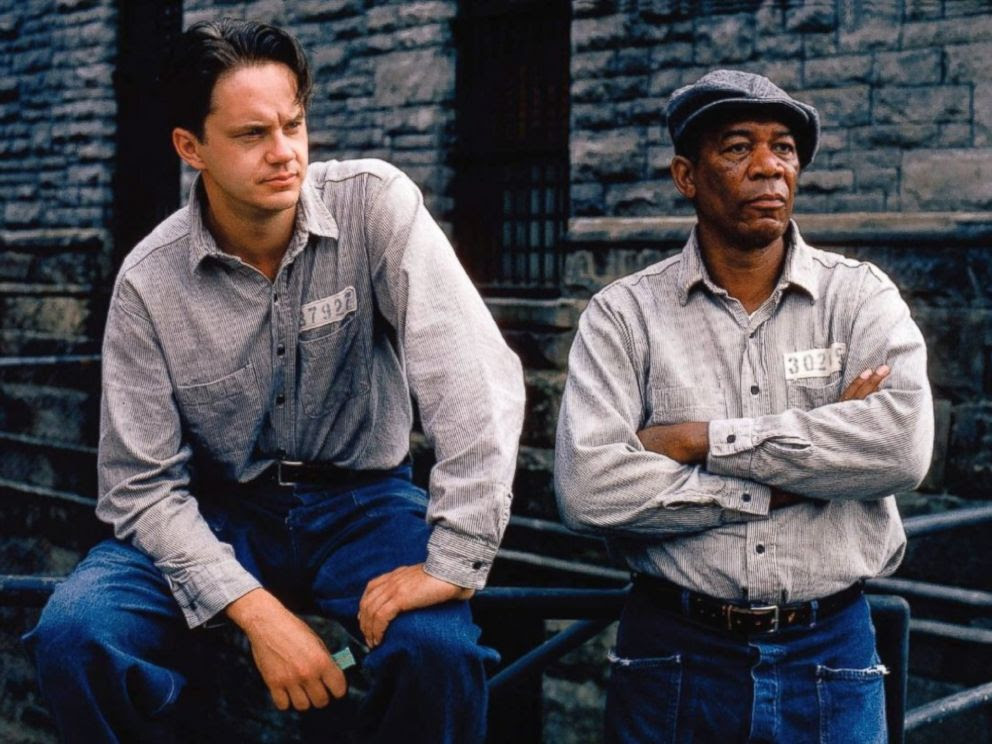 Castle Rock Entertainment
PHOTO: Still of Morgan Freeman and Tim Robbins in The Shawshank Redemption (1994)
Real life: Sweat, 34, was serving a life sentence after he was convicted of killing a Broome County, New York, sheriff's deputy in 2002. Sweat and another man were convicted of fatally shooting Deputy Kevin Tarsia, firing 15 rounds at him after the duo committed a burglary. 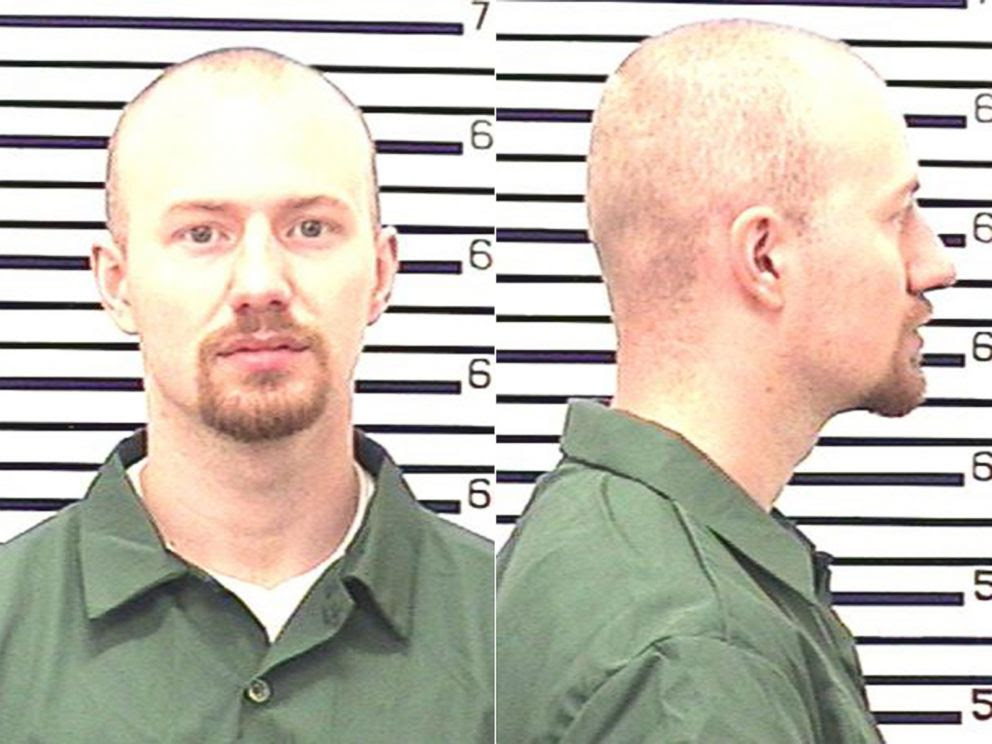 New York State Police
PHOTO: Undated photos released by the New York State Police show David Sweat who escaped from the Clinton Correctional Facility in Dannemora.
Matt, 48, was serving 25 years to life in prison after he kidnapped and beat a man to death in 1997.
But this wasn't Matt's first jail break. In 1986, while Matt was serving a one-year sentence for assault, he broke out of the Erie County jail, the Buffalo News reported. He was eventually caught and returned to prison, according to the New York Times.
In the 1990s, Matt then spent three years in prison for attempted burglary, the New York Times reported. He was released in 1997. But later that year, he was arrested for beating, torturing, killing and dismembering his former boss, William Rickerson.
Before his trial, Matt fled to Mexico, where he allegedly killed a man in a bar fight. He was later extradited to the U.S. and convicted of Rickerson's death. 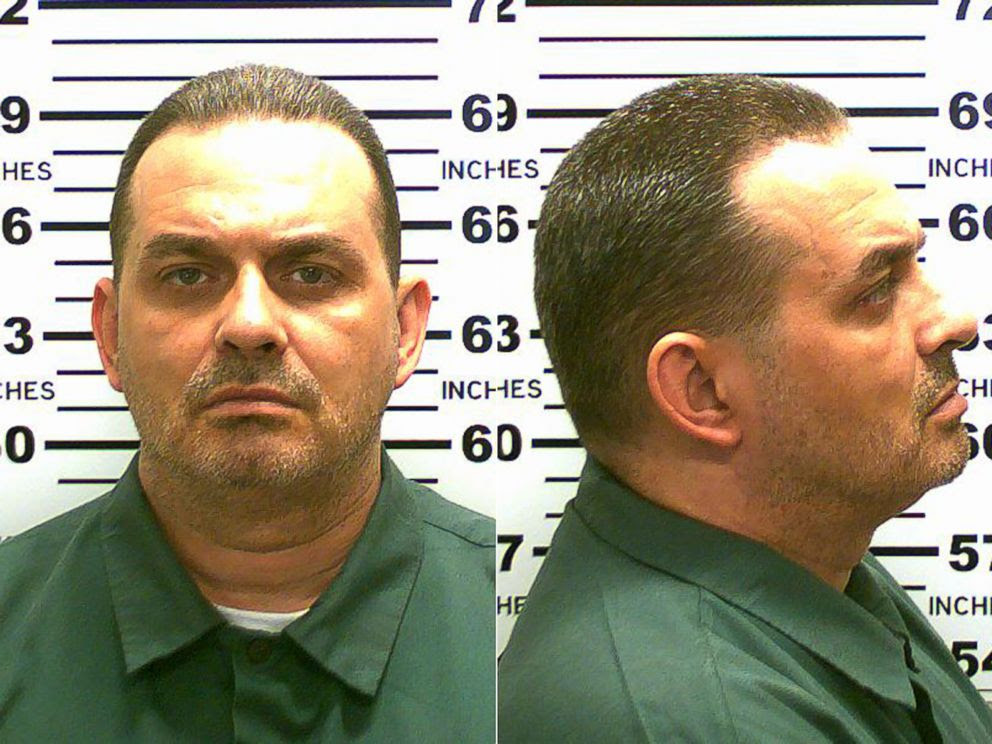 New York State Police
PHOTO: Undated photos released by the New York State Police show Richard Matt, who escaped from the Clinton Correctional Facility in Dannemora.
"These are killers. They are murderers," said New York Gov. Andrew Cuomo, who toured the prison Saturday. "There's never been a question about the crimes they committed."
THE COVER-UP
Film: Unlike the real-life escape, in the movie, Andy escapes from prison alone. When the warden goes to check his cell, he throws a rock at a poster on the wall during a tantrum and is shocked to see the rock tear right through it. The warden removes the poster and sees the tunnel Andy dug to escape.
Real life: Matt and Sweat, who were in separate but adjacent cells, arranged hoodies and other clothing to make it appear as if they were in their beds, officials said.
THE ROUTE
Film: Andy tunneled through the wall of his cell, broke a pipe, then climbed through a sewage tunnel, finally reaching the outside world.
Real life: Matt and Sweat escaped through holes in their cell walls, authorities said.
"They went onto a catwalk, which is about six stories high," said Anthony Annuci, the acting state corrections commissioner. "We estimate they climbed down ... and were able to get out to this facility through tunnels."
They then came out onto the street through a manhole cover, Annuci said. 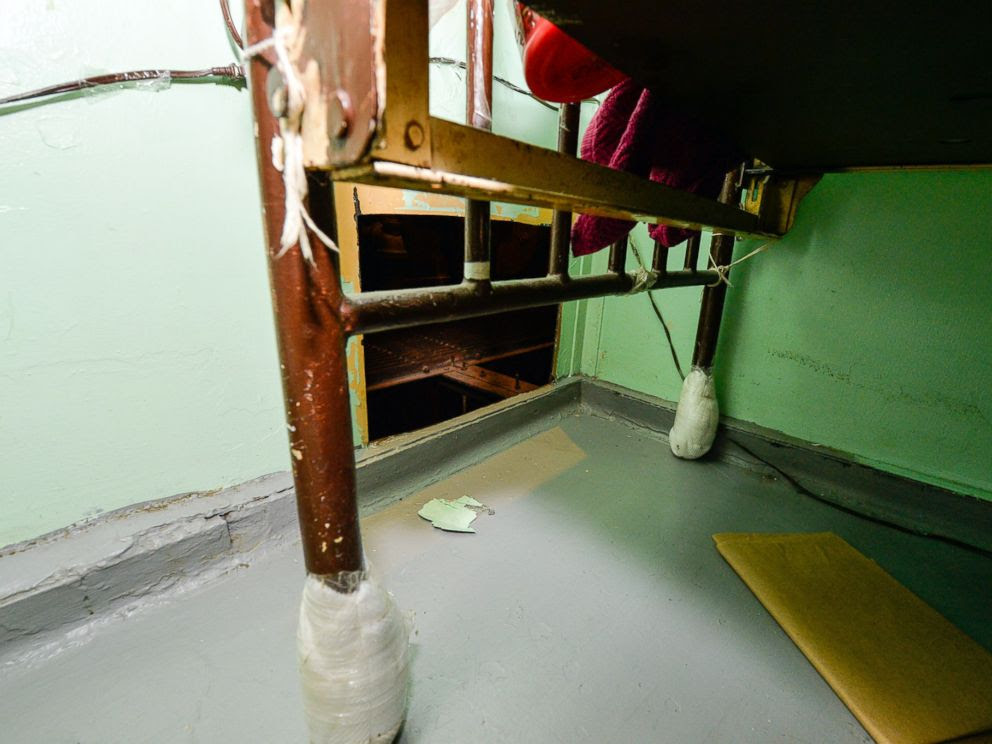 Darren McGee/New York State Governors Office, via AP
PHOTO: The area where two convicted murderers used power tools to cut through steel pipes at a maximum-security prison in Dannemora, NY, and escaped through a manhole, New York Gov. Andrew Cuomo said Saturday, June 6, 2015.
THE TOOLS
Film: For 17 years, Andy used a rock hammer to chip away at his wall and dig a tunnel.
Real life: Matt and Sweat appeared to have power tools in several spots to help dig their escape route, authorities said.
Cuomo told ABC News that there was no way the men could have used the tools in total secrecy.
"They had to be heard," Cuomo said.
THE NOTE
Film: Before Andy escaped, he left behind a Bible for the warden that had an outline of his rock hammer in it. He also left a note to the warden, saying: "Dear Warden, You were right. Salvation lay within."
Real life: Matt and Sweat left a note behind that read "have a nice day," Cuomo said, adding that he suspects it was their way of saying they were doing something that had never been done before. 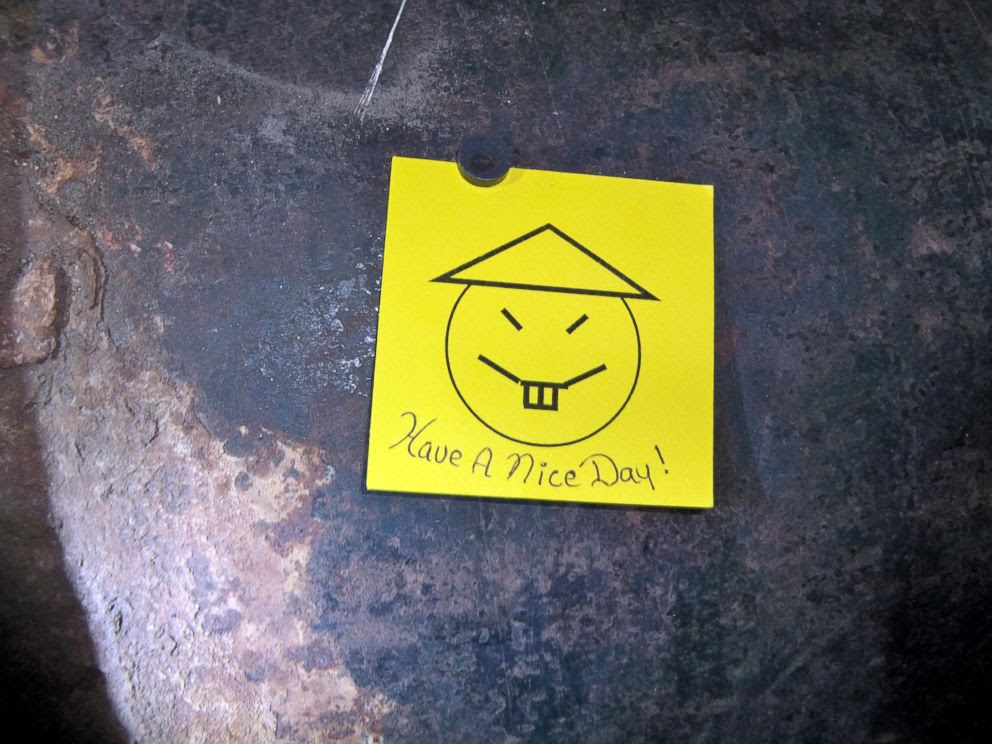 Darren McGee/New York State Governors Office, via AP
PHOTO: This photo provided by New York State Governor's office shows the note left by two convicted murderers who used power tools to cut through steel pipes at a maximum-security prison in Dannemora, NY, Gov. Andrew Cuomo said June 6, 2015.
"I'm sure they knew that since it was the first escape it was going to be a big deal," Cuomo said. "But we'll get them back and we'll give them the note back."
THE GETAWAY
Film: In "The Shawshank Redemption," Andy escapes to a small coastal town in Mexico. When Red finally gets released after serving 40 years in prison, he violates his parole and goes to Mexico to reunite with Andy.
Real life: More than 150 leads have been developed so far in the search for Matt and Sweat, Major Charles Guess of the New York State Police said Sunday. Authorities are searching in New York State, but have also expanded the investigation to Canada and Mexico.
Cuomo has urged anyone with information to come forward.
"This was the first breakout [at the prison's maximum security portion] since 1865 and I want to make sure that it's the last," Cuomo said.
New York State is offering a $100,000 reward for information leading to Matt and Sweat's apprehension and arrest. 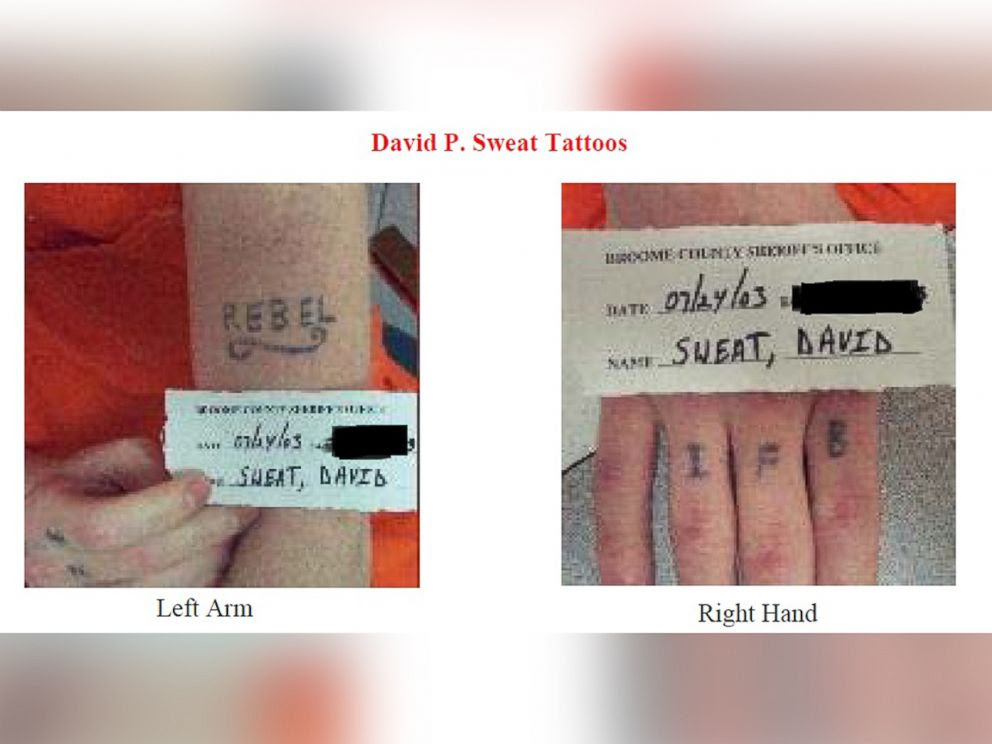 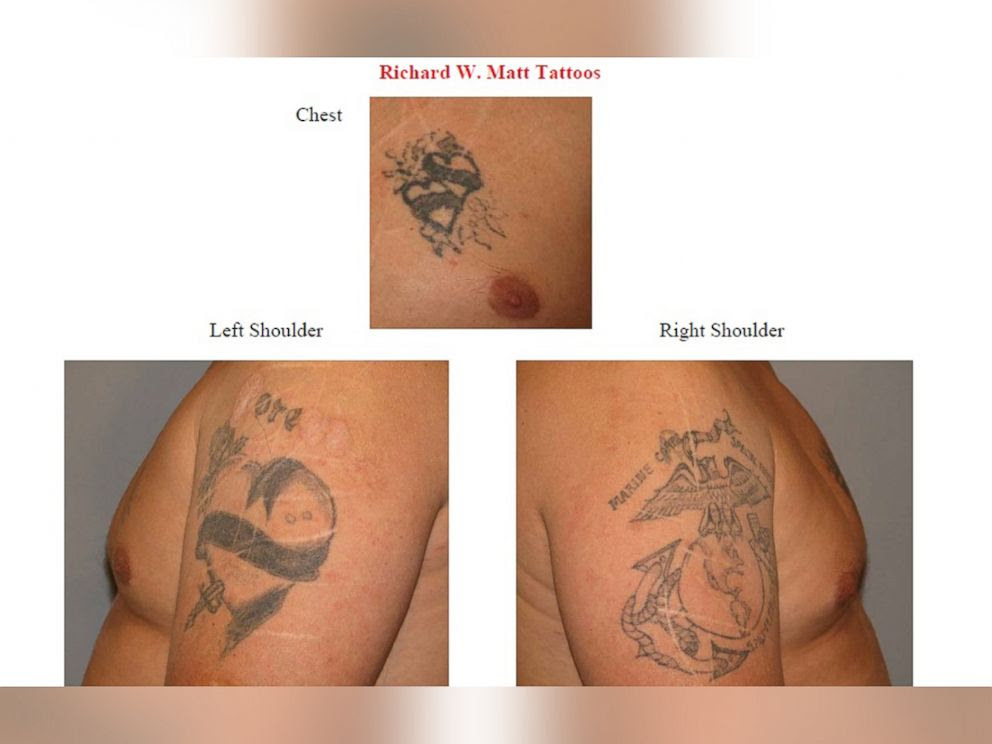 New York State Police
PHOTO: Undated photos released by the New York State Police show Richard Matt, who escaped from the Clinton Correctional Facility in Dannemora.
The Associated Press contributed to this report.
Posted by firesprinklers at 10:40 AM