Latest in N.Y. manhunt: 1 fugitive believed dead, 1 on the run

Richard Matt, one of the two convicted murderers who escaped from a New York State Prison, has been shot and killed by police. Video provided by Newsy Newslook 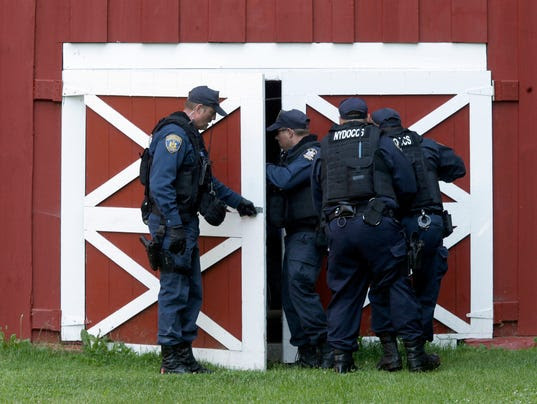 (Photo: Mary Altaffer, AP)
2494CONNECT 396TWEET 3LINKEDIN 99COMMENTEMAILMORE
On the 21st day of an intense manhunt for two escaped murderers, New York State Police said Friday that an officer had shot and killed a man believed to be Richard Matt in woods a few miles from the Canadian border.
A positive identification was pending, but law enforcement sources were reporting that the 49-year-old Matt was killed. He was serving a 25-years-to-life sentence for the 1997 kidnapping, torture and hacksaw dismemberment of his former boss when he escaped June 6 with his partner, David Sweat.
Authorities were pursuing Sweat and said they were closing in on him around Elephant's Head, near the southern tip of Lake Titus, in the Adirondack Mountains. He reportedly was involved in a gun battle with law enforcement early Friday evening, about three hours after Matt was shot.
The State Police said the man believed to be Matt was killed at about 3:45 p.m. after a "member of law enforcement" spotted him in a wooded area in the town of Malone, about 10 miles from the border and 30 miles from the prison. The State Policeannouncement did not say whether Matt was armed or had fired on the officer.
The Plattsburgh Press-Republican reported that he was shot just off Route 30, near a cabin where police said DNA evidence showed he had been Thursday. The New York Times, quoting two people knowledgeable about the situation, reported that Matt died in a burst of gunfire by law enforcement officers. The Times reported a second flurry of gunfire in the area several minutes after an initial volley.
The two men, aided by a prison worker and a guard, broke out of the Clinton Correctional Facility in Dannemora, N.Y. Sweat was serving a life sentence without parole for killing a sheriff's deputy. 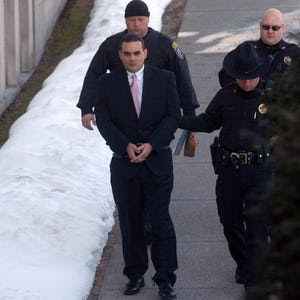 USA TODAY
Escaped convict Matt compared to Charles Manson
State police earlier Friday said new evidence found at a campsite and field had given them a "high degree of confidence" the two escaped killers were headed toward the Canadian border, traveling primarily at night.
Major Charles Guess, Troop B commander of the New York State Police, said evidence found Friday prompted officers to concentrate their search north and west of Malone, about 30 miles from the maximum-security prison.
Matt and Sweat escaped by cutting through a metal wall and some pipes and tunnels, then crawling from a manhole outside prison walls. It was the first escape in 150 years.

TWO MURDERERS ESCAPE UPSTATE N.Y. PRISONSearch area for escapees narrows to 75 square miles | 01:06
Searchers are focusing on an area around a seasonal cabin in Franklin County, New York where personal items believed to belong to the men were seized.
1 of 22

TWO MURDERERS ESCAPE UPSTATE N.Y. PRISONPrison guard arrested 'had no knowledge' of escape plan | 00:59
The attorney for corrections officer Gene Palmer says Palmer admits smuggling hamburger meat to inmates David Sweat and Richard Matt. However, he says he didn't know about tools hidden in the meat or the inmates' plan to escape. (June 25) USA TODAY
2 of 22

TWO MURDERERS ESCAPE UPSTATE N.Y. PRISONManhunt for escaped prisoners heats up after possible sighting | 02:06
Officals are searching for the two escaped convicted killers in Allegany County in New York after a "credible" tip suggesting possible sighting of the two killers. VPC
3 of 22

TWO MURDERERS ESCAPE UPSTATE N.Y. PRISONPrisoners' escape tools were smuggled in hamburger meat | 00:44
The prison worker that conspired with murderers Richard Matt and David Sweat to escape from a New York prison, smuggled hacksaw blades and other tools inside ground beef, according to the district attorney. USA TODAY
4 of 22

TWO MURDERERS ESCAPE UPSTATE N.Y. PRISONManhunt for escaped killers shifts back to prison area | 00:45
After aggressively following a lead in Friendship, New York in the search for escaped prisoners David Sweat and Richard Matt, authorities shifted their focus to a place near the Clinton Correctional Facility, where the murders escaped from on June 6. VPC
6 of 22

TWO MURDERERS ESCAPE UPSTATE N.Y. PRISONPolice: NY prison escapees' DNA found at cabin | 01:55
The search for two New York prison escapees continues. Authorities say they found items belonging to the convicted killers in a hunting cabin in North Country. Boots, bloody socks and a jar of peanut butter were among the items left behind. VPC
7 of 22

TWO MURDERERS ESCAPE UPSTATE N.Y. PRISONReward for info on escaped inmates tops $100K | 02:09
Police followed up on a tip from a witness who claims to have spotted two men matching the description of escapees David Sweat and Richard Matt. A $100,000 reward is being offered for information that leads to the capture of these two men. VPC
8 of 22

TWO MURDERERS ESCAPE UPSTATE N.Y. PRISONDA: Jail worker supplied contraband to escapees | 01:42
A prison employee being questioned about her suspected role in the escape of two murderers provided them with contraband before they broke out, a prosecutor said. (June 12)
13 of 22

TWO MURDERERS ESCAPE UPSTATE N.Y. PRISONSearch for NY prison escapees enters sixth day | 02:34
The search for two convicts who broke out of an upstate New York prison is now in its sixth day. Bloomberg's Mark Crumpton and Scarlet Fu have more on "Bloomberg Markets."Bloomberg
15 of 22

TWO MURDERERS ESCAPE UPSTATE N.Y. PRISONOfficial: No credible threat that escaped inmates are in VT | 01:39
Vermont officials give updates on two escaped prisoners, saying there is no "credible threat" that the two men are currently in the state. VPC
16 of 22

TWO MURDERERS ESCAPE UPSTATE N.Y. PRISONReports: Prison seamstress linked to escaped killers | 01:23
A married prison seamstress is now at the center of reports surrounding the escape of two killers from a New York state prison. CNN reports the 51-year-old was supposed to drive the getaway car. VPC
17 of 22

TWO MURDERERS ESCAPE UPSTATE N.Y. PRISONEscaped inmate's son baffled by father's prison break | 01:37
Nicholas Harris never had a relationship with his biological dad Richard Matt, one of the two inmates who escaped a New York state prison. Harris doesn't know much about the convicted killer, but he's sure of this: "I don't think he's coming here." VPC
18 of 22

TWO MURDERERS ESCAPE UPSTATE N.Y. PRISONNY police say escaped inmates could be anywhere | 01:14
New York law enforcement officials say they "are leaving no stone unturned" in the search for two convicted murderers who broke out of prison on Saturday. (June 7) AP
19 of 22

TWO MURDERERS ESCAPE UPSTATE N.Y. PRISONPrison escapees through history have been very creative | 01:57
Take a look back at some of the most notable prison breaks throughout history, including the tools and creativity they used to make their escapes. VPC
21 of 22

TWO MURDERERS ESCAPE UPSTATE N.Y. PRISON'The Shawshank Redemption' brought to life? Not quite | 01:45
Many on social media and the news are comparing the recent prison break in New York to the plot of "The Shawshank Redemption.' However, there are many fundamental differences when looking closer at the escape. Collin Brennan, USA TODAY, AP, Columbia Pictures
22 of 22
Next Video
Malone, with a population of about 15,000 people, is located in rugged, mountainous terrain in Franklin County.
The Press-Republican newspaper, quoting unidentified sources, reports that DNA evidence taken at two sites, including a cabin in the Malone area, confirmed the recent presence of the fugitives. 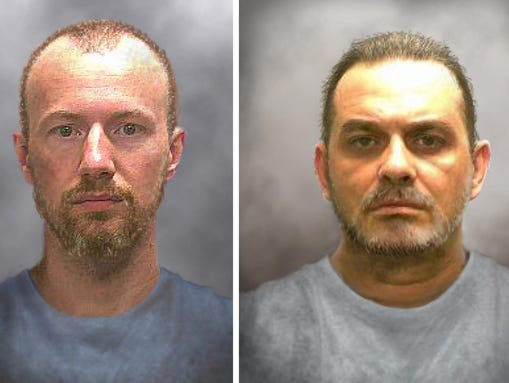 Progression images show what escaped inmates David Sweat, left, and Richard Matt might look like now. (Photo: New York State Police)
Similar DNA evidence showed that the pair had been at a hunting camp last Saturday in Mountain View, about 10 miles southeast of Malone.
Guess said Friday afternoon that 1,100 officers — local, state and federal — are involved in the search in what he called "rugged, tenacious" forests and mountains. He said the weather has been as hard on the inmates as on the officers looking for them.
As police concentrated their efforts in the new area, residents began receiving robocalls starting at 7 a.m. Friday alerting them to the increased presence of law enforcement officers.
One local resident, Clytis Primeau, a retired civilian communications specialist for the State Police, told the newspaper that stakeouts were set up every tenth of a mile along his road throughout the night.
Guess said the two men still appeared to be traveling together and had taken "basic supplies" from a cabin and had "dropped some items" during their trek. 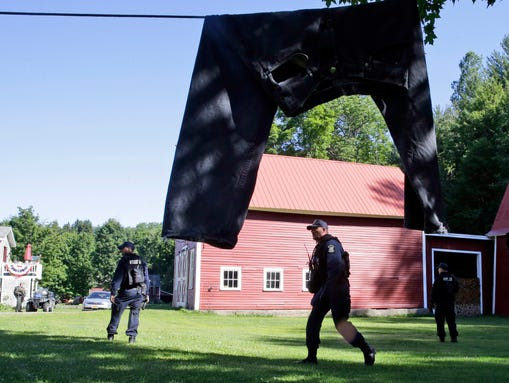 New York State Department of Corrections Officers search an area in Owls Head, N.Y., for convicted murderers Richard Matt and David Sweat, Friday, June 26, 2015. (Photo: Mary Altaffer, AP)
Guess said there was no reason to believe that the pair had made it to Canada yet, noting that Canadian border patrols were "standing up a picket line to ensure they did not cross the border."
In Canada, Jeremy Laurin, spokesperson for the Office of the Minister of Public Safety and Emergency Preparedness, said Canadian security officials were working closely with their U.S. counterparts. "Canada will not be a safe haven for violent criminals and terrorists," he said.
Joyce Mitchell, 51, a prison worker, has been charged with aiding the escape, allegedly by hiding tools in meat.
A second corrections officer, Gene Palmer, has been arrested on charges of promoting prison contraband, tampering with evidence and official misconduct in connection with the escape.


Posted by firesprinklers at 4:01 PM