CAPE CANAVERAL. -- A SpaceX Falcon 9 rocket carrying supplies for the International Space Station broke apart less than three minutes after a 10:21 a.m. Sunday blastoff from Cape Canaveral Air Force Station.
SpaceX confirmed the rocket's first stage experienced a problem as it climbed into clear skies, and engineers have begun analyzing data to pinpoint what went wrong.
"Falcon 9 experienced a problem shortly before first stage shutdown," SpaceX CEO Elon Musk said on Twitter. "Will provide more info as soon as we review the data."
A press conference providing more information is planned at 12:30 p.m.
The failure was SpaceX's first by a Falcon 9 after 18 successful missions.
Lost were more than 4,300 pounds of food, supplies and spare parts bound for the ISS, and a docking adapter intended to be use by future commercial U.S. crew vehicles in a few years.
SpaceX's Falcon 9 is expected to launch some of those crew missions, and the rocket failure is sure to raise questions about NASA's Commercial Crew Program, which is led from Kennedy Space Center.

A SpaceX Falcon 9 rocket carrying an unmanned Dragon capsule exploded after liftoff today from Cape Canaveral, Florida. VPC
In addition to SpaceX, Boeing is also developing the CST-100 capsule to fly atop United Launch Alliance's Atlas V rocket, which has more than 50 successful flights.
The failure raises questions about how to keep the International Space Station fully staffed and able to continue research at a normal pace.
Currently three astronauts and cosmonauts are living on board, including two who are expected to live there for a full year.
NASA said before the launch that the station had enough food to last into October without any additional resupply. If SpaceX's Dragon had arrived successfully, it would have extended supplies through the end of the year. 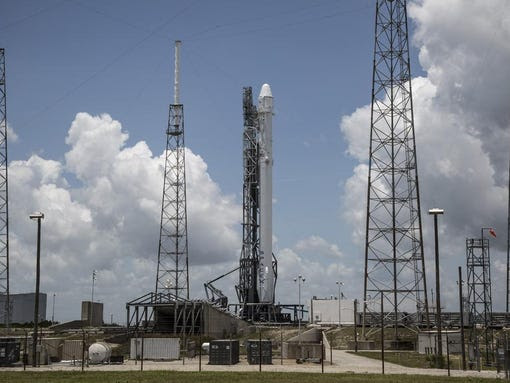 A SpaceX Falcon 9 rocket and Dragon capsule on the pad at Cape Canaveral Air Force Station’s Launch Complex 40. The rocket on Friday completed a successful test-firing of its nine main engines. (Photo: SpaceX via Twitter (@SpaceX))
The Falcon 9 failure follows an April failure by a Russian rocket carrying a Progress resupply ship just as it was reaching orbit. Last November, an Orbital Sciences Corp. Antares rocket carrying a Cynus cargo ship blew up shortly after liftoff from Virginia's Eastern Shore.
The next Progress is expected to launch later this summer. Orbital is now targeting a November launch of a Cygnus cargo craft on an Atlas V rocket from Cape Canaveral.
Today's countdown had appeared to proceed very smoothly, and the weather was nearly perfect for launch..
Posted by firesprinklers at 9:20 AM