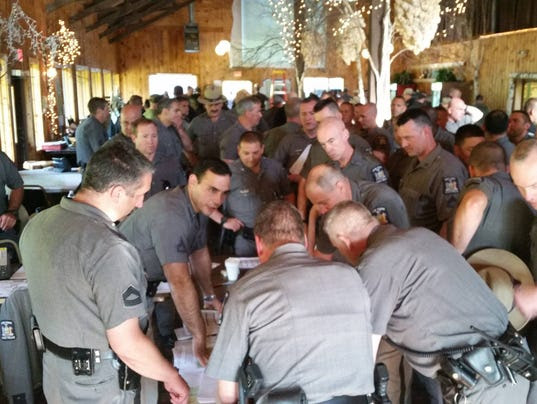 (Photo: NYSP)
36CONNECT 118TWEET 1LINKEDIN 9COMMENTEMAILMORE
MALONE, N.Y. — Police concentrated their full contingent of over 1,000 officers Saturday on the search for escapee David Sweat after his prison-break partner was shot and killed by a federal agent in dense, mountainous forests only miles from the Canadian border, officials said.
Superintendent Joseph D'Amico said Richard Matt was armed with a 20-gauge shotgun when he was shot and killed Friday afternoon by a  agent.
"Officers verbally challenged him, told him to put up his hands," D'Amico said. "When he did not comply, he was shot."
Matt, 49, was serving a 25-years-to-life sentence for the 1997 kidnapping, torture and hacksaw dismemberment of his boss when he and 35-year-old Sweat cut their way out of the , a maximum-security prison in Dannemora, N.Y., three weeks ago. Sweat was serving a life sentence without parole for killing a sheriff's deputy. 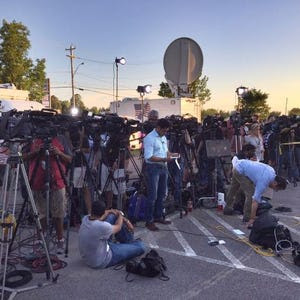 USA TODAY
In small town, a scene unlike anything as manhunt unfolds
After Matt was killed, law enforcement teams pursued Sweat to an area near the southern tip of Lake Titus, in the , about 30 miles west of the prison.
The search has been concentrated for two days around Malone, N.Y., a town of around 15,000 residents located 10 miles south of the Canadian border.
On Saturday morning, there was a particularly heavy police presence — state troopers, SWAT teams and police vehicles — at a roadblock on Route 41 in Malone. 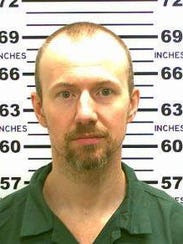 David Sweat, shown in a May 21, 2015, escaped from an upstate maximum-security prison on June 6, 2015. (Photo: AP)
Gov.  told reporters there is no reason to believe Sweat wasn't with his now dead companion at the time of the shooting, but there was no hard evidence on his whereabouts.
"These are dangerous, dangerous men," Cuomo said. "We will do what we have to do to bring them to justice."
D'Amico also said there has not been a confirmed sighting of Sweat. He said Matt apparently stole his shotgun a week ago from an unattended hunting cabin around Black Cat Mountain. 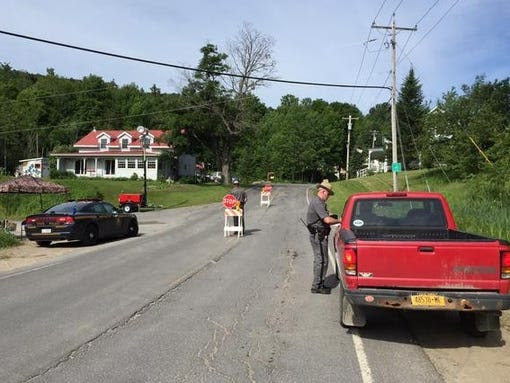 Police intensify their search around Malone, N.Y., for escaped inmate David Sweat on June 27, 2015. (Photo: Philip Tortora, The Burlington Free Press)
Major Charles Guess, Troop B commander of the New York State Police, said evidence found Friday prompted officers to concentrate their search north and west of Malone.
Searchers closed in on the pair after receiving a 911 call from a woman who heard someone knock on her door early Friday, said U.S. , who was briefed by the Border Patrol and .
"She didn't answer the door, but she called the police," he said, according to the Associated Press. "They brought the dogs, and they got a scent. They followed that scent and put out a lot of troops around the cabin. They came upon him and found him and killed him." 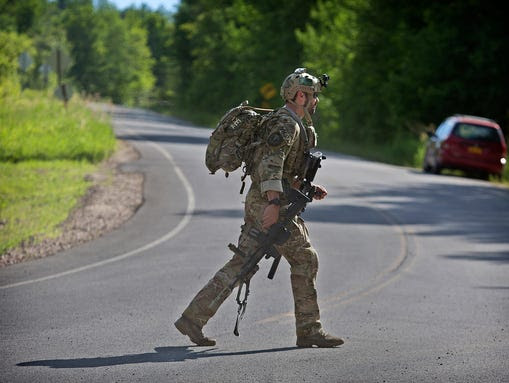 An officer leaves the operations command post at Titus Mountain, in Malone, N.Y., Friday night, June 26, 2015, to search for escaped prisoner David Sweat after Richard Matt was shot and killed. (Photo: Jason Hunter, The Watertown Daily Times via AP)
Joyce Mitchell, 51, a prison worker, has been charged with aiding the escape, allegedly by hiding tools in meat.
Prison guard Gene Palmer, a 27-year-veteran who worked on the "honor" cellblock where the killers were housed, has been arrested on charges of promoting prison contraband, tampering with evidence and official misconduct in connection with the escape.
He told investigators he did favors for the prisoners — including giving them pliers and a screwdriver and allowing them into the rear catwalk — in exchange for paintings by Matt and information on illegal activity by other inmates.
Matt and Sweat escaped by cutting through a metal wall and some pipes and tunnels, then crawling from a manhole outside prison walls. It was the first escape there in 150 years.

Posted by firesprinklers at 8:29 AM