Trump jumps in: The Donald's latest White House run is officially on

Will people stop listening to Trump?

Donald Trump on unemployment in the US

Donald Trump's 15 minutes may be up

Will people stop listening to Trump?

Donald Trump on unemployment in the US

Donald Trump's 15 minutes may be up

Donald Trump will appear on "State of the Union with Jake Tapper" this Sunday at 9 a.m. EDT.
New York (CNN)Donald Trump finally took the plunge.
The real estate mogul and TV reality star launched his presidential campaign Tuesday, ending more than two decades of persistent flirtation with the idea of running for the Oval Office.
"So, ladies and gentlemen, I am officially running for president of the United States, and we are going to make our country great again," Trump told the crowd in a lengthy and meandering 45-minute speech that hit on his signature issues like currency manipulation from China and job creation, while also taking shots at the president and his competitors on the Republican side.
"Sadly the American dream is dead," Trump said at the end of his speech. "But if I get elected president I will bring it back bigger and better and stronger than ever before." 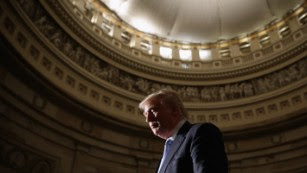 Donald Trump in the public eye 20 photos
EXPAND GALLERY
Just over four years after he came closer than ever to launching a campaign before bowing out, Trump made his announcement at the lavish Trump Tower on Fifth Avenue in New York, laying out a vision to match his incoming campaign slogan, "Make America Great Again."
The 68-story tower venue Trump used Tuesday was more than just the backdrop to Trump's presidential announcement, instead becoming a physical embodiment of what Trump is bringing to the table and the challenges he'll face as he formally enters politics: it's both a sign of his overwhelming success in business and, as the site of the famous "Apprentice" boardroom, a symbol of the reality TV label he'll struggle to shake off.
The Tower, also home to "The Apprentice" television shows, crystallized the challenge Trump faces as he looks to win over voters.
Many Americans now view him primarily as a reality TV star after 14 seasons of his "Apprentice" series, and his numerous flirtations with a presidential run -- first in 1987, then 1999 and again in 2004, 2008 and most recently in 2011 -- have left voters eye-rolling as he prompted yet another round of will-he or won't-he speculation.
Trump has already billed himself as the "most successful person ever to run for the presidency, by far," pointing out even that he owns a "Gucci store that's worth more than Romney."
That Gucci store wasn't far as Trump made his announcement -- it's located in the lobby of the Trump Tower.
But Trump showed Tuesday that he won't shy away from the out-of-reach luxury and opulence that makes up his day-to-day lifestyle.
Instead, he flaunted his wealth and success in business as a centerpiece of his presidential platform, and he began that officially on Tuesday, trumpeting his whopping $8.7 billion net worth during his announcement speech. Trump's net worth was previously estimated at roughly $4 billion.
"That's the kind of thinking our country needs," Trump said after reading off his net worth, to the thousandth dollar.
He pointed out that his wealth and successful business career not only qualified him to be president -- "I will be the greatest jobs president that God ever created." -- but that it would allow him to rid himself of the special interests that he said control American politics.
That's because the billionaire said he would self-fund his presidential campaign, not only ridding himself of some outside influences, but also freeing up more time to campaign as candidates can often spend about half their time raising funds to keep their campaign coffers from depleting.
"I'm really rich," Trump said, adding that his confident attitude is what the country needs after having "losers" run the country.
Trump's press aide released a one-page summary of his assets and liabilities on Tuesday and Trump pledged to release the full financial disclosure, including income tax returns, required by the Federal Election Commission before the first debate.
Trump's wealth and results-driven success is business is part of what he hopes will be his appeal to voters as he looks to set himself apart from career politicians.
"I've watched the politicians, I've dealt with them all my life," Trump said. "They will never make America great again. They don't even have a chance."
It's his confidence that business associates say has made him the successful mogul he is today.
"He has the guts and the balls," said Roberto Bezjon, a Trump Organization board member and owner of a high-end New York hair salon located in a Trump building. "He's a straight shooter."
Supporters gathered for the announcement had the same impression. Many of them were either several-time supporters of Trump's past flirtations with elected office or small business owners in New York who said they were confident Trump would be a boon for the economy.
Supporters donning "Make America Great Again" T-shirts -- several of them boisterous and interjecting loudly in the middle of Trump's speech -- shuffled up golden elevators to watch from two stories up.
Outside, campaign volunteers flagged down pedestrians to hand them the campaign T-shirts and invite them inside for the announcement.
The spectators got a flavor for the type of candidate Trump plans to become -- one who shoots from the hip and doesn't care for a script -- and the ideas he'll promote.
Trump called for everything from new infrastructure ("We're becoming a third world country!") to erecting a massive fence on the border with Mexico -- which he said he would have Mexico pay for -- to the need for a thorough plan to defeat ISIS.
And the man himself was always at the center of Trump's ideas:
"No one would be tougher on ISIS than Trump," he said, referring to himself in the third person.
"We need a truly great leader," he said earlier, before pointing several times to his skills as a negotiator. 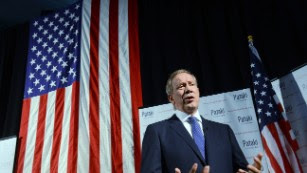 Who's running for President? 16 photos
EXPAND GALLERY
But it's not clear whether Americans are ready yet to give Trump a chance to become that leader.
In recent polls, more than half of Republicans said they had a negative view of him -- a tough spot to start a campaign.
He and his aides remain confident, though, that voters will take Trump seriously after he has now made his intentions clear and announces he's running.
"We can change that dynamic in 15 seconds by Mr. Trump sending out a press release saying he's running for president," Trump's top political adviser Corey Lewandowski said before the speech. "Mr. Trump's single biggest detriment is that people don't think he's going to run."
But over the past several months, Trump has ramped up his political activity, making key staff hires in the early states of Iowa, New Hampshire and South Carolina -- including the political strategist who drove former Sen. Rick Santorum to a surprise victory in the Iowa caucus in 2012.
And even as he becomes the 12th candidate to throw his hat into a ring that will become even more crowded before the first televised debate in August, Trump could find himself grinning on Fox News along with the rest of the top 10 candidates who made the cut.
Fox is limiting participation in the first debate to the top 10 GOP contenders based on national polling, and Trump is just on the edge based on the latest polls.
He tied for 10th place with 3% in the latest CNN/ORC poll earlier this month and earned 4% in both the most recent Fox News and Washington Post/ABC News polls -- coming in 10th and tied for ninth, respectively.
That puts Trump right in line with would-be-rivals like Santorum, New Jersey Gov. Chris Christie and former New York Gov. George Pataki -- and above hopefuls like Sen. Lindsey Graham of South Carolina and Louisiana Gov. Bobby Jindal.
Trump will look to escape that grouping as he challenges conventional political notions of nominating a presidential candidate who's held elected office, instead calling for an end to the politics he says are heavy on talk and light on action.
Trump is no stranger to either, though.
He famously fanned the flames of the "birther" movement and today takes credit for President Barack Obama's decision to release his birth certificate -- which Trump said this year at CPAC hasn't completely quelled his concerns.
And he won't mince words when it comes to his GOP foes, either. And he may take the opportunity to draw a contrast with former Florida Gov. Jeb Bush, who formally announced his candidacy just a day before Trump's announcement.
Trump said earlier this year in Iowa: "The last thing we need is another Bush."
Donald Trump will appear on "State of the Union with Jake Tapper" this Sunday at 9 a.m. EDT.


Posted by firesprinklers at 11:18 AM