BY BLAKE BAKKILA
@bcbakkila
07/31/2016 AT 05:10 PM EDT
At least two people have been killed, two are missing and 120 were rescued after a tragic flooding in several parts of Maryland on Saturday night, according to the Washington Post. People took to social media to share several videos of the floods. One Facebook video in particular showed several people forming a human chain while trying to rescue a woman in her car. Maryland Governor Larry Hogan signed an executive order declaring a state of emergency on Sunday morning, and is now working with local officials to survey the damage following the deadly flooding, according to a press release issued by the governor's office.  "We are coordinating all available resources to address this emergency as quickly as possible," Governor Hogan said in the press release. "Our administration is working closely with local officials , including Howard County Executive Allen Kittleman, to respond to this major storm event."  Kittleman declared a state of emergency just before midnight, and the county opened a community center to shelter all displaced persons,NBC reports. 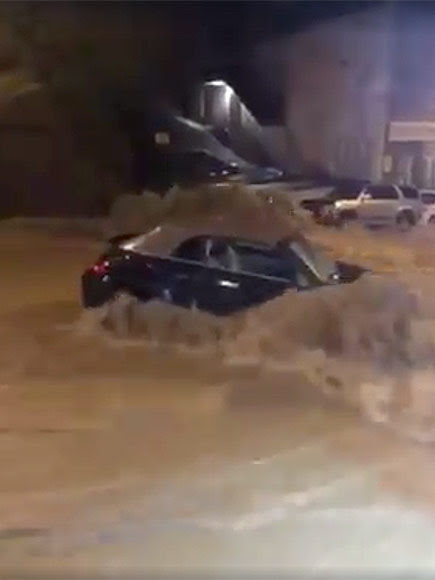 Ellicott City, Maryland
SOURCE: JAMIE ELIZABETH / FACEBOOK
Andy Barth, Kittleman's press secretary, told NBC that a man and woman were killed and their deaths were associated with the flooding. The victims have not yet been identified. "The devastation is quite remarkable," Barth said. "I've done this a lot, and I've never seen it like this."  Howard County police said a body was found in a Baltimore County river, but could not confirm whether the death was related to the flooding, according to the NBC report. The flood caused severe property damage as well, most notably in the historic town of Ellicott City, Barth told NBC. The Washington Post reported that Kittleman said Ellicott City's historic Main Street looked like "a scene from a disaster movie," adding "I know there are going to be a lot of people who will lose their homes and apartments and businesses that will have a hard time rebuilding." One woman who lived on Main Street said the flood destroyed her apartment and damaged the business where she works. "The whole house shook," Kelly Secret told the Washington Post. "We thought we were gone. We have a creek behind us and a river forming in front of us ... I'm not only homeless, I'm unemployed."

Posted by firesprinklers at 5:02 PM