U.S. stocks rallied over 1 percent on Tuesday after data showed healthy growth in consumer spending but did little to remove uncertainty about whether the Federal Reserve will raise rates this week.
Speculation about when the Fed will end seven years of near-zero interest rates has dogged Wall Street for several months, with the picture complicated by recent market turbulence that some see as justification for the central bank to hold off.
"The debate around the Fed continues, but the Fed will do more damage waiting for December to raise rather than start the normalization process," said Art Hogan, chief market strategist at Wunderlich Securities.
"If they don't raise rates this week, it's a bad signal."
The Commerce Department said core retail sales rose 0.4 percent in August after an upwardly revised 0.6 percent increase in July. It was the latest sign of sturdy economic momentum and suggested the recent stock market selloff had little immediate impact on U.S. household spending.
U.S. interest rates futures implied traders place a 27 percent chance the Fed would end its near-zero interest rate policy on Thursday FFU5, up from 23 percent late on Monday, according to CME Group's FedWatch program.
"It's tough to call," said Peter Jankovskis, co-chief investment officer at OakBrook Investments LLC in Lisle, Illinois. "In the context of the world economy and the uncertainty around China, they might give it another month."
The Dow Jones industrial average .DJI rose 228.89 points, or 1.4 percent, to end at 16,599.85 points.
The S&P 500 .SPX gained 1.28 percent to 1,978.09 and the Nasdaq Composite .IXICadded 1.14 percent to 4,860.52.
All 10 major S&P sectors were up, with the industrials index's .SPLRCI 1.68 percent gain leading advancers and GE (GE.N) rising 2.14 percent.
Microsoft (MSFT.O) jumped 2.18 percent, making the biggest single contribution to the S&P's rally.
The financial index .SPSY rose 1.65 percent, led by JPMorgan's (JPM.N) 2.15 percent rise.
Stocks have been volatile since China devalued its currency in August. The S&P 500 has had moves of at least 1 percent in 12 of the past 18 sessions.
The S&P remains down 4 percent for 2015 and recently traded at 15.4 times expected earnings, a tad cheaper than the 15-year average of 15.6 times earnings, according to Thomson Reuters Starmine.
Shares of Fiat Chrysler Automobiles (FCAU.N) rose 3.42 percent. The United Auto Workers union said it will keep talking with the automaker to reach a new contract for the company's U.S. factory workers, delaying a possible strike at its most profitable operations.
Gray Television (GTN.N) jumped 13.29 percent after the broadcaster said it would buy Schurz Communications' television and radio stations for $442.5 million.
Advancing issues outnumbered decliners on the NYSE by 2,124 to 926. On the Nasdaq, 1,930 issues rose and 869 fell.
The S&P 500 index showed three new 52-week highs and five new lows, while the Nasdaq recorded 39 new highs and 67 new lows.
About 5.8 billion shares changed hands on U.S. exchanges, below the 8.0 billion daily average for the previous 20 trading days, according to Thomson Reuters data.
(Additional reporting by Tanya Agrawal; Editing by Dan Grebler) 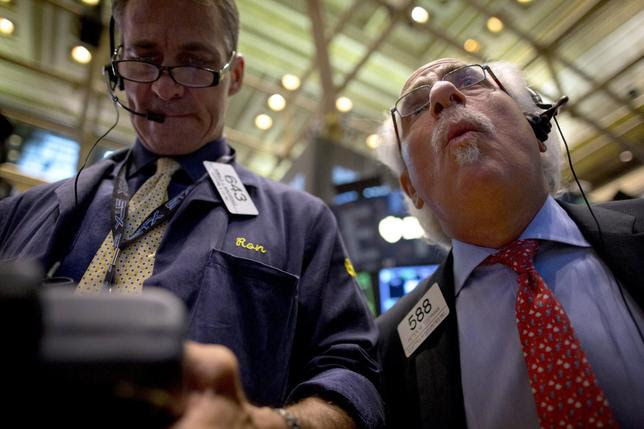 Posted by firesprinklers at 3:44 PM