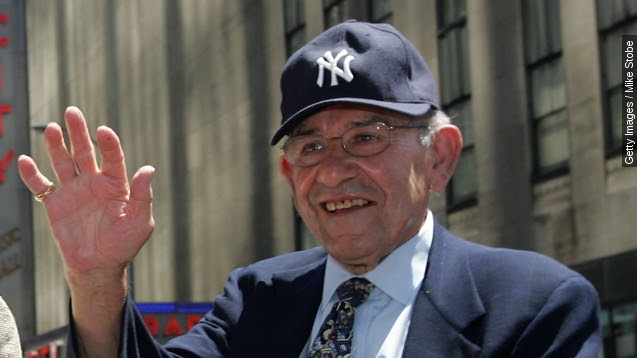 The Yankees Hall of Fame catcher was 90 years old. He was inducted into baseball's Hall of Fame in 1972. Newslook
He was , , , , and rolled into one in our consciousness.
There remains a garden statue with Yogi squatting down in his catcher’s position in front of his childhood home on the Hill in St. Louis.
It’s where he grew up, right across the street from , who also became a major-league catcher but more famous as a broadcaster and comedian.
“How could I ever say I was a great catcher,’’ Garagiola told me last summer, “when I wasn’t even the best catcher on my own block.’’
That was Yogi.
The man had a career .285 batting average with 358 homers and 1,430 RBI. No catcher has ever driven in more runs in history. He was teammates with Hall of Famers and Mickey Mantle, and for seven consecutive years, still led the Yankees in RBI. He never struck out more than 38 times an entire season. These days, guys strike out that often in a month.
And Yogi is the same man who was nominated to receive the  in 2015. The petition had nothing to do with his playing skills, but Yogi, the man. He volunteered for the Navy and served in , earning a Purple Heart. He befriended African-American players and Latino players when broke the color barrier in 1947. He was an ambassador for Athlete Ally, which promotes LGBT (lesbian, gay, bisexual and transgender) rights in sports. He also created a scholarship at . The serves 20,000 students with its character education programs.
That was Yogi too.
He was our national treasure.
And never, ever, will there be another one like him.
Yogi’s days on this earth may be over, but the memories, they’ll never be over, not even when it’s over.
Follow Nightengale on Twitter: @Bnightengale
GALLERY: YOGI BERRA -- LIFE IN PICTURES 
Posted by firesprinklers at 7:11 AM