At U.N., pope condemns 'boundless thirst' for wealth and power


Pope Francis on Friday condemned the craving for material gains and power, warning an annual gathering of world leaders at the United Nations that greed is destroying the Earth's resources and aggravating poverty.

The 78-year-old Argentine pontiff also prayed at the memorial to those killed in the Sept. 11, 2001, attacks in perhaps the most solemn moment of his first visit to the United States.

He later was greeted by adoring crowds estimated at about 80,000 people as he drove in his "popemobile" through sprawling Central Park before heading to the famed Madison Square Garden sports arena for an evening Mass before about 20,000 people.

Addressing dozens of world leaders at the U.N. General Assembly, the spiritual head of 1.2 billion Roman Catholics railed against the "grave offense" of economic and social exclusion.
"A selfish and boundless thirst for power and material prosperity leads both to the misuse of available natural resources and to the exclusion of the weak and disadvantaged," he said.
The first pope from Latin America, Francis has often criticized unbridled capitalism in the two years of his papacy.
On Friday, he had a high-powered audience at the United Nations, which is celebrating its 70th anniversary. This year's General Assembly is believed to have attracted the highest number of leaders in U.N. history.
The pontiff urged government leaders to ensure their people enjoy the minimum material needs. "In practical terms, this absolute minimum has three names: lodging, labor and land," Francis said to applause.
He said humanity's future is in danger.
"The ecological crisis and the large-scale destruction of biodiversity can threaten the very existence of the human species," said Francis, who this year published the first papal encyclical, a letter to the church, dedicated to the environment.

Francis underscored an "urgent need to work for a world free of nuclear weapons" and praised the July agreement reached by the United States and other world powers to curb Iran's nuclear program as "proof of the potential of political good will and of law, exercised with sincerity, patience and constancy."
The pope also said international financial agencies should work toward "the sustainable development of countries and should ensure that they are not subjected to oppressive lending systems" that cause greater poverty, exclusion and dependence.
'GRIEF IS PALPABLE'
Francis led an inter-religious prayer service at the site of the Sept. 11 hijacked plane attacks by al Qaeda Islamist militants that brought down the Twin Towers of the World Trade Center in Lower Manhattan.
"Here grief is palpable," Francis said, after viewing the reflecting pools that mark the footprints of the Twin Towers.
Flanked by a dozen religious leaders from the Jewish, Muslim, Hindu, Sikh, Buddhist and Greek Orthodox traditions, Francis spoke to a crowd of about 700 people in an underground gallery.
"In opposing every attempt to create a rigid uniformity, we can and must build unity on the basis of our diversity of languages, cultures and religions," Francis said.
A day after becoming the first pope to address the U.S. Congress, Francis warned in his U.N. speech against imposing Western liberal values on the rest of the world via "an ideological colonization by the imposition of anomalous models and lifestyles."
Francis called on government leaders to fight human trafficking, ban nuclear arms and promote the education of girls. Among those in the audience were Cuban President Raul Castro and Malala Yousafzai, the 18-year-old Pakistani campaigner for girls' rights to schooling.
Echoing concerns he expressed at the White House and Congress this week about the environment, Francis called for "fundamental and effective agreements" at climate change talks in Paris in December.
During the Mass at Madison Square Garden, Francis focused his homily on life in big cities populated by many forgotten or "second-class" citizens.
"They are the foreigners, the children who go without schooling, those deprived of medical insurance, the homeless, the forgotten elderly. These people stand at the edges of our great avenues, in our streets, in deafening anonymity," he said in Spanish.
The pope, who arrived in New York on Thursday night, earlier was serenaded by schoolchildren during a visit to a Catholic elementary school serving mostly Latino and black children in the city's East Harlem neighborhood, speaking with individual students at Our Lady Queen of Angels School.
Two years into his papacy, Francis has won the admiration of many in the United States, with liberals captivated by his focus on meeting the needs of the poor, immigrants and the homeless. On his U.S. trip, he has also emphasized conservative values and Catholic teachings on the family.
Francis wraps up his six-day U.S. trip in Philadelphia on Saturday and Sunday with a Catholic summit of families, a visit to a jail and a large outdoor Mass.
(Additional reporting by Susan Heavey, Barbara Goldberg, Michelle Nichols, Louis Charbonneau and Scott Malone; Writing by Alistair Bell and Will Dunham; Editing by Mary Milliken, Grant McCool and Lisa Shumaker) 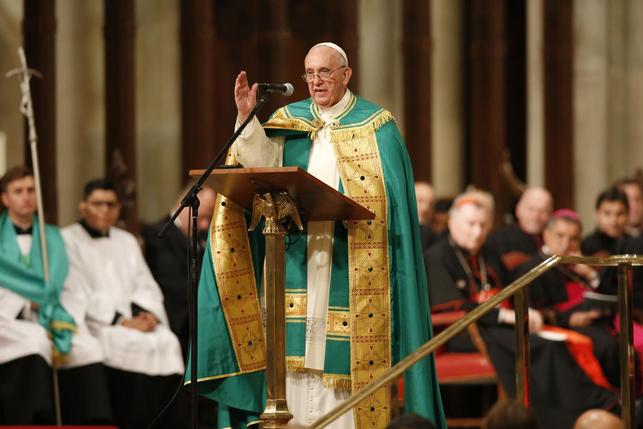 Posted by firesprinklers at 5:43 PM