A Man who traveled from Liberia to visit family members in Texas tested positive for Ebola on Tuesday, marking the outbreak's first diagnosis outside of Africa, health officials said. The unidentified patient, who is critically ill, has been cared for in a special isolation ward at Texas Health Presbyterian Hospital of Dallas since Sunday, said Dr. Edward Goodman, the hospital's epidemiologist. The patient initially sought treatment in the hospital's emergency department Friday but was sent home with antibiotics, Goodman said. The man was in apparent good health when he stepped off a commercial airliner Sept. 20 but began to feel sick four days later, said Dr. Tom Frieden, director of the U.S. Centers for Disease Control and Prevention. Frieden emphasized that the man did not become infectious until he began to develop active symptoms of the hemorrhagic fever.

The answers to 5 Ebola questions you're afraid to ask.
Federal, state and local medical teams are now scrambling to locate individuals who were in close contact with the patient and may have been infected. The virus is spread through direct contact with body fluids, including blood, saliva, vomit and feces.
"I have no doubt that we will control this importation of Ebola so that it does not spread widely in this country," Frieden said. "We will stop it here."
Henry Johnson heard the news while watching TV in the hospital's emergency room with his wife, who was waiting to be treated for a headache. The Dallas resident said the crowded room watched closely and remained calm.
But Johnson said he was worried about the people who were in the ER on Friday, as well as those who might have been exposed to Ebola after hospital staff let the patient leave.
"They should have quarantined him then," the 53-year-old chef said. "I hope they catch it before it really gets out." 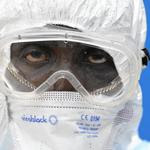 Megan Castro, 27, of nearby Mesquite wasn't aware of the Ebola patient when she arrived at the hospital with her stepson and saw news trucks parked outside.
When she learned why they were there, she stopped short of the doors and scanned the building, wringing her hands as she weighed whether to go inside.
"Have they cleaned the whole hospital?" she wondered aloud.
The two debated whether to go to a different hospital. In the end, they decided to go in. But she said hospital officials should inform visitors and patients about what was being done to contain the disease.
"The community has a right to know because there's a lot of people who come in and out of this hospital," said Castro, who works as a driver.
Goodman said the hospital had anticipated the arrival of an Ebola patient and held a meeting on the matter just last week. "Because of that we were well prepared to deal with this crisis," he said.

Ahmed Jallanzo / European Pressphoto Agency
A Liberian man carries his sick brother, suspected of having Ebola, after being unable to admit him to a treatment center on the outskirts of Monrovia due to a lack of beds.

Pascal Guyot / AFP/Getty Images
A health worker attends to a girl at the Doctors Without Borders Ebola treatment unit in Monrovia, Liberia.

Michael Duff / Associated Press
Nurses receive training from the World Health organization on how to use equipment to protect themselves from Ebola in the Sierra Leone capital, Freetown, on Sept. 18.

Tanya Bindra / European Pressphoto Agency
A police officer patrols an empty street in Freetown during a three-day, nationwide curfew in Sierra Leone. Health workers were going door to door, educating about Ebola and looking for patients.
Frieden and hospital officials declined to describe the patient or his condition in detail, citing federal privacy laws. But Frieden said the patient had been in contact with only a handful of people after he became infectious.
Officials would not say which flights the patient took from Liberia, one of the three African nations now battling the worst Ebola epidemic in history. But Frieden said other passengers on the aircraft would not have been at risk because the patient was asymptomatic at the time.
The Ebola virus incubates in a human for anywhere from two to 21 days. After the onset of fever, headaches and abdominal pain, most patients experience severe vomiting and diarrhea. As the virus continues to replicate, its effects on the body grow increasingly severe, and bleeding and organ failure can result.


cComments
ADD A COMMENTSEE ALL COMMENTS
124

A special team of CDC "disease detectives" and other experts have been dispatched to Texas to assist Dallas County Health and Human Services workers in tracing the patient's contacts. Once those people are located, they will be monitored for 21 days. If they show signs of a fever within that time, they will be isolated and tested for Ebola, officials said.
"There are no other suspected cases in the state of Texas at this time," said Dr. David Lakey, commissioner of the Texas Department of State Health Services.
Though the patient is the first to be diagnosed with Ebola in the United States, the case is by no means the first instance of viral hemorrhagic fever to be imported from Africa. In the last decade, doctors have diagnosed one case of Marburg virus, which is very similar to Ebola, and four cases of Lassa virus, Frieden said. None resulted in further transmission, he said.

Christine Mai-Duc
In West Africa, Ebola has sickened at least 6,574 people and killed at least 3,091, according to the World Health Organization. The exponential spread has been blamed on the failure to quickly recognize the threat, the lack of basic medical supplies and facilities, and the slow global response to isolate and treat the ill.
Health experts say the situation in the United States is very different. Access to premium healthcare makes a widespread outbreak here highly unlikely.
"We have the ability to trace contacts, monitor people and to act quickly if any of them should start to exhibit symptoms," said Dr. Anne Rimoin, an epidemiologist at the UCLA Fielding School of Public Health. "Had these mechanisms been in place in Liberia, Sierra Leone and Guinea, there wouldn't be this huge outbreak in the first place."
Indeed, the CDC published two studies Tuesday saying that Ebola outbreaks in Senegal and Nigeria were now under control because of the quick response of medical teams in those countries. In both cases, the disease was introduced by an infected visitor.
Although Frieden and other medical experts insisted the Ebola virus would be stopped "dead in its tracks," Dallas-area residents voiced uncertainty, particularly those in the Liberian expat community.
Stanley Gaye, president of the Liberian Community Assn. of Dallas-Fort Worth, said local Liberians were already anxious about meeting or shaking hands with those who had just returned from visits to West Africa.
"This disease is a horrible disease, and I don't want to be in a gathering with someone [whose] family has been affected by the disease," Gaye said. One member of the community has lost seven relatives to Ebola, he said.
Gaye said it would be better for public officials to release the names of confirmed Ebola patients so that others in the community could take precautions. He said his phone had been "bombarded all day" with calls from community members.
"We don't know who this person is, we don't know who their family is," he said. "I think we should know so that everyone who has been in contact with the person can look out for the symptoms and be tested.... We see what is happening right now in Africa. We don't want that happening here in the United States."
monte.morin@latimes.com
molly.hennessy-fiske@latimes.com
Twitter: @montemorin
@mollyhf
Morin reported from Los Angeles and Hennessy-Fiske from Dallas. Times staff writers Matt Pearce and Alexandra Zavis in Los Angeles contributed to this report.

Posted by firesprinklers at 10:01 PM