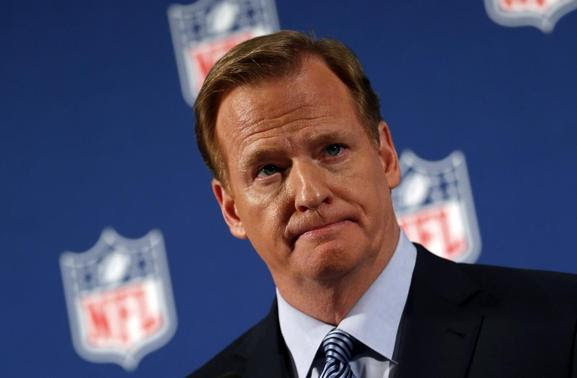 (Reuters) - A chastened NFL Commissioner Roger Goodell said on Friday that the league's poor response to its domestic violence crisis will prompt an overhaul of how it deals with player behavior and punishment in America's most popular sports league.
Rules governing personal conduct for players and other employees will change, he said, and experts from outside the league will help it shape that new policy.
A "conduct committee" will be established by the NFL to review policy, a significant concession for an organization known for its top-down, fortress-like approach to management.
"We will get our house in order," Goodell told a packed news conference."I know this because we will make it happen," he said. "Nothing is off the table. Let me say it again, we will implement new conduct policies."
It was the embattled commissioner's first public appearance in more than a week, after the number of domestic violence cases involving players grew to five, teams bowed to public pressure and major sponsors criticized the league. Doubts about Goodell's leadership spiraled in his absence.
He has been under fire since the NFL's slow and fumbled response to the domestic violence incident involving Baltimore Ravens star Ray Rice, whose knock-out punch to his then-fiancee was captured in a video that went viral last week.
"I got it wrong in the handling of the Ray Rice matter," Goodell said. "And I'm sorry for that. I got it wrong on a number of levels, from the process that I led to the decision that I reached."
He said he never considered resigning from the post he has held since 2006.
While Goodell offered no specifics on what the future would be like, it was clear he was preparing to cede a measure of the near-absolute authority that had made him one of the most powerful and well-paid figures in all of sports.
Although the committee could make the NFL punishment process more democratic, it also allows Goodell to distance himself from future controversies in how the league metes out discipline.
Goodell, who hands out punishment and rules on most appeals, is often criticized by players as being "judge, jury and executioner" on disciplinary matters.
Goodell said he will discuss many of the pending changes with the union but NFL Players Association Executive Director DeMaurice Smith was not at the news conference, raising some eyebrows.
'TOOK THE BLAME'
The domestic violence issue emerged when Goodell suspended Rice for two games after he knocked out fiancee Janay Palmer, who is now his wife, in a New Jersey casino elevator in February. Many saw the commissioner's penalty as too light.
Only when a video of the punch emerged on the website TMZ on Sept. 8 did Goodell decide to suspend Rice indefinitely. The Ravens then cut Rice from the team.
Minnesota Vikings running back Adrian Peterson, the NFL's most valuable player in 2012, and defensive end Greg Hardy of the Carolina Panthers have been placed on the league's "exempt" list until their domestic violence cases are resolved.
Sponsors who have billions invested in the NFL were unusually critical with the league this week, including brewing giant Anheuser-Busch.
Goodell, normally stoic but on Friday apologetic, spoke slowly and in a halting voice. He said personnel and staff will be required to undergo training on the prevention of domestic violence and sexual assault starting within 30 days.
He said the league will partner with the National Domestic Violence Hotline and National Sexual Violence Resource Center.
"I feel passionately that working in the NFL in any capacity is a privilege, something that we must earn every day and never take for granted," Goodell said. "The vast majority of players, owners and coaches it the NFL, stand tall."
He said the league will work with players, their union, coaches, owners and outside experts to set the right standards for changing the league's policies for domestic violence. He said the panel will examine the commissioner's role in meting out punishment.
Since the controversy erupted, Goodell has strengthened the league's penalties for domestic abuse.
Goodell's long-awaited appearance got mixed reviews in the football world and some like former NFL coach Tony Dungy said they had hoped for more answers.
"It was a step in the right direction," Dungy tweeted. "He definitely took the blame."
But calls for Goodell's resignation did not stop.
"The big reset button needs to be pushed on the NFL right now and it starts by Roger Goodell stepping down,” former New England Patriots linebacker Tedy Bruschi said on ESPN, where he now works as a commentator.
(Additional reporting by Eric Kelsey; Writing by Steve Ginsburg; Editing by Mary Millikenand Bill Trott)


Posted by firesprinklers at 10:11 PM