How Clayton Kershaw and Dodgers clinched NL West over Giants


Pitcher Clayton Kershaw, right, and teammates head from the dugout to the field to celebrate their 9-1 victory over the Giants. (Wally Skalij / Los Angeles Times)


It was storybook time at Dodger Stadium, a Dodgers’ dream come very much to life.
Clayton Kershaw, their leader all season, took the mound Wednesday and led the Dodgers to a 9-1 victory over the rival San Francisco Giants, leaving them National League West champions for a second consecutive year.
Kershaw was greeted by chants of "MVP" all night, climaxing what has been a magical year for the left-hander. Kershaw is not expected to pitch again until the playoffs. If so he finishes the season leading the majors in wins (21) and ERA (1.77) and the NL in strikeouts (239).
Related story: Dodgers' best bullpen might be no bullpen at all
Everett Cook
He even added to his MVP credientials Wednesday by tripling in the Dodgers' first run. Yasiel Puig's solo homer in the sixth put the Dodgers ahead 2-1.
The Dodgers are expected to have a postseason rematch with the St. Louis Cardinals in a best-of-five-games division series beginning Oct. 3.
The first two games -- and the last, if needed -- would be played at Dodger Stadium. Last October, the Cardinals defeated the Dodgers in the National League Championship Series.
Wednesday, though, was for celebrating 2014. There was no visiting pool to jump in, but the Dodgers rushed the field after the final out to experience a party at home.
Kershaw (21-3) appears headed for a third NL Cy Young Award and, very possibly, his first league MVP title.
lRelated 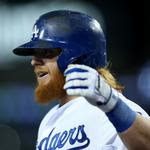 SEE ALL RELATED
8
Wednesday was the high point to an uneven, if still highly successful, season for the Dodgers. They never proved the super team many assumed their record payroll would provide, but nonetheless proved effective enough.
The Dodgers went in to San Francisco on July 23 with a 56-47 record, trailing the Giants by two games in the standings. They swept the three-game series and never looked back, leading the division the rest of the way.
The Giants led the Dodgers by 9½ games on June 4, and they had a record of 43-21 four days later when they began a stunning fall, going 42-52 the rest of the way.
CAPTIONPhotos: Dodgers clinch NL West title
Wally Skalij, Los Angeles Times
The Dodgers celebrate after defeating the Giants and clinching the NL West title at Dodger Stadium.
CAPTIONPhotos: Dodgers clinch NL West title
Wally Skalij, Los Angeles Times
Clayton Kershaw leads the celebration as the Dodgers win the NL Western Division title.
CAPTIONPhotos: Dodgers clinch NL West title
Wally Skalij / Los Angeles Times
Winning pitcher Clayton Kershaw leaps onto catcher A.J. Ellis as the Dodgers celebrate their NL West title after defeating the San Francisco Giants, 9-1, on Wednesday night at Dodger Stadium.
CAPTIONPhotos: Dodgers clinch NL West title
Wally Skalij / Los Angeles Times
Pitcher Clayton Kershaw, right, and teammates head from the dugout to the field to celebrate their 9-1 victory over the Giants.
CAPTIONPhotos: Dodgers clinch NL West title
Wally Skalij / Los Angeles Times
Dodgers center fielder Yasiel Puig celebrates with teammates in the clubhouse after defeating the Giants to win the NL West title.
The Dodgers were led by their starting pitching trio of Zack Greinke, Hyun-Jin Ryu and Kershaw. They are the team strength the Dodgers will count upon to carry them in the postseason. When they start, the Dodgers are 53-25; when any other pitcher starts, they are 38-43.
Ryu is out with a sore shoulder. The Dodgers are hopeful he can return to start in the division series.
Kenley Jansen filled the closer’s role as expected, which was no simple task. He was asked to be dominant every time he was handed the ball, and for the most part he was exactly that. Jansen has 44 saves, tied for the National League lead with Atlanta’s Craig Kimbrel and St. Louis’ Trevor Rosenthal.
However, getting the ball to Jansen has been a regular pursuit for the Holy Grail. The Dodgers are still searching and experimenting heading into October, the bullpen remaining their largest area of concern.
cComments ADD A COMMENTSEE ALL COMMENTS
12
The team’s original plan of mixing former All-Star closers Brian Wilson, Brandon League and Chris Perez as eighth-inning setup men for Jansen never really took. Only left-hander J.P. Howell has been consistently reliable.
Offensively, the Dodgers have not been the monster fans had anticipated, but they are still one of baseball’s best-hitting teams. They are third in the majors in hitting (.264), tied for first in on-base percentage (.331) and sixth in slugging (.403).
They seldom had their lineup fully healthy, though it appears to be now.
The Dodgers received a pair of offensive surprises this year in Dee Gordon and Justin Turner. Neither was a lock to even make the team going into spring training.
Dee Gordon leads the majors in stolen bases (64) and triples (12), and the Dodgers in runs (90). (Jae C. Hong / Associated Press)
Gordon had been shuttled all over the field as the team tried to find a role for him. But when Cuban prospect Alex Guerrero struggled defensively at second, Gordon seized the opportunity.
Gordon not only filled their need for a leadoff hitter, but he leads the majors in stolen bases (64) and triples (12), and the team in runs (90).
Turner was a non-roster invitee to spring training who caught fire in May and never cooled. He’s been a utility man extraordinaire, playing every infield position while leading the team in hitting (.333). In only 282 at-bats, he has seven home runs and 41 runs batted in.
Their one consistent offensive force has been Adrian Gonzalez. The first baseman leads the majors with 112 RBIs and can expect to get a share of National League MVP votes.
After a slow start, Matt Kemp has more resembled the player who nearly won the NL MVP in 2011. Three surgeries behind him, he’s hit .304 in the second half. Perhaps most encouraging for the Dodgers, he’s been destroying the ball in September, with eight homers and 22 RBIs.
Shortstop Hanley Ramirez has battled various ailments over the course of the season and never really looked like the guy who led the Dodgers offensively last season. Still, even he finished well, hitting better than .400 in his last 18 games.
Carl Crawford has come alive the second half, while Juan Uribe has hit a career-high .311. Puig remains dynamic, if struggling offensively in the second half.
Are they a better team than last year? It's certain now that they will have an opportunity to find out.
Copyright © 2014, Los Angeles Times


Posted by firesprinklers at 3:25 PM