British PM on New ISIS Beheading: 'They're Not Muslims, [But] Monsters'


British Prime Minister David Cameron said today that the brutal beheading of a British aid worker by the terror group ISIS, which follows the execution of two American journalists, showed exactly why the U.K. needed to work to destroy the organization, "the embodiment of evil."
"The fact that an aid worker was taken, held and brutally murdered at the hands of ISIL [ISIS] sums up what this organization stands for," Cameron said in an address to the British people. "They boast of their brutality; they claim to do this in the name of Islam. That is nonsense. Islam is a religion of peace. They are not Muslims, they are monsters."
Cameron spoke hours after a video emerged online that appeared to show the murder of British citizen David Haines at the hands of a black clad ISIS militant. Before his death, Haines reads from a scripted statement, saying Cameron is "entirely responsible" for his impending murder.
"You entered voluntarily into a coalition with the United States against the Islamic State [ISIS], just as your predecessor Tony Blair did, following a trend amongst British Prime Ministers who can't find the courage to say no to the Americans," Haines says.
Today Cameron said the U.K. would not be cowed.
"We cannot just walk on by if we are to keep this country safe; we have to confront this menace," he said. "Step by step, we must drive back, dismantle and ultimately destroy ISIL [ISIS] and what it stands for. We will do so in a calm and deliberate way, but with an iron determination. We will not do so on our own, but by working closely with our allies, not just the United States and in Europe, but also in the region because this organization poses a massive threat to the entire Middle East." 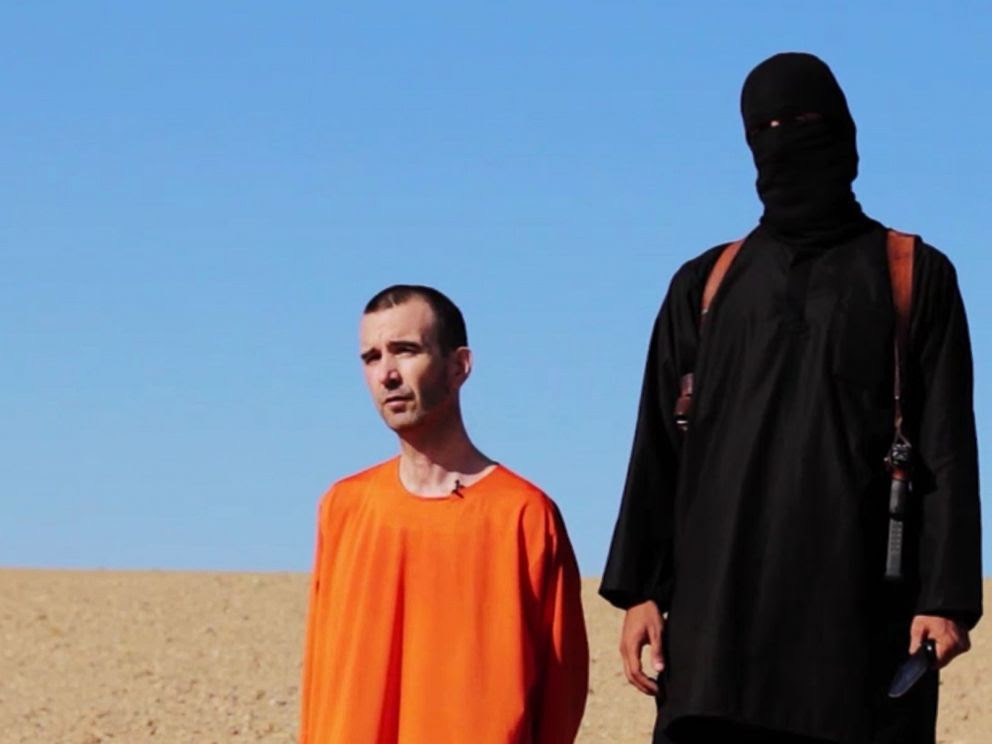 AP Photo
PHOTO: British citizen David Haines makes a statement to the camera in a video released online Sept. 13, 2014, that purports to show an ISIS militant executing him.
Haines, 44, was abducted in Syria in 2013 as he worked for an international aid agency, according to The Associated Press.
Haines’ brother, Michael, issued a statement through the British Foreign Office about David who he said “was recently murdered in cold blood.”
“David was like so very many of us, just another bloke,” Michael Haines said. “David was a good brother, there when I needed him and absent when I didn’t…He helped whoever needed help, regardless of race, creed or religion.
“David was most alive and enthusiastic in his humanitarian roles… He was and is loved by all his family and will be missed terribly,” Michael Haines said.
The new video is similar to two previously released by ISIS in which two American journalists,James Foley and Steven Sotloff, appeared to be separately beheaded. In those videos, a black clad militant addresses President Obama, warning America to stop its aggressive bombing campaign against ISIS.
Digital Feature: What Is ISIS?
'So Little Compassion': James Foley's Family Says Officials Threatened Family Over Ransom
New Rescue Mission for ISIS Hostages Difficult, But Still Possible, Experts Say
Haines was previously seen at the end of the Sotloff video, ISIS implying that he would be next. Similarly, another hostage appears at the end of this new ISIS video.
President Obama issued a statement Saturday saying the U.S. "strongly condemns the barbaric murder."
"The United States stands shoulder to shoulder tonight with our close friend and ally in grief and resolve," Obama said.
In addition to the second hostage shown at the end of the video, ISIS is believed to be holding at least one other Westerner, a 26-year-old American woman.
Military special operations veterans told ABC News that in addition to the overt message delivered by Haines and his purported killer, the circumstances of the video’s production could be signal to Western intelligence. By shooting in broad daylight and in open desert, the officials said ISIS could be saying that it feels safe from the long reach of Western and allied militaries and intelligence.
Posted by firesprinklers at 9:42 AM