STORY HIGHLIGHTS
Ebola is in the U.S. Now what? Post your questions on Twitter using #EbolaQandA and our @CNN experts will reply with answers.
Atlanta (CNN) -- It's a lapse that has Americans concerned and health officials asking how it could happen.
A man who had Ebola but didn't know it walked into a Dallas emergency room September 26. Although his symptoms could have indicated Ebola among other things, no one at the hospital asked him if he had recently traveled, a source close to the case told CNN.
The man, who had just flown from Liberia to the States didn't offer the information either, the source said, and the man left the hospital. A spokesman for Texas Health Presbyterian Hospital says it's investigating whether he was questioned.
Regardless, two days passed between the time the man left and then returned to the facility September 28 where it was determined he likely had Ebola and was isolated. He tested positive Tuesday, health officials said.
The CDC advises that all medical facilities should ask for patients with symptoms consistent with Ebola for their travel history. It's possible others were infected because of the lapse.
The virus is contracted through bodily fluids. It's not like a cold or the flu, which can be spread before symptoms show up. It doesn't spread through the air.
Ebola virus: 9 things to know about the killer disease 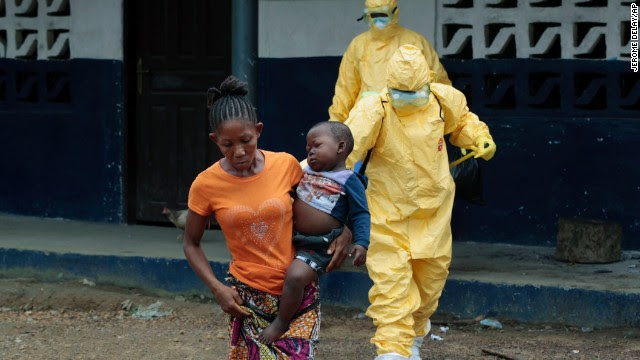 CDC: We will stop Ebola in its tracks
Isolating the patient and paramedics
The patient is now under intensive care and isolated at Texas Health Presbyterian Hospital, said CDC Director Dr. Thomas Frieden.
He is in serious condition, the hospital told CNN Wednesday.
The man flew from Liberia -- one of the Ebola hotspots in West Africa -- and arrived in Dallas to visit family on September 20, Frieden explained.
The patient started feeling ill around September 24 and sought medical care on September 26, Frieden said.
CNN Chief Medical Correspondent Dr. Sanjay Gupta asked Frieden Wednesday on "New Day" if the man should have been tested for Ebola on his first visit to the hospital, and if he should have been asked about his recent travel history.
"That's one of the things we'll be looking at," Frieden said. "But we're reiterating the message for every health worker in this country -- think about travel history. If someone's been in West Africa within 21 days and they've got a fever, immediately isolate them and get them tested for Ebola."
Gupta then asked Frieden to explain guidance the CDC has issued on that and again asked: "Should this person have been tested?" "We weren't there so I can't tell you exactly what that person said..." Frieden responded.
Gupta interjected, "You're advising public health departments. Last time I was here (at the Centers for Disease Control and Prevention in Atlanta) there was a call with many primary care doctors to educate them on this exact issue. That was a couple of months ago. Should this person have been tested?"
Frieden answered, "We know that in busy emergency departments all over the country, people may not ask travel histories. I don't know if that was done here. But we need to make sure that it is done going forward."
Air travel testing
Every person who travels by air is screened before departure and at arrival in Liberia, Guinea and Sierra Leone, but because the man says he began feeling ill days after landing in the U.S., a screening test in West Africa would likely have not turned up that he had Ebola.
However, it's unclear what kind of screening someone arriving from West Africa might receive when arriving in the United States, said CNN's Senior Medical Correspondent Elizabeth Cohen. She and her crew recently reported in and flew from West Africa, where she said they were screened numerous times for Ebola by having their temperatures taken at the airport.
Should we worry?
But when they arrived back in the United States, and asked travel officials about whether their temperatures would be taken or they'd receive screening for Ebola, they were given unclear explanations about how the process worked and ultimately were not tested.
Regardless, the CDC maintains that passengers on the Texas man's plane were likely not at risk because the man was not displaying active symptoms on the flight.
Paramedics who transported the patient to the hospital have been isolated, Dallas Mayor Mike Rawlings' chief of staff said. They have not shown symptoms of the disease so far, Frieden said.
The ambulance used to carry the patient was still in use for two days after the transport, city of Dallas spokeswoman Sana Syed said.
But she emphasized that the paramedics decontaminated the ambulance, as they do after every transport, according to national standards.
How the virus spreads
Finding the people the man came into contact with
During the time he was symptomatic, the man had a handful of contacts with people, Frieden said.
A CDC team headed to Dallas to help investigate those contacts.
Once those people are identified, they will be monitored for 21 days -- taking their temperatures twice a day -- in cooperation with local and state health officials, Frieden said Wednesday.
But Gupta pointed out that the people identified as contacts aren't, as protocol, quarantined unless they are symptomatic.
Frieden explained that people who have Ebola are not able to spread the disease unless they are symptomatic.
"We don't want to isolate parts of the world, or people who aren't sick," Frieden said, "because that's going to drive people underground and make it harder to contain this outbreak."


CNN's AnneClaire Stapleton, Chandler Friedman, Greg Botelho and Ed Payne contributed to this report.
Posted by firesprinklers at 8:48 AM