Shoot Out on I-15 in Corona


Last night, while my cousin Yale gave me a ride home, from the wedding we had both attended in Norco. Near Ontario and the I-15 , congestion became  particularly heavy, and police had closed the on-ramp at Ontario.

This story from NBC explains why.!

A fatal shooting on the 15 Freeway in the Corona area reportedly involving two rival motorcycle gangs prompted an hours-long shut down of the roadway near El Cerrito Road.
Gunfire broke out on the freeway at Cajalco Road just south of the 91 Freeway, the Riverside County Sheriff's Department said. The incident was reported about 6:30 p.m. on the CHP's traffic incident information website.
Responding officers found two males suffering from gunshot wounds. Both were taken to a hospital where one was pronounced dead and another was admitted for his injuries, according to the Riverside County Sheriff's Department.
A third person was treated for similar injuries and released. 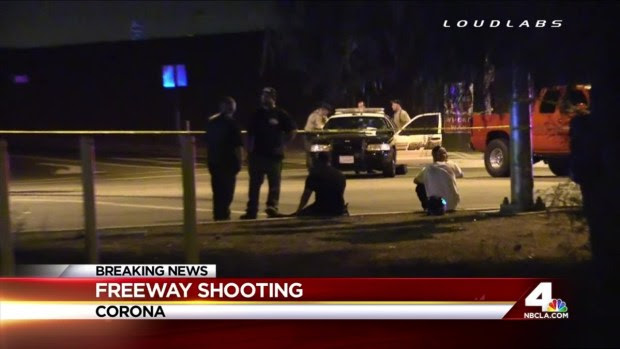 A shooting investigation on the southbound 15 Freeway in the Corona area caused a miles-long traffic jam on the freeway and the surrounding streets. Kate Larsen reports from Corona for the NBC4 News at 11 on Saturday, Sept. 20, 2014.
According to the CHP traffic incident information website, the shooting involved two rival motorcycle gangs. Those reports have not been confirmed by authorities.
Traffic was backed up for miles on the freeway and surrounding streets as drivers were diverted at Ontario Avenue. Southbound lanes of the freeway were reopened before 7 a.m. Sunday. The El Cerrito onramp and offramp were still closed Sunday morning.
Refresh this page for updates on this developing story.


Posted by firesprinklers at 10:02 PM