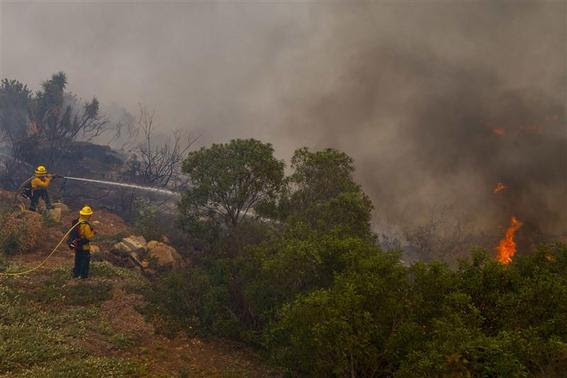 (Reuters) - A towering wall of flames charged a hillside California community on Thursday as firefighters battled fierce wildfires that have forced 125,000 people to flee homes in the San Diego area and may have killed at least one person.
Of nine major wildland blazes burning across Southern California, the so-called Cocos Fire posed the most immediate threat as it marched toward the communities of San Marcos and Escondido in northern San Diego County.
At least one large home was burned to the ground in suburban San Marcos by that fire, and television images showed towering flames moving quickly toward other homes as residents scrambled to collect belongings and evacuate.
Bright orange flames twisted in the wind, filling the sky with thick columns of black smoke. Fire engines, with lights flashing, moved along winding streets of the neighborhoods of large Spanish-style homes.
The destructive cluster of fires comes as California enters its peak fire season amid its worst drought in decades. Officials worry it could be a particularly dangerous year.
Authorities said the fires had destroyed seven homes and an 18-unit apartment building across San Diego county. Seven other homes and two businesses were damaged.
"Even as we speak, there continue to be extraordinary acts of bravery and heroism out there on the front lines," San Diego Mayor Kevin Faulconer told a news conference.
Even as firefighters fought to keep flames at bay in San Marcos, their attention was rapidly turning to protecting much larger Escondido, as winds pushed flames southeast, forcing residents to flee and leaving the community's downtown eerily quiet.
"You have to leave behind everything you've built over a lifetime. We took what matters, the photos and our dog," Escondido resident Curt Trujillo said as he prepared to head out with his wife and teenage daughter. "This is very concerning and scary."
The blaze was only about 5 percent contained by late afternoon, although fire officials said they hoped diminished winds and cooler temperatures would help them gain an upper hand overnight.
Elsewhere, a blaze that broke out on the Camp Pendleton Marine Base north of San Diego had charred some 6,000 acres.
A smaller 400-acre fire in the coastal city of Carlsbad destroyed 18 apartment units, four houses and two commercial buildings and forced the evacuation of residents, along with the Legoland amusement park and 13 employees at the largely decommissioned San Onofre Nuclear Generating Station.
That blaze was 70 percent contained on Thursday, allowing officials to lift most evacuation orders, but crews checking hot spots found a badly burned body in a transient encampment. They could not immediately confirm the person was killed by the fire.
Meanwhile, authorities said they would investigate how so many blazes started about the same time and whether any were intentionally set.
"We all have suspicions, like the public does, when you have nine fires that started all over the county," San Diego County Sheriff Bill Gore said.
(Additional reporting by Alex Dobuzinskis and Dan Whitcomb; Writing by Dan Whitcomb; Editing by Alison Williams, Gunna Dickson and Ken Wills)


Posted by firesprinklers at 8:32 PM