A bounce house in upstate New York was caught by the wind, which lifted the inflatable structure high into the air and seriously injured two boys who fell out.
lRelated 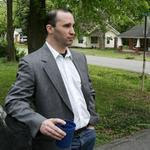 SEE ALL RELATED
5
The accident, caught in a photograph that has gone viral, is the most recent and well-publicized accident involving the bounce house, a type of toy popular at parties and in backyards. A study published in 2012 in the journal Pediatrics suggested that 31 children a day in 2010 were treated in emergency rooms for broken bones, sprains and cuts from injuries in bounce-house accidents. That is the equivalent of one injured child every 46 minutes, according to the study.
The incident took place about 3:20 p.m. Monday at an apartment building in South Glens Falls, N.Y., north of the capital, Albany. Three children, two boys, 5 and 6 years old,  and a 10-year-old girl, were playing in the bounce house when witnesses said a strong gust of wind caught it and threw it between 15 to 50 feet into the air, various witnesses told reporters.
cComments ADD A COMMENTSEE ALL COMMENTS
1
One of the boys landed on a parked car; the other landed on pavement after being tossed out of the toy. The girl fell from a lower height and sustained minor injuries, police told the Post-Star newspaper.
The boys were taken to Albany Medical Center, where they were in stable condition, police said on Wednesday. The boy who landed on a parked car in the a parking lot before falling to the pavement suffered a serious head injury, police said. The other boy had two broken arms, a broken jaw, broken facial orbital bone and possible ruptured spleen.
Taylor Seymour, a resident of the apartment building where the accident occurred and sister of the injured girl, said the wind picked the structure up and spun it around as if it was in a small tornado. The children were thrown out at about 15 to 20 feet, and the toy kept rising. Other witnesses told reporters the house reached 50 feet.
"It was like a horror movie," she said. "It just kept going up and up. It cleared our building and the trees."

Posted by firesprinklers at 1:33 PM