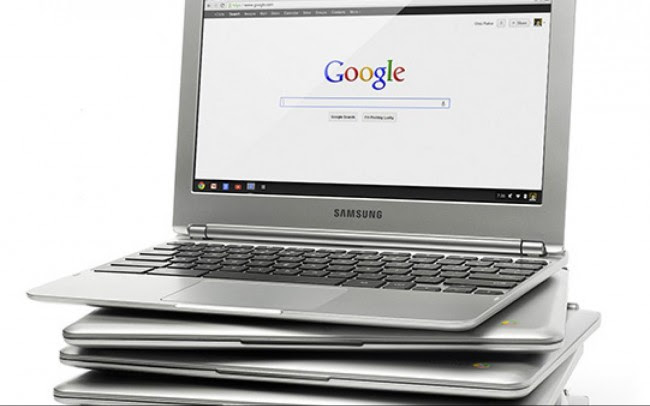 New sales figures on Chromebook sales from January to November 2013 are in from NPD Group Inc. (formerly National Purchase Diary), a consumer market research group. NPD claims that Google’s OS-based Chromebooks grabbed approximately 21 percent of the entire notebook market in 2013, making them a serious threat to Microsoft and Apple Inc.
Back in 2012, sales of Chromebooks were estimated to only account for and insignificant amount that was less than one percent of the entire notebook market. The latest 20 percent jump in market share this year is one of the largest increases across many markets according to the NPD.
The biggest players in the notebook game are of course Microsoft and Apple Inc. Both companies must be a bit concerned over Chromebooks’ new market share. Microsoft has already launched a smear campaign trying to deter people from making the switch to a Google OS. To add to their concern, more manufacturers of notebooks have recently decided to ride the new wave of Chromebook sales and have started to manufacture their own brand of Chromebooks.
When Chromebooks first hit the market they were met with doubt from the general consumer that the new concept in computing would ever leave the ground. Obvious to the NPD reports, this consumer doubt has subsided and done so at a fairly large rate over the last year.
The 2013 sales figures for Chromebook have taken their toll on Microsoft’s sales and according to NPD, Microsoft experienced a zero percent growth in their sales since 2012. Apple Inc. has also had a total of a seven percent decline in their desktop and laptop sales combined. Unlike Microsoft, Apple has not commented or responded to the new Chromebook threat.
According to the NPD’s stats, Chromebooks accounted for 1.76 million units sold in the last 11 months. This is a huge improvement from the previous year’s records that only showed 400,000 Chromebook units sold.
In a recent press release, Amazon confirmed that Chromebooks snapped up two of the three top spots for their holiday’s best seller status this season. The two top sellers were Samsung and Acer with their Chromebook version. Both manufacturers have multiple models of Chromebooks and it was unclear which actual models topped Amazon’s sales.
Amazon currently lists Acer’s C720 Chromebook as their top selling laptop computer and Samsung is listed as second. The third top selling notebook goes to Asus for their Transformer Book T100, which is actually a laptop-tablet hybrid running Microsoft Windows 8 and not the Chromebook OS.
What attributed to Chromebook’s success is that Google gives free licenses to distribute the Chrome OS to manufacturers. With the cut in OS cost, manufacturers are able to pass on the savings to the customer which makes the less expensive Chromebook a lot more affordable and attractive to buyers.
Another advantage to having a Chromebook is that the web-based Chrome OS doesn’t require high specifications to function. Having no need for the manufacturer to use expensive top-of-the-line technology, this is another cost saving advantage that Chromebook has to offer over their competitors.
A third factor that may have pushed Chromebook sales is the bad rap and criticizing that Windows 8 has been receiving from the public over the last year. This has consumers seeking other alternatives to the standard Microsoft or Apple Inc. OS’s. While some Windows 8 customers were screaming for Microsoft to give them back their start button, other consumers were walking out of stores with a new Chromebook in hand.
Whether Chromebook sales will continue to increase in 2014 is anyone’s guess. In order to further threaten Microsoft and Apple Inc., Chromebooks will have to break free from the home-user category and start to look towards taking away some of their business and corporate markets.
By Brent Matsalla
Sources:
PC Mag
Muktware
Muktware
TechnoBuffalo
Posted by firesprinklers at 7:45 PM