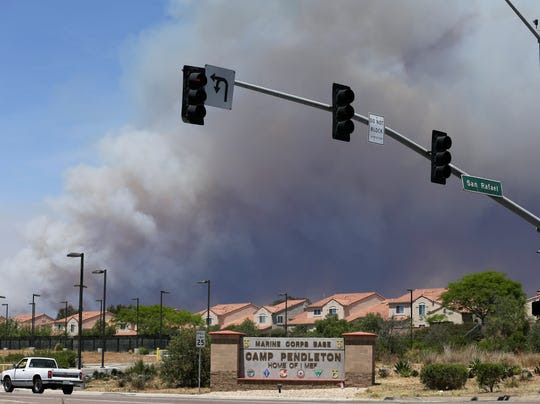 Tens of thousands of evacuees returned home this weekend after devastating wildfires scorched the San Diego area, but it may be only a temporary respite for drought-stricken California.
Since May 13, at least 10 fires spreading over 39 square miles have blazed through San Diego County, destroying 10 houses, an 18-unit apartment complex and two businesses. A badly burned body was found in a transient camp, and a firefighter suffered heat exhaustion.
Government officials are wary that the extremely dry conditions, high temperatures and low humidity could result in many more fires this summer.
The California Department of Forestry and Fire Protection has already responded to more than 1,500 fires this year, compared with about 800 during an average year.
In 119 years of recorded history, 2013 was the driest calendar year for California, the U.S. Geological Survey says.
According to the U.S. Department of Agriculture, the ongoing drought will "likely" have a major impact on agricultural production this year for a state that is a major producer of the nation's fruits, vegetables, tree nuts and dairy products.
With insufficient water and higher production costs, food producers "may opt to reduce total acreage," driving up consumer food prices for several years, the Agriculture Department says.
Much of California's farmland receives water from snowfall in the Sierra Nevada Mountains. As of April 1, the California Department of Water Resources measured the statewide water content of snowpack at only 32% of the average snowpack on April 1.
That date, the U.S. Geological Survey says, is usually when the snowpack is at its peak and begins to melt into streams and reservoirs.
Contributing: The Associated Press
Posted by firesprinklers at 10:02 AM