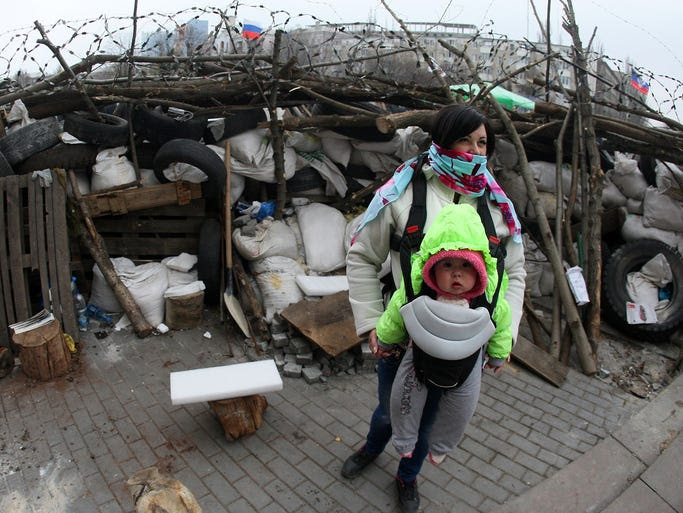 DONETSK, Ukraine – Pro-Russian separatists refused Thursday to surrender control of government offices in eastern Ukraine cities despite a deadline to do so as Russia maintained high levels of military on the border and threatened to shut gas deliveries to Europe.
NATO made public to reporters satellite photographs that showed Russia has not removed any of the 40,000 troops near the Ukrainian frontier it said it would reduce, and that those forces are now sharing space with lines of tanks, armored vehicles, artillery and aircraft.
"This is a force that is very capable, at high readiness, and, as we have illustrated through the imagery, is close to routes and lines of communication," British Brigadier Gary Deakin said at a briefing at the the Belgium military headquarters for the European-U.S. defense alliance.
"It has the resources to be able to move quickly into Ukraine if it was ordered to do so," he said of the Russian forces stationed at more than 100 sites near the Ukraine border.
NATO General Secretary Anders Fogh Rasmussen said during a visit to the Czech Republic on Thursday that Russian troops are "not training, but ready for combat."
Fearful of a Russian reaction should the government crack down on separatists, Ukrainians said they do not want eastern Ukraine to go the way of Crimea, which was annexed by Russian President Vladimir Putin after similar pro-Moscow protests.
Ukraine's central government gave separatists in Donetsk and Luhansk until Friday to vacate the buildings or the authorities would do so by force. Ukraine's acting president Olexander Turchynov said Thursday the occupiers would not be prosecuted if they leave the buildings and give up their weapons.
In a letter released Thursday by the Kremlin, Putin warned European leaders that Ukraine's gas debt is forcing Moscow to start demanding advance payments for Russian gas. He warned that if Ukraine fails to make such payments, Russia's state-controlled gas giant Gazprom will "completely or partially cease gas deliveries."
Putin told the leaders that a possible shutdown of Russian gas supplies will increase the risk of Ukraine siphoning off gas that is intended for Europe.
"The Ukrainian government is certainly afraid of that (the escalation of the crisis)," said Susan Stewart, deputy head of the Eastern Europe and Eurasia Research Division at the German Institute for International and Security Affairs (SWP).
"If they (the Ukrainian forces) are in there and they need to use violence then … the Russian side could use that to present it as these people's rights being violated and they were not being allowed to protest. It is something that the Ukrainian side really wants to avoid," she said.
Though nearly half of eastern Ukraine residents are ethnic Russians, not everyone wants Moscow forces to move in and take over as the protesters do.
"I see my region only as part of Ukraine," said Vladimir Ivaschenko in the eastern city of Donetsk. "I was born in 1990 that's why I have identified myself as a Ukrainian citizen all my life. ... I don't welcome Russia and Putin's regime."
Yuriy Ivanov, 49, from the eastern Ukraine city of Dzerzhinsk, says some want to join Russia, "but not me."
"I don't know how people in Russia live. What if in Russia my pension is taken away? I cannot know exactly."
Alexander Ryabchenko, 25, was among those who protested in Donetsk for a Russian takeover.
"Vladimir Putin said he is ready to help everyone who requests it," he said. "I am here on the barricades because I am fed. Earlier here there was little action, but now people are self-organized and I support them with everything I can."
Contributing: Luigi Serenelli reported from Berlin
Posted by firesprinklers at 2:56 PM