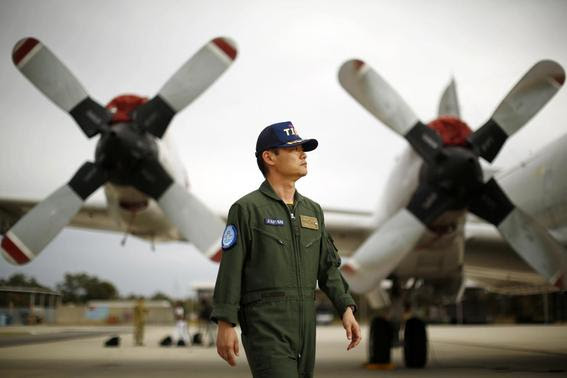 1 OF 7. Japan's Maritime Self-Defence Force Commander Hidetsugu Iwamasa is pictured in front of one of their P-3C Orion aircraft currently at RAAF Base Pearce near Perth, April 4, 2014. On Monday it will be 30 days since the Malaysia Airlines flight MH370 lost communications and disappeared from civilian radar less than an hour into an overnight flight from Kuala Lumpur to Beijing on March 8.
CREDIT: REUTERS/JASON REED

(Reuters) - Four weeks after the disappearance of a Malaysia Airlines jetliner, searchers on Saturday launched the most intensive hunt yet in the southern Indian Ocean, trying to find the plane's black box recorders before their batteries run out.
Up to 10 military planes, three civilian jets and 11 ships will scour a 217,000-sq-km (88,000-sq-mile) patch of desolate ocean some 1,700 km (1,060 miles) northwest of Perth near where investigators believe the plane went down on March 8 with the loss of all 239 people on board.
"If we haven't found anything in six weeks we will continue because there are a lot of things in the aircraft that will float," Retired Air Chief Marshal Angus Houston, the head of the Australian agency coordinating the operation, told reporters.
"Eventually I think something will be found that will help us narrow the search area."
Authorities have not ruled out mechanical problems as a cause but say the evidence, including the loss of communications, suggests Flight MH370 was deliberately diverted thousands of kilometers from its scheduled route from Kuala Lumpur to Beijing.
Dozens of flights by a multinational taskforce have so far failed to turn up any trace of the plane, and investigators concede the task has been made more difficult by the lack of data.
The Boeing 777 was briefly picked up on military radar on the other side of Malaysia and analysis of subsequent hourly electronic "handshakes" exchanged with a satellite led investigators to conclude the plane crashed far off the west Australian coast hours later.
SONAR SEARCH
Sonar equipment on two ships joining the search may help find the plane's black box voice and data recorders that are key to unlocking what happened on the flight. The black box is equipped with a locator beacon that transmits "pings" when underwater, but its batteries may only last 30 days.
Australian authorities said the so-called Towed Pinger Locator will be pulled behind navy ship HMAS Ocean Shield, searching a converging course on a 240-km (150-mile) track with British hydrographic survey ship HMS Echo.
Experts have warned the Towed Pinger Locator may be of little use unless investigators can get a much better idea of exactly where the plane went into the water, because its limited range and the slow speed at which it must be pulled behind the ship mean it cannot cover large areas of ocean quickly.
"I won't even call it an area. What we are doing is we are tracking down the best estimate of the course that the aircraft was on," U.S. Navy Captain Mark Matthews told Reuters. "It takes a couple of days on each leg so its a slow-going search."
Britain is also sending HMS Tireless, a Trafalgar-class nuclear submarine with sonar capabilities, and a Malaysian frigate was due to arrive in the search area on Saturday.
Malaysian Prime Minister Najib Razak and his Australian counterpart, Tony Abbott, this week toured RAAF Base Pearce, near Perth, from where aircrews seven countries have been operating.
"The world expects us to do our level best, and I'm very confident we will indeed show what we can do together as a group of nations; that we want to find answers, that we want to provide comfort to the families and we will not rest until answers are indeed found," Najib said.
Malaysian authorities have faced heavy criticism, particularly from China, for mismanaging the search and holding back information. Most of the 227 passengers were Chinese.
(Additional reporting by Niluksi Koswanage in KUALA LUMPUR and Jane Wardell in SYDNEY; Writing by Lincoln Feast; Editing by Nick Macfie)

Posted by firesprinklers at 9:03 PM