In 5-4 Ruling, Majority Says Such Caps Violate the First Amendment

The Supreme Court struck down aggregate limits on political contributions, saying such rules violate the First Amendment. WSJ's Colleen McCain Nelson reports on Lunch Break. Photo: Getty
WASHINGTON—The Supreme Court struck down caps on aggregate political contributions Wednesday, the latest in a string of decisions rolling back campaign finance regulations that the court's majority conservative justices believe infringe on First Amendment rights.
The 5-4 ruling threw out the limits, currently $123,200, on what any individual can give to federal candidates over a two-year election cycle. The plurality opinion, by Chief JusticeJohn Roberts, said those caps infringe on free-speech rights and aren't justified by the public interest in fighting political corruption. 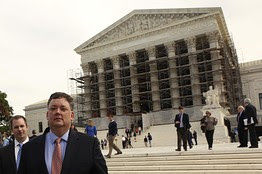 The case was brought by Alabama businessman Shaun McCutcheon, pictured here leaving the Supreme Court in October 2013 after the justices heard oral arguments in the case. Reuters
Still, the court left intact the limits on the amount an individual can give to specific candidates and political committees, currently $5,200 to a candidate for the primary and general elections, with higher limits to political committees. Chief Justice Roberts wrote that Congress's interest in fighting corruption doesn't justify the burden on political speech posed by aggregate limits.

While "Congress may regulate campaign contributions to protect against corruption" or its appearance, it "may not regulate contributions simply to reduce the amount of money in politics" or, as some put it, to level the playing field between wealthy forces and those of lesser means, Chief Justice Roberts wrote.
Political spending is a form of free speech, he said, and therefore any restriction of it must pass the highest constitutional scrutiny to survive. While many Americans "would be delighted to see fewer television commercials touting a candidate's accomplishments or disparaging an opponent's character" that can't justify restricting what an individual can spend to promote his or her political views, the chief justice wrote. 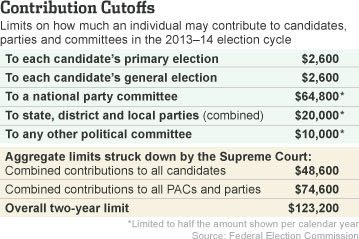 "If the First Amendment protects flag burning, funeral protests, and Nazi parades—despite the profound offense such spectacles cause—it surely protects political campaign speech despite popular opposition," Chief Justice Roberts wrote, joined by Justices Antonin Scalia,Anthony Kennedy and Samuel Alito.
The case was brought by Alabama businessman Shaun McCutcheon, who wanted to give more than the aggregate cap to Republican candidates and political committees. The Republican National Committee backed him, while Democratic groups and activists lined up on the other side, arguing the campaign regulation, which traces to the post-Watergate overhauls of the 1970s, was valid.

Justice Stephen Breyer read his dissent from the bench, signifying significant disagreement from the court's liberal wing. He said that the aggregate cap fights corruption by making it harder to circumvent the limits on contributions to individual candidates.
Justice Clarence Thomas voted with the majority, but wrote separately to say the chief justice's opinion didn't go far enough; he would strike down all restrictions on political contributions, to individual candidates as well as the aggregate cap at issue in Wednesday's case.
The decision, though long in coming since the oral arguments in October, was widely expected. Under Chief Justice Roberts, the court's conservative majority has issued a series of rulings striking down various campaign finance regulations for violating free-speech protections. Just as predictably, the four-justice liberal minority has pointedly dissented, suggesting that should the left gain a majority on the court, recent years' rulings rolling back campaign finance regulations might themselves be overruled.
For instance, in the 2010 case known as Citizens United, the justices voted 5-4 to invalidate limits on corporate and union political spending. The decision led to a rare spat between the executive and judicial branches, when President Barack Obama criticized the ruling during his State of the Union address, prompting visible irritation from Justice Alito, a member of the court majority then in the audience. Justice Alito has avoided the president's annual address ever since.
Write to Jess Bravin at jess.bravin@wsj.com
Posted by firesprinklers at 11:58 AM