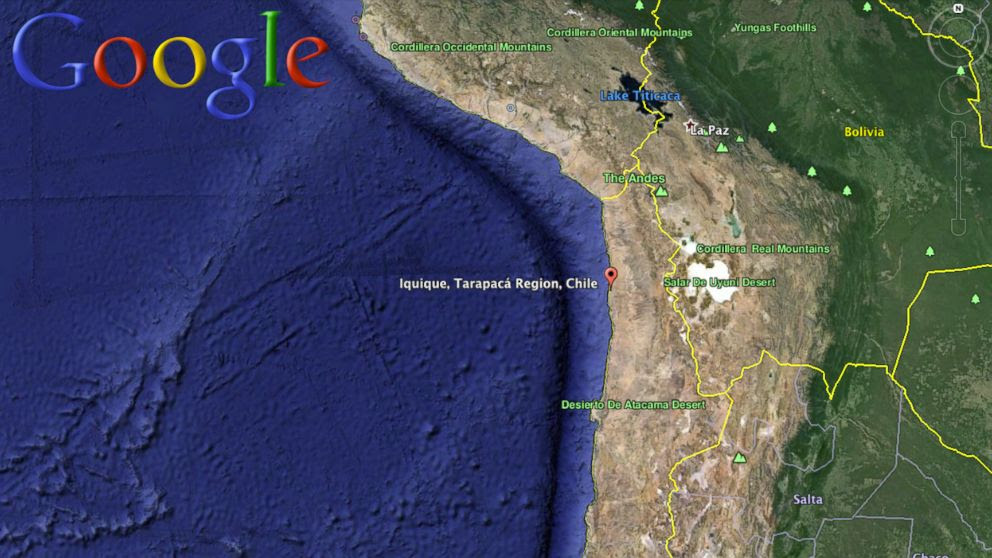 A map of the Pacific coast of Chile, where an earthquake was reported on April 1, 2014.
Google
An earthquake with a preliminary magnitude of 8.0 has struck off the coast of Chile, according to the U.S. Geological Survey.
A tsunami warning was issued following the quake, which was centered 49 miles west-northwest of Iquique, Chile, and was 6.21 miles deep, the USGS said.
The Pacific Tsunami Warning Center said a 6-foot tsunami that hit Pisagua, Chile, at 8:04 p.m. ET. No damage assessment has been made at this time.
ABC News producer Helen Hughes in Santiago, Chile, said there is a tsunami alert for all of Chile, Peru and Ecuador. Evacuation orders have been issued for the cities of Arica, Iquique and Antofagasta. All cities are along a low coast, and each has a significant climb to higher land further inland, Hughes said.
There have been numerous quakes in the same area over the past few weeks, but scientists have said it is not clear whether they were a sign that a major quake was coming.
A magnitude-6.7 quake rattled the area on March 16, and more than 100,000 people were briefly evacuated from low-lying areas. No tsunami resulted from that quake, which caused little damage.
In 2010, a magnitude-8.8 quake and ensuing tsunami in central Chile killed more than 500 people, destroyed 220,000 homes, and caused widespread damage to docks, riverfronts and seaside resorts.
The strongest earthquake ever recorded also happened in Chile, in 1960. The magnitude-9.5 tremor that killed more than 5,000 people.
The Associated Press contributed to this report.
Posted by firesprinklers at 6:06 PM