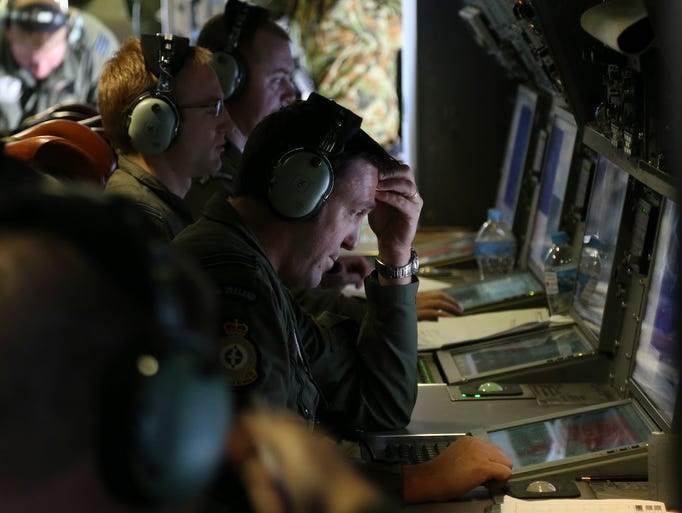 A potential new clue to the whereabouts of missing Malaysia Airlines Flight 370 emerged Saturday, with a Chinese patrol ship detecting a pulse signal coming from the search area, according to reports from China's official news agency, Xinhua.
A "black box detector" deployed by Chinese ship Haixun 01 "detected a pulse signal" in southern Indian Ocean waters, Xinhua said late Saturday local time. The signal was picked up around 25 degrees south latitude and 101 degrees east longitude.
Also on Saturday, Xinhua reported a Chinese air force plane spotted a number of white floating objects in the search area, which is northwest of the Australian city of Perth.
The Australian government agency coordinating the search said that those reports, as well as any connection between the pings and the missing plane, could not be immediately verified.
"I have been advised that a series of sounds have been detected by a Chinese ship in the search area. The characteristics reported are consistent with the aircraft black box," said Air Chief Marshal Angus Houston, the chief coordinator of the Joint Agency Coordination Centre, in an e-mailed statement. "A number of white objects were also sighted on the surface about 90 kilometers (56 miles) from the detection area. However, there is no confirmation at this stage that the signals and the objects are related to the missing aircraft."
Search organizers may send Royal Australian Air Force assets to the area where the Chinese ship detected the sounds, he said. That move "is being considered," according to Houston's statement.
Malaysia Airlines' Beijing-bound Flight 370, with 239 people aboard, lost communication with civilian air controllers soon after it took off early March 8 from Kuala Lumpur International Airport. No emergency signals or distress messages were received before the plane vanished from radar.
As the search for the missing plane reaches nearly one month with no results, Malaysian Defense Minister Hishammuddin Hussein on Saturday announced the creation of a new multinational investigation team, and said the hunt would continue with "vigor and intensity."
"The search operation has been difficult, challenging and complex," Hussein said in a press briefing. "In spite of all this, our determination remains undiminished."
Malaysia will continue to lead the investigation, yet an independent "investigator in charge" will be appointed to head a new investigation team, he said.
That multinational team will examine three main areas related to the missing jetliner. It will look at airworthiness, including maintenance, structures and systems; operations, such as flight recorders and meteorology; and medical and human factors such as "psychology, pathology and survival factors," he said.
The team will include representatives from Australia, as well as China, the United States, Britain and France, Hussein said.
Hussein also announced three new committees. A "next of kin committee" will provide families of passengers with information on the search operation and provide support after the search operation concludes, he said. Another committee will oversee the formation of the new investigation team. A third committee will work with other countries, such as Australia, on the deployment of assets for the search operation.
On Saturday, up to 10 military planes, three civilian jets and 11 ships assisted in the hunt for the plane, according to the Joint Agency Coordination Centre. The overall search area is an 84,000-square-mile zone in the southern Indian Ocean.
Military and civilian planes, ships with deep-sea searching equipment, and a British nuclear submarine scoured the waters for debris as well as any other clues that could lead to the recovery of the plane and its flight and voice recorders.
One big issue as time goes on: The sound-emitting beacons in the recorders could fall silent as their batteries die after sounding electronic "pings" after about a month.
Two ships, the Australian navy's Ocean Shield and the British HMS Echo, carrying sophisticated equipment that can hear the recorders' pings returned Saturday to a search areawhere investigators hope is close to where the plane went down.
Posted by firesprinklers at 12:08 PM