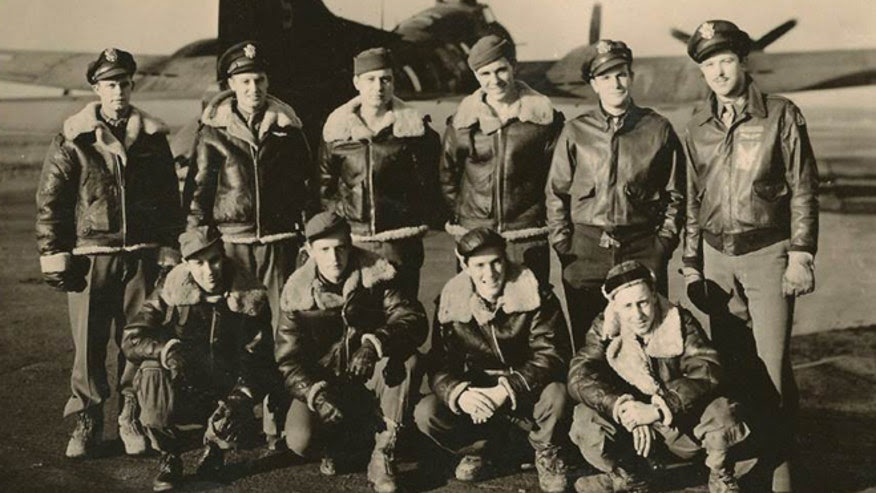 The Air Force approved the medals following tireless, 15-year fight of one the imprisoned aviator's grandsons: Army Maj. Dwight Mears, an assistant professor of history at West Point, Iraq war veteran and the grandson of Lt. George Mears, upper left. (Courtesy: The Mears Family)
It's recognition more than 70 years in the making.
Eight U.S. service members shot down and captured while fighting Hitler’s Nazi regime finally received long overdue Prisoner of War medals during a ceremony Wednesday at the Pentagon. For decades, the airmen were denied POW status, even though they were crashed over Germany and later held in a prison camp in Wauwilermoos, Switzerland. But after one of the airmen's grandson fought a 15-year battle to show what they had gone through, including the daring escapes that allowed them to get back to the fight, the Pentagon reversed course.
USAF Chief of Staff Gen. Mark Welsh III presented the medals to seven of the veterans and one of their grandsons during the ceremony. Air Force Secretary Deborah Lee authorized the awarding of the medal to 143 USAAF airmen earlier this month following a change in criteria. Army Air Corps First Lieutenant James Mahon, 91, is among those to be honored, some 70 years after his imprisonment after he and the rest of his B-17 crew were captured.
"It’s the kind of courage we read about in books, that people make movies about," Welsh said of the valor shown by the airmen. "But make no mistake about it, these men have that type of courage … and boy, did these guys saddle up.”

"It’s the kind of courage we read about in books, that people make movies about."
- Air Force Chief of Staff Gen. Mark Welsh III

Mahon, a longtime New Jersey resident who now lives in a New Hampshire nursing home, told the Courier-Post he was thrilled about the news earlier this month.
“Great! We were happy to be alive so we could home,” Mahon told the newspaper.
Mahon said he would be accompanied to Wednesday’s ceremony with his son, Patrick, who saw his father’s decades-long fight with the Department of Defense denied because of Switzerland’s neutrality.
“The only difference between this camp and the German prison camps was that this one was easier to escape from,” Patrick Mahon told the newspaper.
The elder Mahon was a bombardier and a navigator when his plane crash-landed during a mission of the 429th Squadron, Second Bombardment Group from Italy to Germany. Mahon, according to military reports, made two attempts to escape Switzerland but was caught and imprisoned. On Dec. 29, 1944, Mahon, using a forged pass, escaped again and managed to reach Zurich, where he contacted American consul officials. He was later escorted to the French border by a guide who then traveled with to Italy in early 1945.
Lt. Col. Maureen Schumann, an Air Force spokeswoman at the Pentagon, has said Mahon and other Swiss prisoners did not meet the criteria for the POW Medal until last year when Congress approved the National Defense Authorization Act, which revised the U.S. law on POW first created in 1985.
The Air Force approved the medals following tireless, 15-year fight of one the imprisoned aviator's grandsons: Army Maj. Dwight Mears, an assistant professor of history at West Point, Iraq war veteran and the grandson of Lt. George Mears.
Fox News' Jennifer Griffin, Nick Kalman, Anne Marie Riha and Joshua Rhett Miller contributed to this report.

Posted by firesprinklers at 8:15 AM