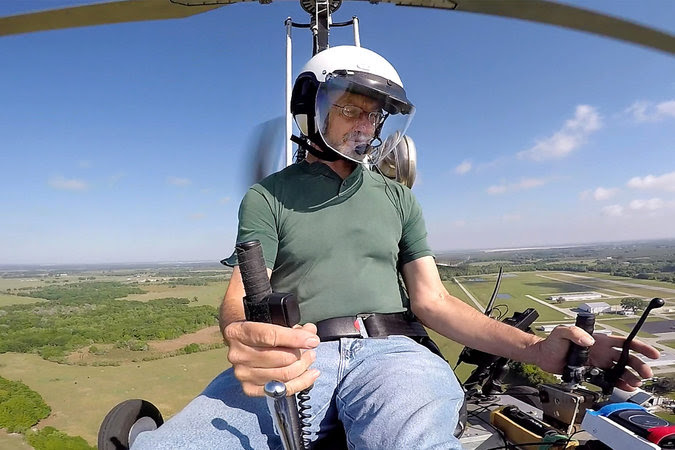 
WASHINGTON — Some prominent lawmakers raised questions on Thursday about how the pilot of a gyrocopter, eager to deliver a protest message to Congress over campaign finance laws, was able to fly the aircraft apparently undetected through protected airspace and land near the Capitol.
Doug Hughes, 61, a postal worker from Florida had announced his plans on his website before landing the lightweight hobby aircraft on Wednesday. The Capitol Police promptly took Mr. Hughes into custody without incident. On Thursday he was charged with violating national airspace and operating an unregistered aircraft.
Some lawmakers said the security breach left them wondering whether someone with malicious intent could use similar tactics — perhaps using another kind of lightweight aircraft or drone — to wage an attack on the Capitol Building.
Continue reading the main story
“I think there’s absolutely a gap and it’s a very dangerous gap, with regard to our airspace, and I think we have to fill that gap sooner rather than later,” said Representative Elijah Cummings of Maryland, the top Democrat on the House Oversight Committee. “Suppose there was a bomb or an explosive device on that air vehicle. That could have been a major catastrophe.”
However, despite the concern on Capitol Hill, there were signs that not everyone regarded the episode as serious. The House Oversight Committee said it was not planning any hearings on the incident, and some law enforcement officials warned against overreacting.
“It’s certainly a concern, but unless you build an invisible dog fence around every capital building that will destroy an object that gets close, you just can’t keep these kinds of things from happening,” said Jon Adler, president of the Federal Law Enforcement Officers Association, which represents more than 25,000 federal officers. “We don’t want to turn our country into a fortified dungeon.”
Some members of Congress even seemed to make light of the incident, offering shrugged shoulders and eye rolls.
Asked about the aircraft, Senator John Cornyn of Texas, the No. 2 Republican, said: “I want to know where I can get one.”
But Senator Lindsey Graham, Republican of South Carolina and a possible 2016 presidential candidate, was more forceful. “Post-9/11, I find it astonishing that it was able to penetrate the Capitol airspace. Somebody should be fired,” Mr. Graham said. “I think we should find out how that happened. We’re at war. This is an example of how we’re letting our guard down.”
In a statement, Representatives Candice Miller, Republican of Michigan and chairwoman of the committee that oversees House operations, and Robert Brady of Pennsylvania, the ranking Democrat on the committee, said, “This cannot happen again.”
The Secret Service interviewed Mr. Hughes in 2013, but the agency’s director told Mr. Cummings on Thursday that the agency did not believe Mr. Hughes was a threat. (Before he took off, Mr. Hughes wrote on his website that he had “no violent inclinations or intent.”) But it remained unclear if the Secret Service had notified the Capitol Police to Mr. Hughes’s possible plans, which he had shared with The Tampa Bay Times.
The Secret Service did not return repeated requests for comment. The Capitol Police said it would not comment because its investigation had not been completed.
The federal government controls about a third of the land in Washington, and more than a dozen federal law enforcement agencies have some jurisdiction in the city. Much of the space they patrol, like the Capitol lawn, is public space.
The landing on the Capitol lawn follows similar incidents of small, man-made objects crashing near the White House and Capitol buildings in recent months.
In January, an inebriated off-duty employee for a government intelligence agency crashed a drone on the south grounds of the White House. Last July, the Secret Service detained an individual operating a quadcopter in President’s Park, just a block from the South Lawn of the White House, according to a report filed with the Federal Aviation Administration. Another person was detained by the Capitol Police for flying a drone on the Capitol Hill grounds.
The Department of Homeland Security declined to comment on the gyrocopter landing, but Jeh Johnson, the department secretary, told The Associated Press that the aircraft went unnoticed because it had flown “below the radar.”
Michael Kucharek, a spokesman for the North American Aerospace Defense Command, known as Norad, said his agency and others have had trouble tracking small slow-moving aircraft like the gyrocopter.
“There are some technical challenges with differentiating it from weather events, terrain or even birds,” Mr. Kucharek said. “Until this investigation — that is ongoing — concludes, we are probably not going to know more.”
Norad works with the Capitol Police, the Secret Service, the Federal Aviation Administration and other agencies to track aircraft approaching the restricted airspace of the National Capital Region. The F.A.A., which declined to comment, has control over the airspace, but Norad is charged with protecting it from threats.
Mr. Kucharek said there were ground-based defense systems and military and civilian aircraft that could be used to defend against airborne attacks. He did not say why those defenses were not used in the case of the gyrocopter.


Posted by firesprinklers at 7:07 PM