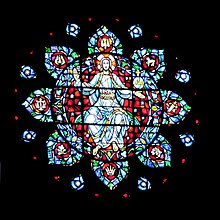 From Wikipedia, the free encyclopedia

The rose window above the altar at Boston University's Marsh Chapel
The Marsh Chapel Experiment, also called the "Good Friday   Experiment," was a 1962 experiment conducted on Good Friday at Boston University's Marsh Chapel. Walter N. Pahnke, a graduate student in theology at Harvard Divinity School, designed the experiment under the supervision of Timothy Leary and the Harvard Psilocybin Project.[1] Pahnke's experiment investigated whether psilocybin (the active principle in psilocybin mushrooms) would act as a reliable entheogen in religiously predisposed subjects.[2]

Prior to the Good Friday service, graduate degree divinity student volunteers from the Boston area were randomly divided into two groups. In a double-blind experiment, half of the students received psilocybin, while a control group received a large dose of niacin. Niacin produces clear physiological changes and thus was used as an active placebo. In at least some cases, those who received the niacin initially believed they had received the psychoactive drug.[3]:5
However, the feeling of face flushing (turning red, feeling hot and tingly) produced by niacin subsided over the first hour or so. Meanwhile, the effects of the psilocybin intensified over the first few hours. Almost all of the members of the experimental group reported experiencing profound religious experiences, providing empirical support for the notion that psychedelic drugs can facilitate religious experiences. One of the participants in the experiment was religious scholar Huston Smith, who would become an author of several textbooks on comparative religion. He later described his experience as "the most powerful cosmic homecoming I have ever experienced."[4]

In a 25-year follow-up to the experiment, all of the subjects given psilocybin described their experience as having elements of "a genuine mystical nature and characterized it as one of the high points of their spiritual life".[3]:13 Psychedelic researcher Rick Doblin considered Pahnke's original study partially flawed due to incorrect implementation of the double-blind procedure, and several imprecise questions in the mystical experience questionnaire. Nevertheless, Doblin said that Pahnke's study cast "a considerable doubt on the assertion that mystical experiences catalyzed by drugs are in any way inferior to non-drug mystical experiences in both their immediate content and long-term effects".[3]:24 A similar sentiment was expressed by clinical psychologist William A. Richards, who in 2007 stated "[psychedelic] mushroom use may constitute one technology for evoking revelatory experiences that are similar, if not identical, to those that occur through so-called spontaneous alterations of brain chemistry."[5]

In 2002 (published in 2006), a more rigorously controlled version of this experiment was conducted at Johns Hopkins University by Roland R. Griffiths, yielding similar results.[6] In a 14-month follow-up to this study, over half of the participants rated the experience among the top five most meaningful spiritual experiences in their lives, and considered the experience to have increased their personal well-being and life satisfaction.[7]

Posted by firesprinklers at 7:34 PM