lorida mail carrier created a stir at the U.S. Capitol by flying a gyrocopter into Washington, D.C., and landing it just outside the building Wednesday, police said. The move was an apparent protest demanding campaign finance reform.
Despite the no-fly zone, the tiny aircraft came in low over the National Mall, whizzing past a row of trees and a statue of Ulysses S. Grant, as a group of onlookers stood by. Both houses of Congress were in session at the time.
Capitol Police said they detained Douglas Hughes of Ruskin, Fla., after he landed the craft on the West Lawn of the Capitol about 1:30 p.m. He has been moved to a cellblock, and charges against him are pending, they said.
Secret Service supervisor placed on leave after 'misconduct' allegations
The pilot was the only one on board the gyrocopter, said Shennell Antrobus, a police spokesman. A bomb squad found nothing hazardous on the craft, so it was moved to a "secure location," police said.
Hughes claimed responsibility for the stunt on a website dedicated to what he called an act of civil disobedience. According to the site, Hughes aimed to personally deliver 535 letters by "air mail" to members of Congress. "The unending chase for money I believe threatens to steal our democracy itself," Hughes writes in a letter, posted by the Tampa Bay Times. "I'm demanding reform and declaring a voter's rebellion."
lRelated 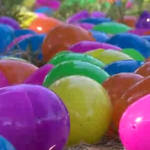 SEE ALL RELATED
8
Hughes said he was aware of the risk of being shot down as he approached the Capitol. "There is no way I can prevent overreaction by the authorities," Hughes wrote, "but I have given them as much information and advance warning as my fuel supply allows." Hughes added that before taking off, he had sent an email to President Obama to try to convince authorities that "I am not a threat and that shooting me down would be a bigger headache than letting me deliver these letters."
He took off more than an hour away from the no-fly zone over Washington, he wrote.
In 2013, Hughes was visited by Secret Service agents, Brian Leary, a spokesman for the Secret Service, said in an email.
A gyrocopter landed just outside the U.S. Capitol with one person inside.
(Paul J. Richards / AFP/Getty Images)
"On October 4, 2013, the Secret Service obtained information from a concerned citizen about an individual purporting their desire to land a single manned aircraft on the grounds of the United States Capitol or the White House," Leary said in an email. "That same day, the information was reported to law enforcement partners at the U.S. Capitol Police."
Leary said the individual, whom he did not identify, was located and interviewed the following day in Ruskin.
The Secret Service had no prior warning Wednesday about the pilot's plans, Leary said.
About an hour before the aircraft landed at the Capitol on Wednesday afternoon, the Tampa Bay Times published a story about Hughes, who had told the paper he planned to fly to Congress in his gyrocopter.
cComments ADD A COMMENTSEE ALL COMMENTS
34
“If you’re reading this, Doug Hughes, a 61-year-old mailman from Ruskin, has taken flight,” said the Tampa Bay Times story, which was published at 12:11 p.m. local time. Hughes’ goal was to personally deliver a message to Congress to draw attention to the issue of campaign finance reform, the report said.
In a statement released after Hughes landed, the Tampa Bay Times told CNN that Hughes had contacted reporter Ben Montgomery last summer and discussed his plans to fly to the Capitol. The newspaper confirmed with Hughes and a coworker that they had both been interviewed by the Secret Service at work.
In preparation for the mailman's attempt, the Times sent Montgomery and a photographer to Washington. Montgomery tweeted photos of the aircraft, which appeared to hover over the heads of unsuspecting pedestrians.
Shortly after Hughes' streaming of the flight went live, the newspaper published the story, it said. About an hour later, the paper called Capitol Police and the Secret Service to ask whether they were aware of Hughes' flight; they said they were not. The gyrocopter landed a half hour later.
According to the website, which is registered to a Douglas Hughes of Ruskin, Fla., Hughes is married, has four children and has been flying gyrocopters for more than a year.
He grew up in Santa Cruz and lives with his wife and 11-year-old daughter, he wrote.
In a statement, the Federal Aviation Administration said the pilot did not have authorization to fly there and had not contacted FAA air-traffic controllers to inform them of his flight. "Airspace security rules that cover the Capitol and the District of Columbia prohibit private aircraft flights without prior coordination and permission," the statement said.
The pilot could face civil and criminal penalties for flying near the Capitol, which is considered part of a national defense airspace. The FAA said it was working with aviation security partners in Washington to investigate the incident.
A White House spokesman said that Obama, who was attending a town hall event in Charlotte, N.C., had been briefed on the incident.
The U.S. Postal Service confirmed that Hughes is employed as a rural letter carrier. The agency's Office of Inspector General is "in contact" with postal management about the incident, a Postal Service representative said in an email.
Times staff writer Ryan Parker contributed to this report.
For more breaking news, follow me @cmaiduc.
Copyright © 2015, Los Angeles Times


Posted by firesprinklers at 11:02 PM