Prices Fall and Worry Escalates in the Eurozone 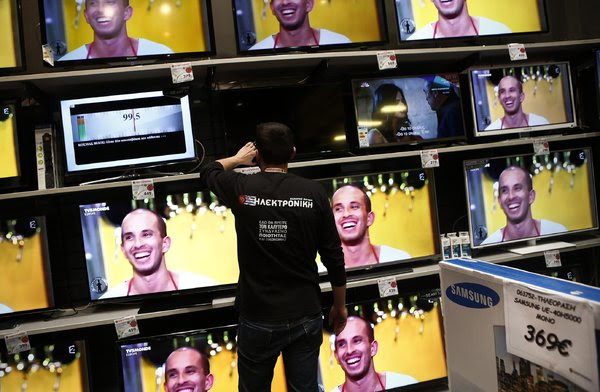 An electronics store in Athens. Deflation can cause consumers to delay purchases, as they await prices to fall further.CreditAlkis Konstantinidis/Reuters


Ireland on Wednesday was able to issue seven-year bonds at a yield of 0.867 percent, an astonishingly low rate for a country that was bailed out by the I.M.F. and the European Union in 2010.
Nicholas Spiro, managing director of Spiro Sovereign Strategy in London, wrote in a note on Wednesday that the contraction in consumer prices “is a severe blow to the credibility” of the European Central Bank.
“The E.C.B.’s hand has been forced,” he said. “Anything less than a firm pledge by its president, Mario Draghi, that sovereign quantitative easing is imminent will be taken very badly by markets."

Posted by firesprinklers at 5:01 PM