Charlie Hebdo’s New Issue Has Muhammad on the Cover 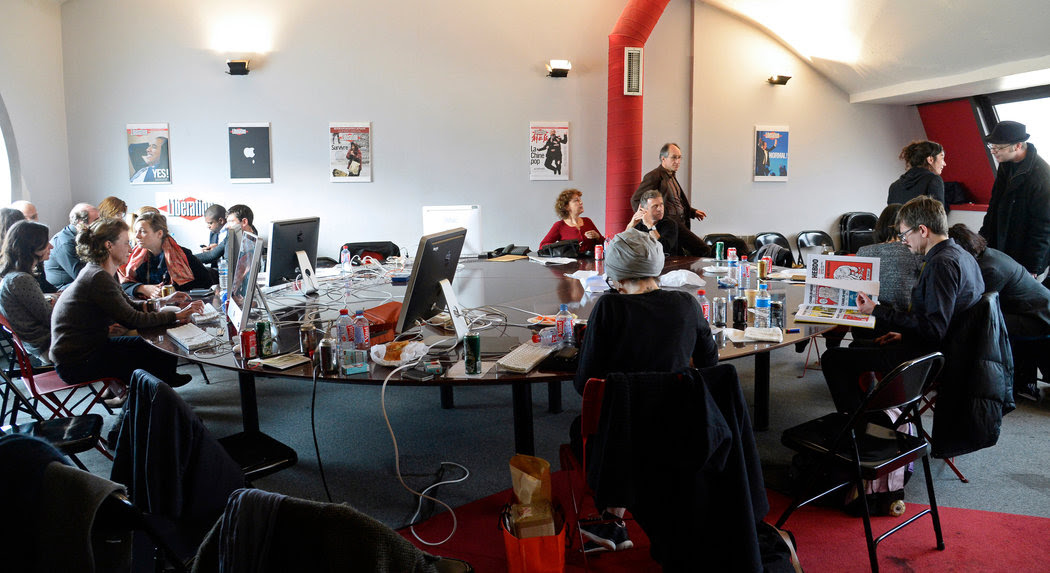 Employees of the French satirical newspaper Charlie Hebdo and the left-wing daily Libération worked at Libération offices on Saturday. CreditPool photo by Bertrand Guay
PARIS — At about 9:10 on Monday evening, laughter and a round of applause broke out among the surviving staff members of Charlie Hebdo, followed shortly by cries — joyous if ironic — of “Allahu akbar!”
The group was cheering Rénald Luzier, the cartoonist known as Luz, who on the umpteenth try had produced what the editors thought was the perfectcover image for the most anticipated issue ever of this scrappy, iconoclastic weekly, which will appear on Wednesday. It showed a figure of the prophet Muhammad holding a sign saying, “Je suis Charlie” (“I am Charlie”), with the words “All is forgiven” in French above it on a green background.
Continue reading the main story
“Habemus a front page,” Gérard Biard, one of the paper’s top editors, said with a smile, emerging from the staff’s makeshift newsroom and deploying the phrase used to announce a new pope. To find the right image, “We asked ourselves: ‘What do we want to say? What should we say? And in what way?’ ” Mr. Biard said. “About the subject, unfortunately, we had no doubt.”
Since Friday, just two days after gunmen had slaughtered 12 people at the paper, about 25 members of the staff had been huddled in the offices of the left-wing daily Libération, under heavy police protection, to work on the next issue. They were still in shock, and confounded to have suddenly become heroes of free speech to the same political and religious establishments they had long mocked.
As the journalists wrestled with grief, there were flashes of mordant humor. Cartoonists sketched while describing how hard it was to go on after the horror in their offices; others lashed out in anger at the killers. The main question looming over the moment: How could they possibly be funny at a time like this?
“We don’t know how to do anything but laugh,” said Mr. Biard, who was on vacation the day of the shootings.
Worldwide, the massacre has set off debates about security lapses, Islamic radicalism and turning points. Millions of supporters have embraced the slogan “I am Charlie.” But here, in a top-floor conference room with a stunning view of the Eiffel Tower, this was just a bunch of cartoonists and journalists: crying, snacking, laughing, breaking the rules against smoking indoors and trying to hold themselves together long enough to produce an issue.
Their first editorial meeting last Friday began not with article pitches but with remembrances for murdered colleagues, updates on the wounded and a surprise visit by Prime Minister Manuel Valls and Fleur Pellerin, the culture and communication minister — rare appearances at a newspaper more akin to The Onion than to Le Monde (and more likely to skewer those officials than interview them).
“We decided that we would do a normal edition, not a memorial issue,” Mr. Biard said on Friday, where an emotional three-hour staff meeting had just ended. Caterers brought in trays of smoked salmon, sandwiches and cream-filled desserts. A row of plainclothes police officers stood watch outside. Journalists hovered. Five desktop computers donated by Le Monde were set up on a round glass table. Since the attacks, financial donations have been pouring in to the financially troubled publication, and a fund has been set up, jaidecharlie.fr (“I help Charlie”).
As the newsroom sprang to life on Friday afternoon, Mr. Biard reflected. “They killed people who drew cartoon characters. That’s it. That’s all these guys do. If they’re afraid of that,” what’s their god?, he asked, inserting an expletive for emphasis.

Posted by firesprinklers at 3:55 PM