Microsoft Surface 4 vs. Apple iPad: 3 Key Things to Consider in 2015


By Leo Sun | More Articles
January 11, 2015 | Comments (2)
Last quarter, sales of Microsoft's (NASDAQ: MSFT  ) Surface Pro 3 climbed as sales ofApple's (NASDAQ: AAPL  ) iPad declined. A popular explanation for that surprising disparity was that the market for stand-alone tablets had become saturated, while the market for 2-in-1 devices hadn't.
Microsoft is expected to launch its line of "Surface 4" devices later this year. Recent rumors suggest that the new Surface will come in several sizes, ranging from 8 to 14 inches -- which would be both smaller and larger than the 10.6-inch Surface 2 and 12-inch Surface Pro 3. However, a smaller Surface could compete against the iPad Mini, cheaper Windows tablets, and Android devices, while a larger one could help Microsoft tackle Apple's long-rumored12.2-inch iPad Pro.

Microsoft's Surface Pro 3. Source: Microsoft
Looking ahead, can Microsoft grow its success with the Surface Pro 3 and continue claiming market share from Apple, which according to IDC, still accounts for 22.8% of all tablet shipments worldwide? Let's take a look at the three key factors which could decide its fate.
1. Mind the gapThe Surface's greatest strength is that it bridges the gap between PCs and tablets with Windows, which still runs on over 90% of the world's computers.
iPads and Android tablets can synchronize with PCs via dedicated mobile apps, but Windows tablets can do so within the same OS. This means that businesses can seamlessly upgrade their old PCs to Surface Pro devices (which can further be converted into full workstations via Docking Stations), while retaining their legacy software and data. That arguably makes Windows tablets a better incremental upgrade for large enterprises, which are frequently dependent on aging software. Within that market, a 14-inch Surface Pro should thrive as the screen size would be comparable to that of a regular laptop. 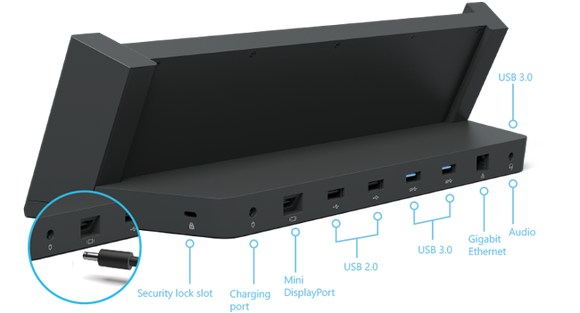 Surface Pro 3 Docking Station. Source: Microsoft
Moreover, if the Surface 4 launches at the same time as Windows 10 in the fall, the device could showcase Microsoft's "One Windows" plan -- which aims to unite phones, tablets, 2-in-1 devices, and PCs under a single operating system. If Microsoft keeps bundling free trials of Office 365 and One Drive (as it has in the past) with the new Surface and other Windows tablets, it could tether even more users to its cloud-based ecosystem.
2. Premium pricingThe Surface Pro might be an attractive replacement for an aging PC, but its high price tag is problematic. Depending on the hardware configuration, the Surface Pro 3 costs between $799 and $1,949. The Surface 2 is cheaper with a starting price of just $449, but it only runs on Windows RT, which isn't compatible with older x86-based software.
By comparison, Apple's iPad Air 2 costs between $499 and $829, while the MacBook Air costs between $899 and $1,199. Cheaper Windows 2-in-1 devices -- like Acer's Aspire Switch ($229) and Asus' Transformer Book T100TAM-H1 ($329) -- also offer similar "gap-bridging" advantages as the Surface Pro for only a fraction of the price.

Acer's Aspire Switch. Source: Acer
Granted, the top-tier Surface Pro 3 boasts an Intel i7 processor, 8GB RAM, and a 512GB SSD -- specs which crush the competition, but enterprise customers often simply need "good enough" devices to replace older PCs at a reasonable cost.
3. The 8-inch marketIf Microsoft launches a cheaper 8-inch Surface, it could steal the spotlight away from the flood of budget Windows tablets that hit the market during the holidays.
While this seems like a counterproductive move which could antagonize its hardware allies, it makes sense financially. Last April, Microsoft eliminated the license fees for Windows tablets and phones to grow its mobile market share and tether more users to its Office 365 and One Drive ecosystem.
The downside of that deal was that Microsoft no longer profited from sales of Windows tablets under 9 inches, which cost as little as $99. An 8-inch Surface would allow Microsoft to cash in on that fledgling market via hardware sales. A smaller Surface could also help Microsoft fill out the mid to higher-end of that market, since many 7 to 8-inch Windows tablets -- like Toshiba's Encore Mini and E FUN's Nextbook -- are equipped with low-end hardware.
With that in mind, the overall market for smaller tablets could continue to shrink due to the rise of "phablets" (5.5 to 7-inch phones). Sales of 7-inch and 8-inch tablets could slide from 55% of all tablet shipments in 2013 to 44.5% by 2018, according to IDC. Weak sales of the iPad Mini, cannibalized by the iPhone 6 Plus, highlight this growing trend.
The road aheadApple's iPads accounted for 12.6% of the company's revenue last quarter, compared to Microsoft's Surfaces, which only accounted for 3.9% of its top line. Yet sales of iPads have dropped year-over-year for three consecutive quarters, while Surface sales more than doubled, both year-over-year and sequentially, last quarter.
Microsoft clearly got something right with the Surface Pro 3, but we'll have to see if it can continue that streak with the Surface 4. Newer screen sizes might keep things fresh, but the device's premium pricing could throttle its growth among more budget-conscious consumers and businesses.
Posted by firesprinklers at 12:30 PM