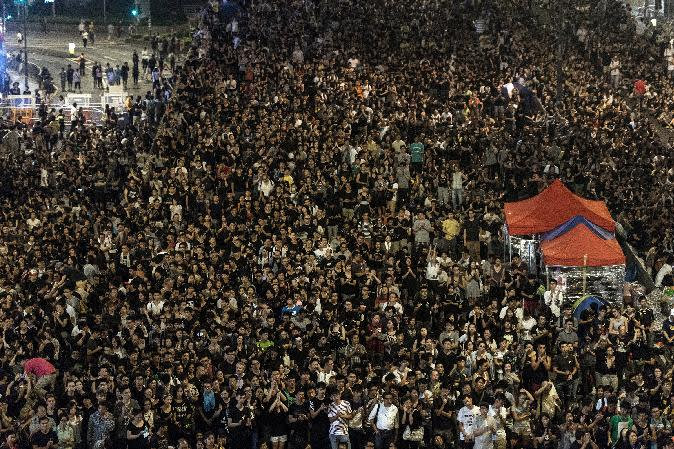 
Pro-democracy demonstrators stood divided over whether to withdraw from protest sites across Hong Kong Sunday, hours before a government deadline to clear key roads they have blockaded for the last week.

Embattled Chief Executive Leung Chun-ying has said his administration was determined to "take all necessary actions to restore social order" and pave the way for government staff to resume work by Monday morning.
Protest group Occupy Central said demonstrators would leave the secondary Mong Kok site on Sunday to reinforce the main rallying point near government offices across the harbour, and would also allow access to a blockaded road near the downtown headquarters in the Admiralty district.
But the announcement was not backed up by defiant student groups, the key force behind the week-long demonstrations.
Scholarism, led by 17-year-old activist Joshua Wong, and the Hong Kong Federation of Students both issued statements stating they had not told supporters to relocate to the main site.
"I am staying here to protect this area, I think that we have to do something," said Bosco Leung, a 21-year-old student who said he was angry at perceived police inaction against violence directed at protesters in Mong Kok. "We don't have a clear leader here."
Around 1,000 protesters remained in the shopping district on the Kowloon peninsula by 8:00 pm (1200 GMT), where protesters have faced off with police and anti-democracy agitators from the city's triad mobs over the weekend.
View gallery 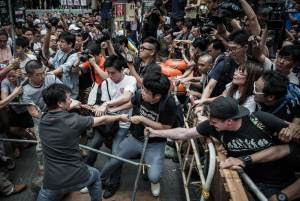 Pro-democracy protesters (R) protect a barricade from rival protest groups (L) in the Mongkok distri …
"There are people saying that we need to clear this area in Mong Kok and move to Admiralty, which some people think they're just saying to make us leave," Sophia Kwong, 21-year-old bookkeeping clerk told AFP.
The protesters are demanding the right to nominate who can run as Hong Kong's next leader in 2017 elections.
Sunday marked exactly a week since police fired tear gas on protesters in an effort to disperse them, but only adding sympathy to their cause and boosting numbers.
University staff made an impassioned plea earlier in the day for students to head home after Leung said his administration was determined to clear the streets.
"The most pressing task for the government is to reopen access to the CGO (Central Government Offices) on Monday so that some 3,000 CGO staff can return to their workplace and continue to provide services to the public," he said late Saturday.
Leung, who was voted into office by 689 people on a pro-Beijing committee numbering just 1,200 two years ago, issued an ominous warning if the protests are not ended.
View gallery 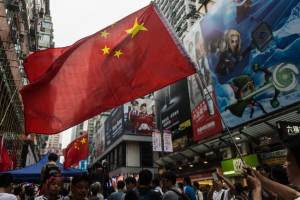 Pro-Beijing activists wave China's national flag as pro-Hong Kong government activists wearing b …
"The situation may probably evolve into a state beyond control, and will have serious consequences to public safety and social order," he said.
- 'I'm not going to leave' -
"I'm worried about the threat from CY, but I'm not going to leave because we are fighting for our values and genuine universal suffrage," Nixon Leung, a 22-year-old masters student, said in Admiralty, where a couple of thousand demonstrators remained barricaded in an area that has seen numbers ten times higher in the last week.
"We must continue our fight."
Ivan Ha, a psychology student, said: "I saw police transporting bags of supplies that looked like riot gear into government headquarters. But despite that, I'm going to stay until real dialogue happens, hopefully with CY."
China, which regained sovereignty over the city from Britain in 1997, insists only pre-approved candidates can stand and has repeatedly said the protests are doomed to fail.
View gallery 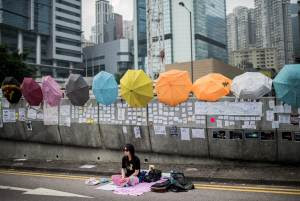 Pro-democracy protesters sleep on a blockaded road in Hong Kong on October 3, 2014 (AFP Photo/Alex O …
On the mainland, the ruling Communist Party mouthpiece the People's Daily newspaper said in an editorial Sunday that the international financial hub's image had been "ruined" as protests entered its eighth day.
- 'Door open to dialogue' -
Student leaders and the government have both said they were willing to enter talks aimed at ending the impasse but stressed certain conditions.
The government in a statement said "the door to dialogue is always open, if the (main student union) HKFS is willing", calling on them to help clear protesters from areas around Admiralty where its offices are.
HKFS, the Hong Kong Federation of Students, said allegations that police had failed to protect them from violence must be investigated before agreeing to talks.
The group's head, later Alex Chow, said that if police used rubber bullets they would have no choice but to retreat.
"There's no way to defend against that," he said.
Police Senior Superintendent Patrick Kwok defended the use of the pepper spray in overnight clashes on Sunday, while Financial Secretary John Tsang admitted the government had "no experience and psychological preparation" for the extent of the Occupy movement.
The number of injured people sent to hospitals since last Sunday rose to 165, the South China Morning Post said, citing health authorities.
While drawing many sympathisers, the protest campaign has also caused wide-scale disruption and taken a heavy toll on local businesses.
Small rallies by crowds sporting blue ribbons have been held by people who say they support the police and the government.
Posted by firesprinklers at 8:56 AM