STORY HIGHLIGHTS
Are you there? Share your images, but stay safe.
Hong Kong (CNN) -- After jarring clashes between pro-democracy protesters and opponents in Hong Kong's densely populated Mong Kok district Friday, student leaders called off talks with the government -- accusing police of allowing the violence to unfold.
"The path of conversation should be put aside now. The government is not honoring its promise and it should be held accountable first," the Hong Kong Federation of Students said in a statement.
Students had hoped to meet with the No. 2 official in Hong Kong's government, Chief Secretary Carrie Lam, in an effort to resolve the political crisis that has gripped the semi-autonomous Chinese territory for a week.
Pro-democracy activists accuse Beijing of exerting too much influence on Hong Kong and are demanding the right to directly choose candidates for elected office and other reforms.
But protest leader Edward Tsoi said that after some student protesters had been beaten and others sexually molested as police stood by and watched, protesters had lost all faith in government officials.
"The government and the police have done nothing to stop them," he told CNN.
Alex Chow, the secretary general of the student federation, said Friday's unrest was organized "with the intention to cause chaos to allow police to clear activists there." 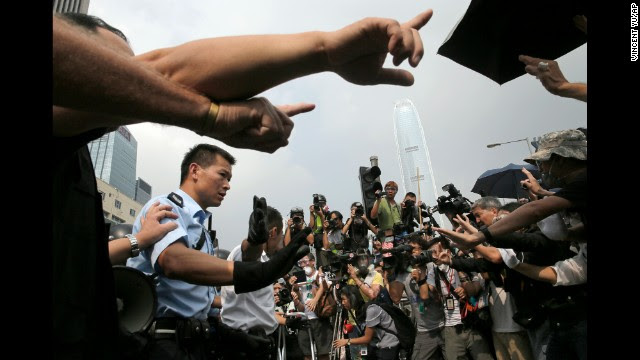 Map: Where protests are

Student protesters call on chief exec to go
A police spokesman rejected the protesters' claims, saying police had tried to fairly and neutrally manage a chaotic situation that got out of hand.
The official, Kong Man-keung, told reporters Friday that police were struggling to deal with a quickly developing situation and had done their best.
He reiterated requests for protesters to disperse, but protest leaders said they would do nothing of the sort.
"Now, the government is declaring that it will stand firm in clearing the occupied areas," the student federation said in its statement. "And we ask Hong Kong people to come and protest all these areas and we will fight to the end and we're not going to succumb."
'Our hands are shaking'
The clashes broke out Friday in Mong Kok, a tightly packed neighborhood of shops and residences where protesters have occupied one of the city's busiest intersections.
"The first man was a 30-something-year-old man," witness Jessica Cheung told CNN. "He came in around noon, started yelling and causing a scene. Then some middle-aged men started coming in one at a time, like bang, bang, bang, from every side, saying 'You're in my way, I have to go to work, I have to make a living.'"
The men, who did not appear to be from the area, tried to tear down protesters' tents and got into scuffles with protesters, Cheung and other protesters said.
"I am a little bit scared. I haven't seen anything like this before," one protester told CNN. "We'll do our best to stay calm here, do what we can."
Another protester, Wilson Wong, said the crowd encircling the protesters was intimidating.
"We just want a peaceful dialogue, but we're scared because they're using violence," he said. "We're very nervous and our hands are shaking, even as we hold on to each other."
The crowds opposing the protesters in Mong Kok expressed anger about the disruption posed by the demonstrations, which have choked one of the busiest intersections in Hong Kong.
"They've been here for nearly a week. They need to clear out. It's ruining our economy, they just need to leave," said Joe Lee, one of the men angry with protesters.
Hong Kong's police superintendent warned that demonstrators should clear the busy Mong Kok intersection they are occupying or face arrest.
Police will begin dismantling protest barriers, and anyone remaining at the site could be arrested, Superintendent Mok Hing-wing said at a news conference broadcast by Hong Kong media.
Despite the warnings, the crowd at the site grew "exponentially" after the clashes, Kong said.
Hong Kong protests: What's next?
'We don't trust you'
At the main protest site outside the embattled chief executive's office building, several dozen police officers were on guard Friday, carrying helmets, shields and, in a few cases, batons.

Hong Kong protests reminiscent of '89
As the working day began, protesters chanted, "It's 9 a.m., where is he?" referring to Hong Kong Chief Executive C.Y. Leung. They mockingly called him a "turtle" for refusing to show his face.
Demonstrators blocked two vehicles from entering the government offices, which the government had declared temporarily closed. Authorities said the vehicles contained food, water and medical supplies for police.
At one point, police forced their way through demonstrators to make way for an ambulance they said contained a police officer who had collapsed, CNN's Ivan Watson reported.
Meet the 17-year-old student agitating for change
Protesters told police to carry out the officer, yelling, "We don't trust you!" before police wearing helmets made their move. A police representative said the officer was in serious condition.
Police issued a statement condemning the gathering as "irresponsible," saying it had "paralyzed traffic and seriously impacted emergency services and people's daily lives."
It denounced the decision to block the police vehicles bearing supplies as "inhumane and unacceptable anywhere in the world."
Earlier, Leung said there was no current plan to clear the remaining protesters, their numbers significantly reduced from the massive crowds that turned out on public holidays the previous two days.
"Currently, we do not have any plan, but as I ... said, nowhere else in the world would tolerate protesters surrounding government headquarters indefinitely," he told reporters.
Protest demands
Demonstrators are upset with a recently enacted policy giving Beijing veto power on who can run as a candidate for the chief executive role in the 2017 election.
A new electoral system will, for the first time, let the city's 5 million eligible voters pick a winner, rather than a 1,200-member committee stacked with Beijing loyalists that has chosen past leaders.
Critics argue that the right to vote is pointless if the candidates are handpicked by Beijing. They complain the Chinese government is encroaching too much on the affairs of Hong Kong, a semiautonomous Chinese territory ruled according to the "one country, two systems" policy since the 1997 handover from Britain.
Leung's steadfastness against the protesters' demands has led them to call for his resignation. Amid protesters' threats to occupy government buildings, he warned there will be "serious consequences" if police lines are crossed.
Patience wearing thin?
The pro-democracy activists still occupy crucial parts of the Asian financial hub. But patience may be wearing thin as the Hong Kong government reopened Friday after two public holidays.
Some bank branches in the city were closed, as were all schools in the Central and Western districts

Why don't Hong Kong & China get along?

Hong Kong protester: I had to be here
The government said protests have had "increasingly serious impacts on people's livelihood, Hong Kong's economy and even government operations."
A high-ranking Chinese official has denounced the protests as "illegal acts" while reiterating China's view that what happens in the special administrative region is purely a domestic matter.
"Hong Kong affairs are China's internal affairs," said Wang Yi, the Chinese foreign minister.
Protest leaders have urged more supporters to come out, saying that police are gathering supplies, including tear gas and pepper spray, to clear them out.
How tear gas united Hong Kongers
A CNN journalist saw containers being brought into the government offices Thursday evening labeled "round, 38 mm rubber baton," or rubber bullets.
It remains unclear how long the protests can maintain support and continue to draw the numbers that have so far clogged main arteries.
If the students "drag this on for a really long time, they're going to start losing some of their support," David Zweig, a professor at the Hong Kong University of Science and Technology, said as he stood at the main protest site.

Posted by firesprinklers at 9:32 AM